Jason Mallister is the Lord of Seagard and the head of House Mallister. He has at least one son, Patrek.

Lord Jason is a clean-shaven tall and lean man. His brown hair is mixed with white and he has fierce blue-grey eyes.[3] He has a gaunt, chiseled face with high cheekbones.[4][5]

Jason is known for his courtesy[3] and his honor.[6] Catelyn Stark thinks he is still handsome[3] and rides like a man who fears nothing.[4]

Jason's armor is indigo chased with silver,[7] and his helm is decorated with the wings of an eagle.[7][5]

Lord Jason is a renowned tourney knight, participating in several tourneys over the years. He was defeated in the tourney at Storm's End by Prince Rhaegar Targaryen and Ser Barristan Selmy.[8][9] As a bannerman to Lord Hoster Tully, he attended the wedding of Hoster's daughter, Catelyn, to Lord Eddard Stark at Riverrun, where his gifts were lavish.[4]

During Robert's Rebellion, Jason fought in the Battle of the Trident, slaying three of Rhaegar's bannermen.[7] During Greyjoy's Rebellion in 289 AC, he killed Rodrik Greyjoy beneath the walls of Seagard, throwing the ironborn reavers back into the sea.[10]

After the conclusion of Greyjoy's Rebellion, King Robert I Baratheon ordered a tourney at Lannisport to celebrate his victory. There, Lord Jason was defeated by the eventual champion, Lord Jorah Mormont.[11] 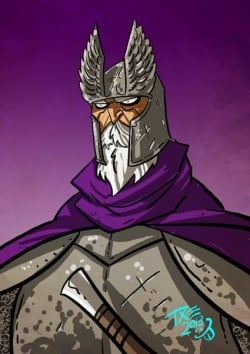 Lord Jason travels to King's Landing, accompanied by his son Patrek and a small party of knights and squires, to participate in the Hand's tourney. They travel from Seagard by the way of the kingsroad and pass Catelyn Stark and Ser Rodrik Cassel near the inn at the crossroads, but do not recognize them.[4] During the tourney, Jason defeats Ser Aron Santagar in a joust.[7]

In the opening weeks of war after the death of King Robert I Baratheon, Ser Kevan Lannister identifies Lord Jason and House Mallister as one of the only standing threats to the Lannister campaign in the riverlands but Lord Tywin Lannister disregards his brother, believing Jason is not strong enough to fight alone.[12] Grand Maester Pycelle sends ravens demanding that Jason and other riverlords swear allegiance to the new king, Joffrey I Baratheon.[13]

Once Robb Stark marches past the Twins, Lord Mallister adds his strength to Robb's and takes part in the battle in the Whispering Wood,[14] during which he captures Lord Gawen Westerling.[5] The Mallister eagle is one of the banners spotted during the Battle of the Camps.[15] After their victory, Jason sits at Robb's war council, where he suggests fortifying the riverlands and cutting off Tywin from supplies and fresh men. Robb is proclaimed King in the North at the council.[16]

When Robb announces his intention to send his friend, Theon Greyjoy, back to the Iron Islands as an envoy, Catelyn unsuccessfully suggests sending Jason instead. Jason returns to Seagard, accompanied by his son, Patrek Mallister, and Theon.[17] When he thinks his son is growing too close to the young ironman, Jason reminds Patrek whom Seagard was built to protect against.[10] As no ships from the Iron Islands await Theon on his arrival in Seagard, Jason believes the ravens Robb had sent from Riverrun to announce Theon's return had been lost and thus he sends his own birds.[10]

At the Battle of the Fords, Jason commands the defense of four fords along the Red Fork, including the one closest to Riverrun. Catelyn watches Jason's men defeat Lannister riders, and Jason later sends a messenger to inform Riverrun of Lord Flement Brax's defeat.[18]

When Robb returns to Riverrun from the westerlands, Jason is cool but courteous toward Catelyn, who released Robb's captive, Ser Jaime Lannister, without the king's permission.[5] Jason is one of the seven nobles who are chosen to launch the funeral boat of Lord Hoster Tully at Riverrun.[19]

Jason meets Robb at Hag's Mire on his march north to the Twins, bringing with him the captain of the Myraham, who brings news of Balon Greyjoy's death. Jason is ordered by Robb to send two Mallister longships into the Neck, one carrying Galbart Glover and the other Maege Mormont, to find Greywater Watch and inform Lord Howland Reed of Robb's plan to retake Moat Cailin.[3]

Robb intends for Catelyn to spend the rest of the war in safety with Lord Mallister at Seagard after Lord Edmure Tully weds Roslin Frey.[3] However, Robb and Catelyn are betrayed by Houses Bolton and Frey and murdered during the Red Wedding.[20]

Lord Jason surrenders his castle at Seagard to Black Walder Frey after he threatens to hang Jason's son, Patrek, who had been taken captive at the Red Wedding.[21] Black Walder keeps Jason as a prisoner inside his own castle, alongside his son.[22]

Jason: Seagard will be brightened by your presence, Lady Catelyn.


Catelyn: You would make me a prisoner.