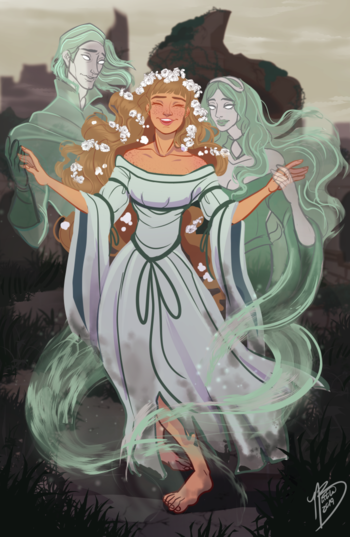 Jenny's song is a sad song, always requested by the ghost of High Heart as payment in exchange for telling the brotherhood without banners of her prophetic dreams. It is presumably about Jenny of Oldstones, who was acquainted with a woods witch, according to the tales.[1][2]

High in the halls of the kings who are gone, Jenny would dance with her ghosts...[3]

Arya Stark hears the song when the brotherhood without banners takes her to High Heart for the first time. The outlaws meet with the ghost of High Heart, who requests a song after telling them of her recent dreams.[4][5] Tom of Sevenstreams sings, accompanying the words with his woodharp. The song is so soft and sad that Arya can only hear snatches of the words, though the tune is half familiar to her.[4]

When the brotherhood go to High Heart a second time,[6] the dwarf woman requests the same song, which she associates with a "Jenny". As Tom sings she closes her eyes and rocks slowly back and forth, murmuring the lyrics and crying.[7]

When Robb Stark, King in the North, stops at Oldstones while en route to the Twins, Robb recalls a song about Jenny of Oldstones to his mother, Catelyn Stark.[8]

After the Red Wedding, the brotherhood waits for Merrett Frey to arrive at Oldstones with the ransom for his captured kin, Petyr Frey. When Merrett arrives, he hears Tom softly and sadly singing, "High in the halls of the kings who are gone, Jenny would dance with her ghosts..."[3]

—the ghost of High Heart to Tom of Sevenstreams

Let her savor her song in peace. It is all she has left.[7]

—Thoros of Myr to Arya Stark

She always makes me sing the same bloody song. Not a bad song, mind you, but I know others just as good.[4]

—Tom of Sevenstreams to Arya Stark

Robb: There's a song. 'Jenny of Oldstones, with the flowers in her hair.'
Catelyn: We're all just songs in the end. If we are lucky.[8]