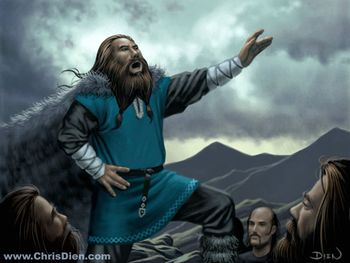 Any captain who owns a ship may participate when a kingsmoot is held,[1] as it is said among the ironborn that "every captain is a king upon the deck of his own ship".[3] Candidates may try to sway his fellow captains with a speech on his prowess and gifts to show his generosity; only once a vast majority call out a candidate's name to proclaim him king does the kingsmoot end.[4]

In antiquity, each of the Iron Islands was ruled by a rock king and a salt king chosen in a kingsmoot by the island's captains. The kings were usually from the same noble house and were often father and son, but sometimes they were from rival houses. Priests of the Drowned God called for kingsmoots whenever a king died.[1]

Eventually, the prophet Galon Whitestaff called all of these petty kings and captains to Nagga's Hill on Old Wyk to choose a high king to rule all of the ironborn. Urras Greyiron was thus chosen as the first High King of the Iron Islands since the Grey King. Erich I Greyiron claimed Urras's crown after his father's death, but Galon objected since Erich had not been chosen in a kingsmoot. An assembly at Old Wyk instead chose Regnar Drumm and condemned Erich to death, although Erich avoided his fate by abdicating and breaking Urras's crown.[1]

Besides Urras Ironfoot, other famous driftwood kings chosen at the Old Wyk kingsmoots include Sylas Flatnose, Harrag Hoare, and the Old Kraken, Loron Greyjoy.[2] When a high king died, his driftwood crown was broken and returned to the sea, and his elected successor would then create a new crown.[1]

Once a candidate put himself forth, he was bound to the kingsmoot's decision. Only once in the history of the Iron Islands has a kingsmoot been declared unlawful. When King Urragon III Greyiron died, his family called a kingsmoot while his eldest son, Torgon Greyiron, was off at sea raiding. The kingsmoot raised up Urrathon IV Goodbrother, whose first act was to put all of Urragon's present kin to death. Torgon the Latecomer returned two years later and claimed the kingsmoot was unlawful since he, the previous king's son, was not present to put forth his candidacy as was his right. Since Urrathon was bloodthirsty and his cruelty made him many enemies, the priests and ironborn denounced him and raised Torgon to be the new king.[1]

Torgon and his son, King Urragon IV Greyiron, both ruled without being chosen by a kingsmoot. The priests of the Drowned God insisted upon a kingsmoot when Urragon IV died, however. This last kingsmoot turned into a bloodbath, with Urron Greyiron having his men kill all the other attendees. Urron Redhand declared himself the King of the Iron Islands and set up the hereditary rule of House Greyiron, who wore an iron crown instead of individualized driftwood crowns. His line is said to have lasted a thousand years until the coming of the Andals.[5][6]

There are conflicting accounts of the time of the most recent kingsmoot. While Archmaester Haereg's History of the Ironborn states there has not been a kingsmoot for four thousand years, according to Maester Denestan's Questions, it has been two thousand years.[7]

Aeron Greyjoy declares a kingsmoot as the proper way to raise the next King of the Isles and the North after the death of his eldest brother, Balon Greyjoy. This move is made by Aeron to end a potential civil war between the ironborn and to prevent Euron Greyjoy from taking the Seastone Chair.[2]

During the kingsmoot on Old Wyk, each candidate is supported by three champions. Euron is eventually chosen.[4]

Meldred: A kingsmoot? There has not been a true kingsmoot in ...
Aeron: ... too long a time! Yet in the dawn of days the ironborn chose their own kings, raising up the worthiest amongst them. It is time we returned to the Old Way, for only that shall make us great again.[2]

A kingsmoot. This is something new ... or rather, something very old.[7]