Kingswood
The crownlands and the location of the kingswood

Kingswood
The stormlands and the location of the kingswood 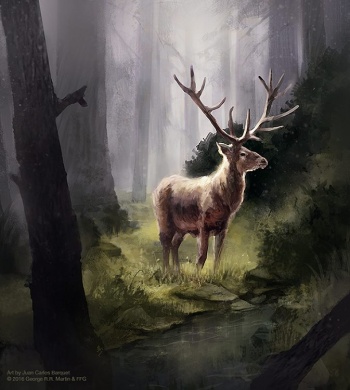 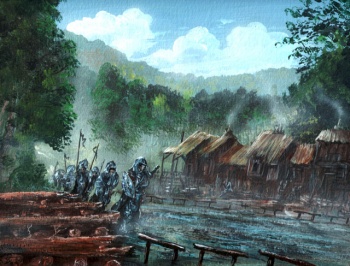 The kingswood is a large forest that lies across the Blackwater Rush from King's Landing. It is in the southern crownlands and the northern stormlands and is traversed by the kingsroad.[1]

Originating from a narrow lake in the forest, the Wendwater is the largest river in the kingswood.[2] Felwood is located in the southern outskirts of the forest.[1] Although it is rainy, the region is fertile enough.[3]

The kingswood contains a private hunting area for the king on the Iron Throne. However, some smallfolk live in villages in the forest.[4] The depths of the forest have many places ideal for hiding outlaws.[5]

In the Dawn Age the kingswood was part of a vast primeval forest which also included the current rainwood.[6]

The forest as far as the Blackwater Rush was once within the domain of the Storm Kings of House Durrandon. In the aftermath of Aegon's Conquest, however, the lands of House Baratheon of Storm's End were bounded in the north by the south bank of the Wendwater and the southern kingswood.[7] The northern portion of the kingswood became part of the crownlands of House Targaryen of King's Landing.

During the Faith Militant uprising, Pooxy Jeyne Poore led Poor Fellows against King Maegor I Targaryen’s forces in the kingswood.[8]

Prince Baelon Targaryen fell ill while hunting in the kingswood in 101 AC, and he died five days later.[9]

During the Dance of the Dragons, Trystane Truefyre promised that starving smallfolk could take deer, hares, and rabbits from the kingswood, but not boar or elk. [10] Lord Borros Baratheon seized the capital and ended the Moon of the Three Kings, however.[11] Outlaws in the forest proved troublesome during the regency of Aegon III.[12]

King Aegon IV Targaryen sent siege engines in the shape of dragons to attack Dorne, but almost a quarter of the kingswood burned when the seven mechanical dragons caught fire.[13]

The kingswood suffered several fires during the drought of 211 AC.[14]

The forest was the hideout of an infamous band of outlaws, the Kingswood Brotherhood. In order to turn the smallfolk against the outlaws, Ser Arthur Dayne negotiated for villagers to have expanded grazing lands, the right to fell some trees, and the right to hunt a few of the king's deer in autumn.[4]

King Robert I Baratheon was hunting in the kingswood when Queen Cersei Lannister gave birth to Prince Joffrey Baratheon.[15]

King Robert I Baratheon is hunting a white hart in the kingswood[16] when he is mortally wounded by a boar.[17]

Tyrion Lannister, the acting Hand of the King to Joffrey I Baratheon, opens the kingswood to any hunter willing to cross the Blackwater Rush.[18]

Tyrion sends expert woodsmen and the Vale mountain clansmen who had accompanied him to King's Landing to the kingswood in preparation for Stannis Baratheon's imminent arrival. There they prey on Stannis's baggage train and harry his flanks.[19] Leading Stannis's vanguard, Ser Guyard Morrigen burns part of the kingswood to smoke out the clansmen;[20] Sansa Stark can see the fire and smoke from the Red Keep.[21]

After the Battle of the Blackwater, the Stone Crows remain in the kingswood.[22] Sansa Stark and Margaery Tyrell cross the Blackwater Rush and find its northern edge to be a wilderness of ash and charcoal and dead trees.[23]

Doran Martell, Prince of Dorne, has been informed of scheming by Cersei Lannister. His son Trystane is to be ambushed by supposed outlaws in the kingswood while traveling in the company of Ser Balon Swann to King's Landing.[25]

You have a good eye and a steady hand, but you'll need a deal more to best a man of the kingswood.[26]