Knight of the Laughing Tree

The Knight of the Laughing Tree was a mystery knight who fought at the tourney at Harrenhal in 281 AC. He defended the honor of a crannogman by challenging and defeating three knights whose squires had bullied the crannogman, demanding that they chastise the squires in order to ransom back their horses and armor.

The Knight of the Laughing Tree is so-called because of the blazon on his shield, a smiling weirwood. His true identity remains unknown. According to a semi-canon source, the bullied crannogman was Howland Reed.[1]

Most of what is known about the Knight of the Laughing Tree comes from a story told by Meera Reed to Bran Stark. As an introduction to her story, Meera suggests that this knight "might have been a crannogman", to which Jojen Reed adds "or not". Jojen expects Bran to have heard this tale "a hundred times" from his father, Eddard Stark, but Bran denies any knowledge of the tale. He later explains that Old Nan was the one narrating stories to him, not his father.[2]

According to Meera's tale, a crannogman—most likely her own father, Howland Reed—attended the tourney at Harrenhal, finding there Aerys II Targaryen ("the king") and Rhaegar Targaryen ("the dragon prince"). With the Targaryens were the Kingsguard ("the White Swords"), there to welcome Jaime Lannister ("a new brother") into their ranks. Based on their known composition of the time, the knights present would be Lord Commander Gerold Hightower, Jonothor Darry, Arthur Dayne, Lewyn Martell, Barristan Selmy, and Oswell Whent.[2][3]

Among the lords present in the tourney were Robert Baratheon ("the storm lord") and Mace Tyrell ("the rose lord"). Notably absent was Tywin Lannister ("the great lion of the rock"). Meera reports that Tywin had quarelled with Aerys and intentionally stayed away. However, many of the knights and bannermen of House Lannister did attend the tourney.[2][3] Among the women present were Elia Martell ("the wife of the dragon prince") and a dozen of her lady companions.[2][3] Walter Whent of Harrenhal hosted the tourney. His daughter reigned as queen of love and beauty at the opening of the tourney, though her title had to be defended against challengers. Her champions were her four brothers and famous uncle, Oswell Whent.[2][3] 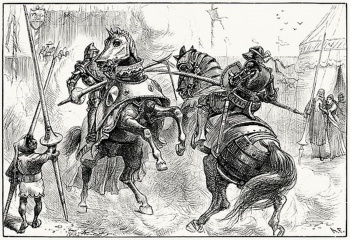 Jousting illustration dating to 1881. Artwork by Alfred Fredericks, currently in the public domain. Used to illustrate the duel of the Knight of the Laughing Tree and the Porcupine Knight in the "Art of Ice and Fire" website.

The crannogman found himself bullied by three squires, none older than fifteen-years-old. He had already "grown to manhood", but the boys were all larger than him in size. His only offensive weapon, a three-pronged spear, was easily snatched away by his opponents. He was then thrown into the ground. His assailants repeatedly mocked him, shoved him, and kicked him. Help arrived in the person of Lyanna Stark ("the she-wolf"), who shouted indignantly that Howland was her father's bannerman. She beat off his attackers with a tourney sword, scattering them away.[2][3]

The crannogman was wounded and Lyanna took him back to her "lair", probably a tent. She cleaned his wounds and bound them with linen, then introduced the guest to her brothers Brandon Stark ("the wild wolf"), Eddard Stark ("the quiet wolf"), and Benjen Stark ("the pup"). That evening, Lyanna persuaded the crannogman to attend the feast marking the start of the tournament. She insisted that he was highborn and had as much right to attend as anyone. The "wolf maid" was not easy to refuse. Benjen found a suitable garb for the man. Within Harrenhal, he ate and drank with the Starks. Their table also included certain Stark sworn swords, notably members of Houses Dustin ("barrowdown men", men from the barrowlands or Barrowton), Hornwood ("moose"), Mormont ("bears"), and Manderly ("mermen").[2][3]

During the feast Prince Rhaegar Targaryen, a noted musician, performed a sad and beautiful song that made Lyanna weep; when Benjen teased her for crying, she poured wine over his head. A recruiting officer of the Night's Watch was there, trying to convince knights to join the Watch. Robert Baratheon was involved in a drinking contest with Richard Lonmouth ("the knight of skulls and kisses"). Meera notes in passing that Robert won the contest. The crannogman focused his attention on Ashara Dayne ("a maid with laughing purple eyes"), a companion of Elia, who was dancing in turns with various partners. First a member of the Kingsguard (either her brother Arthur Dayne or infatuated Barristan Selmy), secondly Oberyn Martell ("a red snake"), third Jon Connington ("the lord of griffins"), and lastly Eddard Stark. Eddard was too shy to ask her for a dance, so Brandon asked her on behalf of his brother.[2][3][4]

Still during the feast, both the crannogman and Lyanna recognized the three bullying squires. One served a pitchfork knight (House Haigh), one served a porcupine (House Blount), and the last boy served a knight of two towers (House Frey). She pointed them out to her brothers. Benjen offered to find the crannogman a horse and armor in order to avenge himself. He failed to reply, torn with indecision. His pride demanded vengeance, but he was afraid of losing and making a fool of himself, bringing shame to his people in the process. He was no knight and was not used to horses and lances. Before going to sleep at the tent of Eddard, as the "quiet wolf" had offered him hospitality, he prayed to the old gods.[2][3]

During the first two days of the tournament, the porcupine knight, pitchfork knight, and the knight of the two towers each won a place among the champions, all in jousting. Late on the afternoon of the second day, a mystery knight "short of stature" appeared in the lists. His armor was made up of mismatched armor bits and pieces that appeared ill-fitting on him. His shield was blazoned with the image of "a white weirwood with a laughing red face". The tale earlier mentions that the crannogman had with him "a leathern shield" but does not specify whether this was the same shield. The mystery knight challenged and defeated all three of the previously mentioned knights, winning custody over their horses and armor. None of them were particularly popular, so the smallfolk cheered for the mysterious "Knight of the Laughing Tree". When the defeated trio sought to ransom back their former property, the knight declared his terms, that they ought to teach their rude squires honor. His voice sounded "booming" through his helm. The trio proceeded to chastise their squires sharply.[2]

The mystery knight attracted unwanted attention. Robert Baratheon and Richard Lonmouth were determined to unmask him, while King Aerys was certain that the man was his enemy.[2] The king was convinced that the tree on the mystery knight's shield was laughing at him. He decided that the mystery knight was Ser Jaime Lannister, who had returned to the tourney, defying Aerys's order to protect Queen Rhaella and Prince Viserys in King's Landing. Aerys told his beliefs to every man who would listen, and furiously commanded his own knights to defeat the Knight of the Laughing Tree when the jousts resumed the next morning, to unmask and expose him.[5]

However, by the next day, it was discovered that the knight had disappeared. The king became angered by this, certain that someone close to him had given warning to "this traitor who will not show his face."[5] An angry Aerys sent his men, including Prince Rhaegar, to search for the vanished knight, but only his shield could be found, abandoned in a tree.[2] 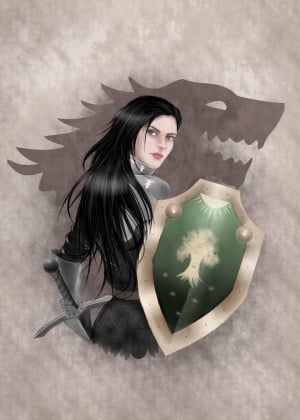 Lyanna Stark as the Knight of the Laughing Tree, by Luisa Cruz

Meera's story contains several potential clues about the identity of the mystery knight. Fans have often based their evidence for his supposed identity on the disappearance of Lyanna shortly after the tournament.[6][7]