Lorath is one of the Nine Free Cities. It is in a group of islands in the Shivering Sea near the northern coast of Essos.

Lorath is on the west side of the largest of three islands surrounded by stormy seas.[2] It is at the mouth of Lorath Bay and, except Braavos, is the northernmost of the Free Cities. The second-largest island is Lorassyon, but there are a score of smaller isles.[1] To the south of the isles is a thickly forested peninsula. The Lorathi also claim dominion over the waters of Lorath Bay, but fishing fleets from Braavos and whalers and sealers out of Ib often venture into the bay, for Lorath does not have sufficient strength to make good its claim.[1] To the east is the Axe and the west Braavos.[3] Morosh at the Sarne delta is a Lorathi colony.[4] The Lorathi isles are bleak and stony, but in their waters plenty of cod, whales, and grey leviathans can be found, and colonies of walrus and seal.[1] 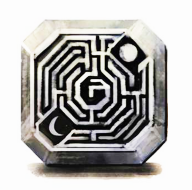 A coin of Lorath, as depicted by Nutchapol Thitinunthakorn in The World of Ice & Fire

According to a semi-canon source, Lorathi men often dress richly and are commonly believed to be poets and merchants.[5]

The followers of Boash did not eat flesh, nor drink wine. They went about barefoot, dressing in hair shirts and hides, and their priests were eunuchs who wore eyeless hoods. The cult of Boash believed in extreme self-abnegation, and because all humans were equal before their god, they considered women to be equal to men in all matters, nor did they practice slavery. This denial of the self extended to the point that adherents came to refer to themselves and others using indefinite pronouns; they did not use names, and referred to themselves as "a man" and "a woman", instead of saying "I", "me", or "mine". While the cult of Boash has long gone extinct, certain of these speaking habits are still used in Lorath today. Nobles regard it as vulgar to speak of one's self directly.[1] When one of the Faceless Men of Braavos uses the identity of "Jaqen H'ghar" of Lorath, he uses this speech pattern.[6]

Lorath used to be ruled by three princes: the Harvest Prince, the Fisher Prince, and the Prince of the Streets. These princes, once chosen, served for life. All are chosen by vote: the Harvest Prince by those who own land upon the islands, the Fisher Prince by all who own ships, and the Prince of the Streets by the acclamation of the free men of the city. While the council of princes still exists today, their titles have become ceremonial. The actual rule of Lorath now resides with a council of magisters made up of nobles, priests, and merchants.[1]

Salt cod, walrus tusks, sealskins, and whale oil form the greater part of Lorath's trade.[1] According to a semi-canon source, the city's powerful textile merchants specialize in rich velvet, which they trade for steel. The steel is traded along the Shivering Sea for furs, ivory, and obsidian, which are then traded for the materials to make velvet.[5]

Though the Lorathi possess a large fleet of fishing vessels, they have little military power, and build few warships. Not many Lorathi ever leave the islands. Even fewer Lorathi make their way to Westeros. Instead, Lorath prefers to trade with their near neighbors, Norvos, Braavos, and Ib.

Lorath is accounted as the poorest of the Free Cities and the most isolated and backward.[1] Jorah Mormont believes the city to be insignificant economically.[2] 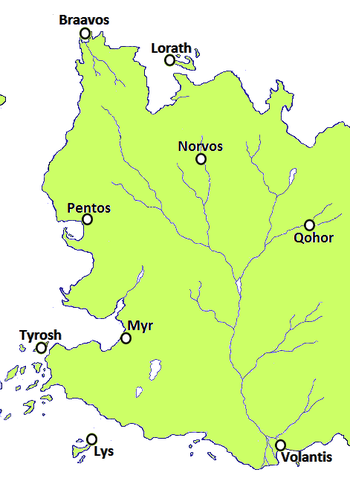 Ancient Lorath was inhabited by a people known as the mazemakers, who created mazes on the islands and on mainland Essos to the south. The mazemakers were followed first by a race of hairy men similar to the Ibbenese, and then by the Andals, with each island having its own king. The largest of the islands even had four kings.[1]

For the next thousand years, the Andals fought among each other, until the Andal warrior Qarlon the Great united the Lorathi isles under his rule, raising a great wooden keep on Lorassyon in the center of the vast haunted maze, which he decorated with the heads of those foes he had slain. Qarlon wanted to become king of all Andals, and he conquered petty kingdoms over twenty years. Norvos eventually closed the rivers against him, causing Qarlon to march against the city. Norvos called to the Valyrian Freehold for help, and as Qarlon laid siege to Norvos, the dragonlords came to the aid of their daughter. Qarlon and his army were burned, and the dragonlords flew to Lorath where the city was destroyed in the Scouring of Lorath. It is said that no one survived.[1]

For more than a century, the Lorathi isles remained uninhabited. It was said that the islands were haunted, and the whalers from Ib who went ashore to find freshwater did not dare to venture inland.[1]

In 1,436 BC, Valyrian worshippers of the Blind God Boash travelled to Lorath and founded a temple on the main isle, settling in the ancient mazes of the first Lorathi, turning them into their towns, temples, and tombs. For three-quarters of a century, they dominated the islands. However, more and more people who did not share their faith travelled to Lorath and built villages. In time, the islands became a refuge for freedmen and escaped slaves, as the priests of Boash taught that every man was equal. Three of such fishing villages on the western part of the largest isle grew so populous and prosperous that they merged into a town. In time, the town became a city.[1]

The numbers of newcomers swelled while the numbers of the followers of Boash dwindled, and as the worship fell away, the remaining priests became more corrupt. Eventually, the colonists rose in rebellion. The acolytes of Boash who remained were killed, though several managed to flee to the great temple maze on Lorassyon, where they remained until the last of them died, the best part of a century later.[1] The Cult of Boash died out roughly around 700 BC.[1]

Afterward Lorath became a freehold owing allegiance to the Valyrian Freehold, ruled by a council of three princes: the Harvest Prince, the Fisher Prince, and the Prince of the Streets. The princes continue to sit today, though their titles are purely ceremonial. The true authority now lies in a council of magisters made up of nobles, priests, and merchants.[1]

The relative isolation of Lorath led it to be little involved in the Century of Blood after the Doom of Valyria, save for those Lorathi who sold their swords to Braavos and Norvos.[1]

Corlys Velaryon visited Lorath and the Port of Ibben during a voyage on Ice Wolf.[7] Lorath's trade was affected when the Triarchy collapsed and the Daughters' War broke out in the narrow sea. Lorath allied with Braavos and Pentos during the war,[8][9] but the Lorathi eventually withdrew.[10]

Arya Stark meets Jaqen H'ghar, who claims to be Lorathi, though he is really a Faceless Man of Braavos.[11] He dyes one half of his hair red and the other white.[6]

Lord Commander Jon Snow considers sending his sister Arya to Lorath on account of its geographical isolation, though he later discovers the grey girl on the dying horse who approaches Castle Black is not Arya but Alys Karstark.[12]

In Braavos, Arya observes a fat Lorathi man at Pynto's tavern in complaining about the size of his booth.[13]