As a girl, Princess Maegelle was gentle, quiet, studious, and exceedingly bright, and was said to read from the Seven-Pointed Star every night before sleep, and was eager to take the vows.[1] She was known for her compassion, and her gift for healing.[3] 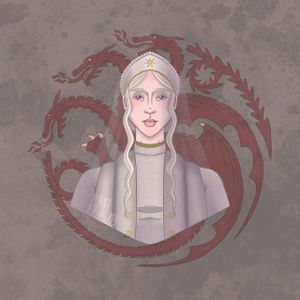 As a child, Maegelle attached herself to her elder sister, Princess Alyssa, much as Alyssa herself had done to Prince Baelon when she was younger. Alyssa did the best she could to evade Maegelle, bristling at "the baby" at her skirts. Later, she was the guiding star of her younger sister, Daella.[1]

Maegelle was promised to the Faith of the Seven in 73 AC at the age of ten as a novice and eventually became a septa. Queen Alysanne announced that this was in thanks for the Mother blessing her with many children.[1]

When Princess Daella was failing to agree to a suitable match, Maegelle told her mother that the Faith would not want her if she stayed unmarried, as Princess Daella could not read her prayers.[1]

After her sister Saera was involved in a scandal, it was announced that Maegelle was to take charge of her instruction as a novice silent sister.[1]

In 87 AC, Maegelle took leave from her sept to stay with her grieving mother, who had lost her daughters Alyssa, Daella, and Viserra in the space of five years.

In 89 AC, Jaehaerys visited his daughter in Oldtown during the First Quarrel. It was Maegelle who helped reconcile the king and queen in 90 AC, telling her father to conciliate with Alysanne in time for the wedding of her niece, Rhaenys[1]

Maegelle also played a role in the Second Quarrel, which had begun in 92 AC, when her father, King Jaehaerys I, chose Maegelle's brother, Prince Baelon, as his heir over Maegelle's niece, Princess Rhaenys. This decision angered Queen Alysanne, as she felt there was no reason to favor a man over a woman. Maegelle brought the two back together, solving the Quarrel in 94 AC.[3]