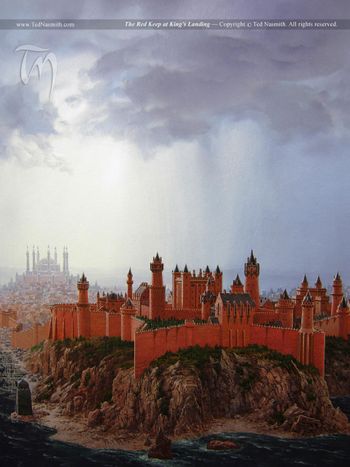 Maegor's Holdfast is within the Red Keep, art by Ted Nasmith ©

Maegor's Holdfast is a massive square fortress inside the heart of the Red Keep in King's Landing. Named after King Maegor I Targaryen, it is a castle-within-a-castle and is the strongest place in the Red Keep.[1]

The holdfast lies behind walls twelve feet thick.[2] A dry moat lined with a bed of formidable iron spikes surrounds it, with a drawbridge spanning the moat.[3] The only way in or out of Maegor's is across the drawbridge. A knight of the Kingsguard is usually, but not always,[4] posted at its far end.[5] However according to Lord Varys there is a secret egress built at the behest of King Maegor I.[6]

The royal apartments are located in Maegor's Holdfast. The king's bedchamber has a canopied bed and twin hearths.[2]

The Queen's Ballroom within Maegor's Holdfast is much smaller than the Great Hall of the Red Keep or the Small Hall of the Tower of the Hand. The graceful ballroom seats one hundred and has beaten silver mirrors behind the wall sconces which makes the torchlight seem twice as bright. Its walls are paneled with richly carved wood and it has a gallery above the main floor. High arched windows sit along the south wall.[7]

Ser Lucamore Strong of the Kingsguard was guarding the bridge across the dry moat when the dying Princess Aerea Targaryen returned on Balerion.[10]

The death of King Viserys I Targaryen in his apartments in Maegor's Holdfast led to the civil war known as the Dance of the Dragons. The small council gathered in the apartments of Queen Alicent Hightower and supported the claim of her son, Aegon II Targaryen, with the exception of Lord Lyman Beesbury. By the time Prince Aemond Targaryen took his leave on Vhagar for Storm's End the stink from the dead king's bedchamber had wafted all through the holdfast.[12] Aegon II moved into Maegor's Holdfast with his queen and sister-wife, Helaena Targaryen.[13] Cheese knew of no way in and out of Maegor's save over the drawbridge, so he and Blood instead infiltrated the Tower of the Hand to murder Prince Jaehaerys.[13]

After the fall of King's Landing to Aegon II's rival, Queen Rhaenyra Targaryen, Alicent emerged from Maegor's and attempted to treat with her stepdaughter but Rhaenyra rejected her proposal. Rhaenyra's men found Aegon wife, the mad Queen Helaena, locked in her bedchamber. When they broke down the doors of Aegon's apartments they discovered only his empty bed and a full chamberpot.[14]

As Rhaenyra was losing her grip on the Iron Throne, Helaena threw herself from her window in Maegor's Holdfast. She died impaled upon the iron spikes that lined the dry moat below. During the Storming of the Dragonpit, Queen Rhaenyra watched the attack unfold from the roof of Maegor's Holdfast with her sons and members of her court, including Mushroom.[15]

Aegon II lost much of his support after the Battle of the Kingsroad. Turncloaks turned against Aegon the Elder, and Ser Perkin the Flea pushed Ser Alfred Broome off the drawbridge before Maegor's Holdfast onto the spikes below.[16]

During the Lysene Spring, the Lyseni at court were rumored to perform blood sacrifice within Maegor's Holdfast.[19] King Aegon and his brother, Prince Viserys, sought refuge in the redoubt during the so-called secret siege. Sandoq the Shadow slew Ser Amaury Peake and his guards on the drawbridge of the holdfast.[19]

Amid Robert's Rebellion, Ser Gregor Clegane and Ser Amory Lorch scaled the walls of Maegor's Holdfast during the Sack of King's Landing.[21] They made their way to the royal nursery within, where they slew Princess Elia Martell and her children, Princess Rhaenys and Prince Aegon Targaryen.[22]

King Robert I Baratheon dies in Maegor's Holdfast after being gored by a boar while hunting in the kingswood. After the downfall of Lord Eddard Stark, the Hand of the King, his eldest daughter, Sansa, resides at the top of the highest tower of Maegor's Holdfast.[3]

During the Battle of the Blackwater almost every highborn woman in the city takes refuge in the Queen's Ballroom in Maegor's Holdfast, along with a handful of old men and boys.[7] Queen Regent Cersei Lannister recalls her son, King Joffrey I Baratheon, during the battle and closes Maegor's.[23]

Tyrion Lannister recovers from the Blackwater in a chamber above the Queen's Ballroom, as Lord Tywin has taken his son's former chamber in the Tower of the Hand.[1] After marrying Sansa, Tyrion moves from Maegor's Holdfast and displaces Lord Gyles Rosby in spacious apartments atop the Kitchen Keep.[24]

On the morning of his royal wedding, King Joffrey receives gifts in the Queen's Ballroom after breakfast is cleared.[25]

Ser Kevan Lannister notes that the dry moat surrounding Maegor's Holdfast is three feet deep in snow and that the iron spikes that line it are glistening with frost. Kevan sups with his niece, Queen Cersei Lannister, and her son, King Tommen Baratheon, in the royal chambers. Tommen tells Kevan that the bad cat was outside his window the previous night.[5]

Sansa pulled the hood of her cloak up over her ears, and hurried toward Maegor's Holdfast, the castle-within-a-castle where the queen had promised they would all be safe.[7]

Here in Maegor's Holdfast, every servant was in the queen's pay.[1]