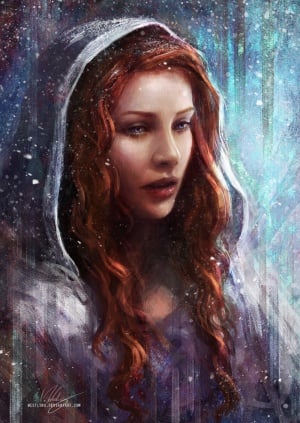 Despite being married to Tyrion Lannister, Sansa Stark has remained a maid.
© Isabel Westling
Not to be confused with the Maiden, one of the seven gods of the Faith.

A maid or a maiden usually refers to a virgin woman. Maidens may be wedded and bedded; However, many husbands will wait until the bride is fifteen or sixteen before sleeping with them. Very young mothers tend to have significantly higher rates of death in childbirth, as noted by the maesters.[1]

A guarantee of a woman's virginity is normally the presence of a maidenhead. Women are generally expected to be virgins on their wedding night, more so for noblewomen. However, noblewomen are more likely to lose their maidenheads during horseback riding, it is said, and proof of their maidenhead during the wedding night - a bloody sheet - is therefore not often insisted upon.[2] Nonetheless, men might refuse a bride if she is no longer chaste.[3]

The loss of a noblewoman's virginity can diminish her possibilities for marriage. When Ser Jason Lannister took the virginity of Lady Alys Stackspear, after which she became pregnant, his brother, Lord Tytos Lannister, insisted upon their marriage.[4] However, Lady Delena Florent, who had been deflowered by King Robert I Baratheon and given birth to his bastard son Edric Storm, was eventually offered Lord Tywin Lannister's youngest son, the dwarf Tyrion, as husband. While Lord Tywin himself made the offer, he considered it to be below the standards of his house nonetheless.[5]

Virginity can also be held in high esteem by the Dothraki. According to Magister Illyrio Mopatis, when Prince Viserys Targaryen attempted to claim his sister's maidenhead prior to her wedding to Khal Drogo, he would have undone years of planning,[6] implying that Khal Drogo would not have accepted Princess Daenerys as his bride if she had not come to him a virgin.

A price can be placed upon a girl's maidenhead. For example, Emma, a serving wench at the Quill and Tankard in Oldtown, determined that her daughter's maidenhead would cost a golden dragon.[7] Other forms of payment can also be used at times.[8]

A virgin man can also be referred to as a maiden[9] or a man-maid[10] on occasion.

In contrast to the rest of Westeros attitudes about sexuality are more relaxed in Dorne[11]. Therefore it is not expected by the Dornishmen that a woman stays a maid till marriage. Princess Arianne Martell lost her virginity to Daemon Sand when they were both fourteen years old, and their couplings had been both clumsy and ardent. Arianne recalls that it had been sweet.[12] Although her father Doran, Prince of Dorne, eventually learned of this, he did not react to it.[13]. Arianne continued to have multiple lovers over the years, including at least one of her childhood friends, as well as Ser Gerold Dayne of High Hermitage.[14][15][16][17]

—Lancel Lannister, on his chosen bride

Myrcella never shed a tear, though it was she who was leaving hearth and home to seal an alliance with her maidenhood.[13]