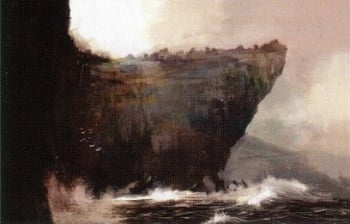 Massey's Hook is a peninsula in the crownlands that defines the eastern extent of Blackwater Bay.[1] Ships must sail around in order to get to King's Landing from the south.[2] The Gullet separates Massey's Hook from Dragonstone and Driftmark to the north, while southwest of the peninsula are the kingswood and the Wendwater.[3]

Stonedance, the seat of House Massey, was built on Massey's Hook by Lord Maldon Massey, a vassal of the Storm King Durran the Ravenfriend. The Masseys broke away during the reign of Durwald the Fat, however.[5]

At the time of the Andal invasion, the Storm King Erich the Unready battled the pirate king Justin Milk-Eye for control of Massey's Hook; this was eventually resolved when Qarlton II Durrandon defeated Josua Massey. Soon after the Andal warlord Togarion Bar Emmon traveled south of the Blackwater Rush and established a new kingdom on Massey's Hook with Sharp Point as his seat. The peninsula was eventually reclaimed by the Storm Kings, however.[6]

Prior to the War of Conquest, Massey's Hook was part of the stormlands owing allegiance to the Durrandon Storm Kings of Storm's End. The Bar Emmons and Masseys had developed closer ties with the Targaryens of Dragonstone, however, and allied with Aegon Targaryen against the Storm King Argilac the Arrogant.[8] After Aegon the Conqueror's victory, Massey's Hook became part of the new crownlands owing allegiance to the Targaryens reigning in King's Landing.

The Fourth Blackfyre Rebellion began when Daemon III Blackfyre and Aegor Rivers landed on Massey's Hook, but they were defeated in the Battle of Wendwater Bridge.[9]

While sailing to King's Landing, Stannis Baratheon's fleet regroups along Massey's Hook after being scattered across the narrow sea by a storm.[10]