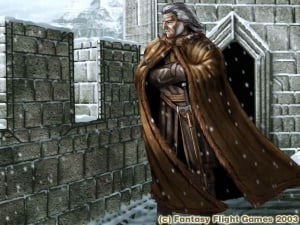 Master-at-arms is a position charged with training garrisons, as well as noble children, in fighting skills.[1][2][3] Masters-at-arms are often deadly warriors or knights.[4][5][6] They can provide blunted weapons for training instead of live steel.[7] Masters-at-arms are present at most castles in the Seven Kingdoms, including the Night's Watch,[8] although they are not used by the crannogmen.[9]

Ser Quentyn Ball, a master-at-arms at the Red Keep, supported Daemon I Blackfyre during the First Blackfyre Rebellion.[5]

Jon Snow has a contentious relationship with the master-at-arms of Castle Black, Ser Alliser Thorne.[8][12]

Dagmer Cleftjaw, the master-at-arms of Pyke,[13] joins Theon Greyjoy in the harrying of the Stony Shore.[6]

Jon, now Lord Commander of the Night's Watch, names the wildling Leathers as the new master-at-arms for Castle Black.[14]

Your squire looks in need of sustenance as well. He is so scrawny that all his hair has fallen out. We'll have him share a cell with other boys of his own age. He'll like that. My master-at-arms can train him in all the arts of war.[15]

Ser Quentyn Ball was the master-at-arms at the Red Keep. He taught my father and my uncles how to fight. The Great Bastards too.[5]

—Aegon Targaryen to Duncan the Tall