From A Wiki of Ice and Fire
(Redirected from Master of Coin)
Jump to: navigation, search 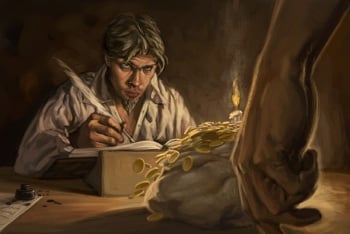 Littlefinger acts as the Master of Coin.
© Fantasy Flight Games

During the War of Conquest Crispian Celtigar served Aegon I Targaryen as the first master of coin. Nearly two centuries later, even though Elaena Targaryen's husband sat on the king's small council as master of coin, it was widely known that she was the one performing the duties.[2]

When Baelish goes to the Eyrie to court Lysa Arryn, Tyrion Lannister is named as his replacement, charged with funding the royal wedding. Tyrion is blamed for the so-called dwarf's pennies.[10] After Tyrion is imprisoned for the death of Joffrey, Tywin calls for Garth Tyrell to fill the post.

After the death of Tywin Lannister, Queen Regent Cersei Lannister renames the office lord treasurer, a style used in the Free Cities,[11] as well as in Sunspear.[12] When she hears Garth Tyrell will soon fill the seat, she appoints Lord Gyles Rosby to take the seat. When Lord Rosby dies, Ser Harys Swyft replaces him in the office.

Harys Swyft has traveled to Braavos to treat with the Iron Bank in person.

The master of coin finds the money. The king and the Hand spend it.[13]

The master of coin must be frugal.[14]

We owe Lord Tywin some three million dragons at present, what matter another hundred thousand?[13]