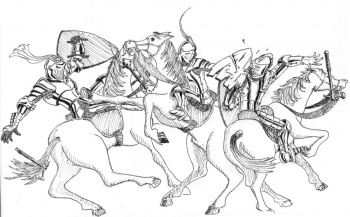 Tourney at Bitterbridge, art by o0Magnus 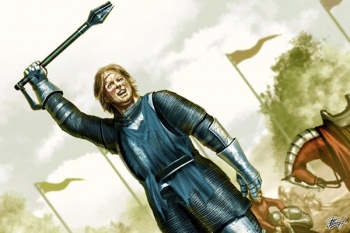 Having been crowned at Highgarden, Renly Baratheon travels with his supporters through the Reach toward King's Landing, which is held by his nephew, King Joffrey I Baratheon. Renly holds a melee beneath the castle of Bitterbridge along the way. Catelyn Stark, an envoy of her son Robb Stark, notices much of the Reach's chivalry near the castle, while across the Mander are the lords from the stormlands. While there are 116 competitors at the start of the melee, there are fewer than twenty knights remaining when Catelyn's party arrives. Brienne of Tarth singles out some men for having bet on who could claim her maidenhead. The melee continues until only two contestants are left, Brienne with a morningstar and Ser Loras Tyrell of Renly's Rainbow Guard with a longaxe. Loras yields to Brienne after being grappled to the ground, which a drunken Tyrell archer considers a vile trick. For her reward, Renly agrees to name Brienne to his Rainbow Guard.[1][2]

The melee had already started when Lady Catelyn Stark and her party, escorted by Ser Colen of Greenpools, came into Renly's camp. Her party was composed of twenty men:

This is madness. Real enemies on every side and half the realm in flames, and Renly sits here playing at war like a boy with his first wooden sword.[1]