Mole's Town
The North and the location of Mole's Town 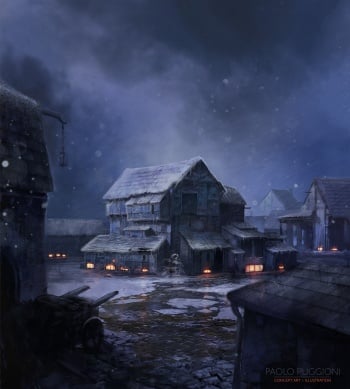 Mole's Town is a village close to Castle Black. It lies along the kingsroad in Brandon's Gift, half a league south of the Wall.[1] Jon Snow refers to the village's smallfolk as moles.[2]

Mole's Town is bigger than it seems. Three-quarters of the village lie beneath ground in deep damp warm cellars and vaults connected by a warren of tunnels. Buildings above ground include a smithy, a stable and a small number of hovels with shuttered windows and wooden slats.[3][4][5] Smallfolk in Mole's Town farm nearby fields.[3]

There is a brothel located in the cellars, with nothing more than a shack no bigger than a privy on the surface. It has a red lantern that is hung over the door. It is said that brothers of the Night's Watch go to Mole's Town to dig or mine for "buried treasure" (i.e. engage the services of prostitutes).[3]

Donal Noye restores the burned sword Longclaw, which Jeor Mormont then gives to Jon Snow. The sword's pommel is decorated with garnets purchased by Samwell Tarly in Mole's Town.[6]

Desiring to aid his half brother, Robb Stark, Jon deserts the Night's Watch and rides south past Mole's Town on the kingsroad. However, his friends convince him to return to Castle Black.[3]

Before embarking on the great ranging, many rangers go drinking and whoring in Mole's Town. To celebrate Grenn's first ranging, Halder, Pypar, and Todder pay for his first woman. Sam and Jon are invited as well, but they remain at Castle Black.[7]

Having escaped from Styr at Queenscrown,[8] Jon warns the people of Mole's Town of the upcoming attack by raiders of the free folk and Thenns,[4] with three quarters of the villagers choosing to escape to Castle Black.[2] The wildlings set the village afire on their way to the Wall.[2] Some villagers help the Night's Watch prepare for the attack on Castle Black, and a midwife assists Clydas and Maester Aemon with treating the wounded. Most villagers seek refuge atop the Wall, and the few fighting below have poor discipline.[2]

After the attack from the south is repulsed, most villagers return to Mole's Town, although Hareth, Zei, and three orphaned boys remain at Castle Black. When Mance Rayder threatens from north of the Wall, Jon sends Zei with a request for aid from the village, but she never returns. Jon then sends Mully, who finds the village deserted.[9]

After the battle beneath the Wall, Stannis Baratheon investigates Mole's Town.[10]

Free folk take refuge in the tunnels of Mole's Town.[11] Jon, now Lord Commander of the Night's Watch, posts guards around the village to separate the Night's Watch from wildling women, as well as prevent wildlings from venturing further south.[12] While delivering rations to the village, Jon finds the tunnels overcrowded with hungry free folk. In return for food and shelter at the Wall, sixty-three wildlings choose to work with the Watch.[5] Jon later sends ten Mole's Town wildlings each to Cotter Pyke and Ser Denys Mallister.[13]

Ty and Dannel find Alys Karstark two leagues south of Mole's Town.[14] Jon takes into custody her pursuer, Cregan Karstark, half a league south of the village before he can claim guest right.[15]

If we beheaded every boy who rode to Mole's Town in the night, only ghosts would guard the Wall.[3]

Mole's Town had always been larger than it seemed; most of it was underground, sheltered from the cold and snow.[5]