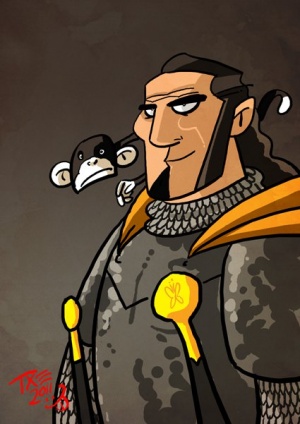 Ser Mark Mullendore and his pet monkey, by TheMico ©

A monkey is a non-hominoid simian. There are monkey species in the known world of A Song of Ice and Fire.[1][2]

The Isle of Cedars has many monkeys, which are agile and can howl.[2] On the isle, monkeys inhabit the broken pyramids in the ruined city of Ghozai.[3] Black-and-white monkeys come from the Summer Islands,[4] and tribes of monkeys swing through its rain forests.[5] According to Lomas Longstrider, the isle of Leng is home to "ten million monkeys".[6]

A legend from Yi Ti says that the Long Night was averted by the deeds of a woman with a monkey's tail.[7]

Monkeys were among the many goods traded between the Summer Isles and the Valyrian Freehold, as there was a fashion among the dragonlords for pet monkeys.[5]

Monkeys are known to be nimble, and to climb with agility and speed.[8][9][10][11] Victarion Greyjoy considers monkeys to be filthy, noisy beasts.[2] Mummers often have monkeys in their farces and plays.[12][13]

In Volantis, monkeys can be purchased on the Long Bridge.[14] Men from Yi Ti wear monkey-tail hats.[1] Trade goods include jade statues carved in the shape of monkeys.[15] There is a ship called the Brazen Monkey.[16]

Gerion Lannister taught his young nephew Tyrion some tumbling tricks, after which he practiced tumbling for six months, until his father Tywin told him to stop, telling him he was born a lion, not a monkey.[18]

Salladhor Saan wears a flamboyant tunic with jade buttons carved in the shape of monkeys.[19]

In Cobbler's Square in King's Landing, a begging brother rants about corruption in the city, calling Tyrion Lannister a "twisted little monkey demon" who controls the abomination King Joffrey Baratheon.[20] Tyrion is hurt by the title, and often uses it mockingly in reference to himself thereafter.[21][22][23]

Ser Mark Mullendore has a pet monkey, and joins Renly Baratheon beneath the walls of Bitterbridge. He feeds his monkey morsels at the feast.[24] Brienne of Tarth later recalls that Mark was a part of the wager over who would claim her maidenhead. He used his monkey to make her laugh in his attempt to woo her.[4]

Mark fights at the Battle of the Blackwater, losing part of his left arm and his monkey before getting captured.[25]

When Brienne of Tarth learns of Ser Mark Mullendore's fate, she remembers him sitting outside his pavilion with his monkey on his shoulder in a little suit of chainmail, the two of them making faces at each other.[4]

In Volantis, Quentyn Martell sees a number of animal sellers clustered together; some of the animals on offer are agile little monkeys with striped tails and clever pink hands. Ser Gerris Drinkwater suggests to Quentyn that Daenerys Targaryen might like a monkey.[27]

When Illyrio Mopatis and Tyrion Lannister meet with some of Illyrio's cohorts, he tells them Tyrion is called "Yollo". Tyrion thinks that Yollo sounds like something you might name a monkey, and says his mother called him Hugor Hill.[28]

The widow of the waterfront tells Tyrion she once had a monkey who could perform all sorts of clever tricks.[14]

Anchored near the Isle of Cedars, half of the Iron Fleet becomes infested with monkeys from the isle, even the Iron Victory. Victarion Greyjoy thinks that the isle should have been called the "Isle of Monkeys". He sends men up into the rigging to deal with the monkeys, but they prove themselves more agile than his crew. The antics of the monkeys amuse the crew, but they do not amuse Victarion, who dislikes laughter.[2]

The monkeys aboard the Iron Victory do not seem to like the red priest Moqorro, screaming and throwing their feces. As Moqorro heals Victarion's hand, he sings a strange high wailing song in High Valyrian, which appears to make the monkeys leave the ship, screeching as they leap into the water.[2]

The Iron Fleet's Lamentation chases down a trading galley, the Ghiscari Dawn, and both ships come so close to the haunted ruins of Ghozai that they can hear monkeys chattering as the first light of dawn washes over the city's broken pyramids.[3]

When attempting to help Quentyn Martell steal a dragon, Ser Gerris Drinkwater wears an ape mask and says his disguise "makes a monkey out of me."[29]

The monkeys were a plague. Would that I had a crossbow.[2]