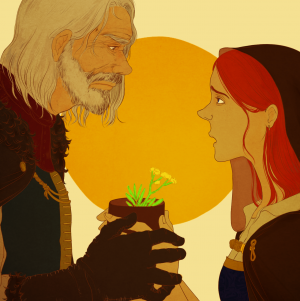 Moon tea or tansy tea is a medicinal herbal tea used in the Seven Kingdoms, as well as beyond the Wall, to prevent or abort pregnancies.

Moon tea is made generally by maesters and woods witches out of tansy, mint, wormwood, a spoon of honey, and a drop of pennyroyal.[1][2] Moon tea is commonly used without issues, but it can also have dangerous side effects.[3][4]

Devout members of the Faith of the Seven consider the use of moon tea to be murder.[5]

In 131 AC, Grand Maester Orwyle, disguised as "Old Wyl", mixed moon tea and potions of tansy and pennyroyal for the prostitutes from Mother's, a brothel in King's Landing, to abort unwanted children.[6]

In 282 AC, Lysa Tully became pregnant by Petyr Baelish. Lysa revealed her pregnancy to her father, Lord Hoster Tully, hoping that he would let her wed Petyr. Hoster, who had always felt Petyr was too lowborn,[7] instead forced Lysa to abort the child with moon tea provided by Maester Kym.[1] Lysa nearly died from the effects of the tea, and never forgave her father for it.[3][4]

A woods witch showed Asha Greyjoy how to brew moon tea after she lost her virginity to a Lysene sailor.[8]

As Lord Hoster Tully lies dying, he repeats the words "tansy", "blood", and asks for forgiveness. His daughter Catelyn Stark initially thinks her father is referring to a woman by the name of Tansy, but then deduces that he had forced her sister Lysa to abort a pregnancy.[9]

Lady Ravella Smallwood indicates that milkmaids across the riverlands have been drinking tansy tea to avoid becoming pregnant by Tom of Sevenstreams.[10]

Sansa Stark overhears Lady Lysa Arryn pleading her love to her new husband, Lord Petyr Baelish, telling him that she gave him her maidenhead and would have given him a son as well, but the pregnancy had been ended by moon tea. Lysa tells Petyr that it wasn't her choice, she never knew what substance her father had given her to drink, and Petyr reassures her that both Hoster and his maester are dead.[1]

When Margaery is arrested by the Faith of the Seven, the High Sparrow lists multiple crimes/sins she has committed, including murdering "the fruit of her fornications" by using moon tea.[5]

Grand Maester Pycelle feels that Lord Mace Tyrell dislikes him because of the moon tea he provided to Margaery, and says he would not have said anything about it if Queen Cersei had not commanded him.[13]

If Ygritte does not want a child, she will go to some woods witch and drink a cup o' moon tea. You do not come into it, once the seed is planted.[2]

I would have given you a son too, but they murdered him with moon tea, with tansy and mint and wormwood, a spoon of honey and a drop of pennyroyal. It wasn't me, I never knew, I only drank what Father gave me...[1]

Women only drank moon tea for one reason; maidens had no need for it at all.[12]

She has drunk of moon tea, to murder the fruit of her fornications in her womb.[5]

—the High Sparrow to Cersei Lannister, about Margaery Tyrell

Moon tea is based on natural herbal abortifacients. According to George R. R. Martin, he added some fantasy touches, as the actual recipe can be very dangerous, and should not be tried in real life.[14]