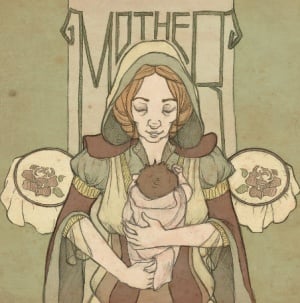 The Mother or the Mother Above, is one of the seven aspects of a single deity. Believers of the Faith of the Seven consider their god to be one with seven aspects, as the sept is a single building, with seven walls.[1]

See also: Images of the Mother

The Mother represents motherhood and nurturing. She is prayed to for fertility or compassion,[2] and is depicted as smiling with love, embodying the concept of mercy.[3] Like the other aspects of the Seven, there is an holy day dedicated to the Mother.[4]

It is also said that the Mother could be fiercer than the Warrior when her children were in danger.[1]

A passage in The Seven-Pointed Star says that the Maiden brought Hugor of the Hill a bride, so the Mother made her fertile.[5]

Weddings are conducted standing between the altars of the Father and the Mother.[6]

The senior member at motherhouses is refered to as "Mother".[7]

The Teats, a pair of grassy hills in the riverlands, were once named the Mother's Teats.[8]

The Mother is represented in the coat-of-arms of House Graceford of Holyhall.[9]

Tradional words recited during an adoubement include: "In the name of the Mother I charge you to defend the young and innocent".[10]

Gentle Mother, font of mercy,
save our sons from war, we pray,
stay the swords and stay the arrows,
let them know a better day.
Gentle Mother, strength of women,
help our daughters through this fray,
soothe the wrath and tame the fury,
teach us all a kinder way.

Queen Alysanne Targaryen remained devoted to the Mother all her life, even after the deaths of some of her children.[13]

King Baelor I Targaryen was found collapsed before the altar of the Mother after a fasting for forty one days.[14]

Ser Duncan the Tall considered meeting Egg as a sign from the Mother telling him to repay his debts to his late mentor, Ser Arlan of Pennytree, by taking in and trusting the boy the same way Ser Arlan did with him.[10]

Queen Aelinor Penrose was said to pray daily to the Mother to bless her with a child.[3]

Melisandre burns the wooden statues of the Seven from the sept at Dragonstone as a sacrifice to R'hllor. A longsword is thrust through the heart of the Mother's statue, and during the ceremony Stannis Baratheon pulls it free to reveal Lightbringer.[15]

Catelyn Stark prays in a nameless village's sept. The sept is modest and has no statues of the Seven, only rough charcoal drawings to represent them. A crack runs down through the Mother's left eye. It makes her look as if she were crying. Catelyn sees her own mother's face in the face of the Mother, as well as her sister Lysa and Cersei Lannister.[1]

Upon entering the sept of Maegor's Holdfast, on the eve of the Battle of the Blackwater, Sansa Stark sees that the Mother's altar is swimming in candlelight. Sansa visits each of the Seven in turn, lighting a candle at each altar, then sings the Mother's Hymn with the people in the sept.[11] She silently prays to the Mother for Sandor Clegane:

'He is no true knight but he saved me all the same. Save him if you can, and gentle the rage inside him.[11]

Sansa Stark sings the Mother's Hymn again that night to Sandor Clegane when he comes to her room.[12]

After being taken captive by the Brave Companions, Jaime Lannister and Brienne of Tarth are taken to Vargo Hoat who is sacking a small sept with some of his men. The sellswords have dragged the sept's carved wooden gods outside. Jaime sees Zollo sitting on the Mother's chest prying out her chalcedony eyes with the point of his knife.[16]

Samwell Tarly sings The Song of the Seven, which includes a verse for the Mother, as a lullabye to Gilly's son.[17]

Lancel Lannister tells Cersei Lannister that the High Septon told him that the Mother spared him for some holy purpose, so he might atone for his sins. Cersei wonders how he intends to atone for her.[18]

Ser Barristan Selmy prays to the Mother to show him mercy should he die in the upcoming battle.[19]

My lady, look down on this battle with a mother's eyes. They are all sons, every one. Spare them if you can, and spare my own sons as well. Watch over Robb and Bran and Rickon. Would that I were with them.[1]

The Mother gives the gift of life,
and watches over every wife.
Her gentle smile ends all strife,
and she loves her little children.[17]