From A Wiki of Ice and Fire
Jump to: navigation, search
"Mya" redirects here. For the bastard daughter of Aegon IV Targaryen, see Mya Rivers.

Mya Stone is a young woman serving House Royce of the Gates of the Moon. She is the eldest of King Robert I Baratheon's bastards.[2] Mya serves as a guide on the treacherous rocky climb from the Vale to the Eyrie, leading trains of mules, such as Whitey.[3] She also transports foodstuffs from the foot of the Giant's Lance to the Eyrie.[4]

Mya is a tall, strapping young woman, with coal-black hair cut short and deep blue eyes.[3] Her eyes are said to be her best feature. Mya is said to have a mirthful, lusty personality. She tends to dress in a masculine manner, eschewing dresses for leather. Catelyn Stark judged her to be seventeen or eighteen years old at the beginning of the series.[5]

Young Robert Baratheon, Lord of Storm's End, fathered Mya, his first child, on a commoner[2] while he and Eddard Stark were being fostered in the Vale of Arryn at the court of Jon Arryn, Lord of the Eyrie.[5] When Lyanna Stark, Ned's sister, heard of Mya's birth and parentage, she became less enthusiastic about her betrothal to Robert.[6] Robert often brought Ned along during his daily visits to see Mya, even after he lost interest in her mother.[5] Mya remained in the Vale at the Gates of the Moon[7] when Robert became king after Robert's Rebellion and took up residence in the Red Keep of King's Landing.[8]

At some point after the birth of Prince Joffrey Baratheon, Robert expressed interest in taking one of his baseborn daughters (apparently Mya) to court in King's Landing. Queen Cersei Lannister did not protest, but spitefully stated that "the city is not a healthy place for a growing girl", inferring that Cersei would harm her. Robert grew enraged enough to strike his wife, but did not press the point.[8]

Mya is somewhat openly known to be the bastard daughter of the king, although she was not acknowledged by her father. She has vague memories of him, as a big strong man tossing her in the air and catching her.[9] While Maddy knows the truth, it is unclear if Mya is aware that the king is her father.[9] 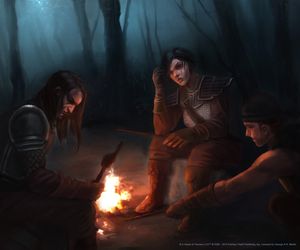 Having learned that Gendry is one of King Robert I Baratheon's bastards, Lord Eddard Stark recalls Mya from when he was fostered with Robert at the court of Lord Jon Arryn.[5]

After Catelyn Stark's arrival at the Gates of the Moon, she is ordered to ascend to the Eyrie by Lady Lysa Arryn. Mya assists Catelyn to Sky using mules, after which Lady Stark ascends to the Eyrie in a basket. Mya tells Cat that she is in love with a squire, Mychel Redfort, and hopes to marry him when he is made a knight. Cat believes this unlikely to happen, as Mya is baseborn and House Redfort descends from First Men nobility.[3]

Myranda Royce reveals to "Alayne Stone" that Mya lost her virginity to Mychel. Mya still hoped for marriage, till the newly-knighted Mychel was ordered by his father, Lord Horton Redfort, to marry Ysilla Royce, daughter of Lord Yohn Royce of Runestone.[9]

Mya catches the eye of the older Ser Lothor Brune.[9] Mya assists Alayne and Lord Robert Arryn when they descend from the Eyrie to the Gates of the Moon. She commands other mule handlers, including Carrot and Ossy.[9]

Mya informs young Robert that Lady Anya Waynwood's party has arrived at the Gates of the Moon for the tourney for the Brotherhood of Winged Knights. Alayne notices that Mya is unhappy with Mychel's presence at the castle, and also that the baseborn girl seems nervous around nobility.[11]

I promise you, my lady, no harm will come to you. It would be my honor to take you up. I've made the dark climb a hundred times. Mychel says my father must have been a goat.[3]

Mychel says I have the eyes of the owl.[3]

Men come and go. They lie, or die, or leave you. A mountain is not a man, though, and stone is a mountain's daughter. I trust my father, and I trust my mules. I won't fall.[9]

Mya's a clever girl, and if she vows she will bring you safely to the Lady Lysa, I believe her. She has not failed me yet.[3]

She could be pretty, if she would dress up like a girl.[9]

Alayne: Do you think Ser Lothor likes her as she is, in mail and leather? Or does he dream of her draped in silks and velvets?
Myranda: He's a man. He dreams of her naked.[9]