Myriah had the typical dark hair and eyes of House Martell. Those traits were passed on to her eldest son, Prince Baelor Targaryen.[5][1]

Myriah was the eldest daughter of the Prince of Dorne during the reign of King Daeron I Targaryen.[2] She had a younger brother, Prince Maron Martell.[1]

In 161 AC, after Daeron was killed during his attempted conquest of Dorne, King Baelor I Targaryen freed Dornish hostages in King's Landing and returned them to Dorne personally, walking barefoot. Once he reached Sunspear, Baelor spoke with the Prince of Dorne, and agreed upon a peace, which included the betrothal of Myriah to Baelor's cousin, Prince Daeron Targaryen. The two would marry once they were both of age.[2] 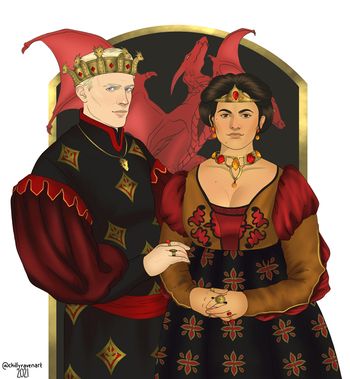 In 184 AC, after the death of King Aegon IV Targaryen, Daeron succeeded him as King Daeron II Targaryen, and Myriah became queen.[1]

In A Song of Ice and Fire, the character was originally named Myriah Martell.[7][8] However, when writing The World of Ice & Fire, George R. R. Martin changed her name to "Mariah".[2][6] But when writing Fire & Blood, George changed back to the original spelling, "Myriah".[9] The latest version of The World of Ice & Fire has been edited to change her name to "Myriah".[10]