Naerys had the Targaryen looks, a fine and delicate beauty, almost unworldy. She was slender and small, with big purple eyes and fine, pale, porcelain skin, near translucent.[1][6] She bore a certain resemblance to Daenerys Targaryen.[6]

Naerys dressed well, but simply, and seldom wore her crown or any other jewelry. Though she had the silver-gold hair of the Targaryens, she often bound it up beneath a hair net or concealed it beneath a cowl.[6]

Naerys was pious and gentle and frail.[7]

Naerys was the only daughter and youngest child of King Viserys II Targaryen and Larra Rogare.[1] According to semi-canon sources, she almost died in the cradle and was sickly for most of her life, finding most physical activity to be very taxing. She ate but little and was painfully thin, almost emaciated.[6]

Naerys loved music and poetry, played the harp well, and enjoyed sewing and embroidering. She was also devout in her faith, and often found solace in the pages of The Seven-Pointed Star.[6] She would have become a septa, had her father allowed it.[1]

Naerys loved Prince Aemon the most out of her two brothers, as he knew how to make her laugh. Aemon was also more like Naerys in character, while Prince Aegon was not. Yet, in 153 AC, Naerys was married to Aegon at their father's orders. The singers like to claim that both Aemon and Naerys wept during the ceremony, but the truth is different: Aemon is known to have quarreled with Aegon during the feast, and Naerys wept during the bedding, not the actual wedding.[1] Prince Aemon joined the Kingsguard soon after the wedding, at the age of seventeen.[3] 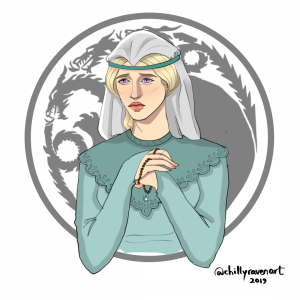 On the last day of 153 AC, Naerys gave birth for the first time, to a son named Daeron. His birth was difficult for Naerys, however, and Grand Maester Alford warned her that another pregnancy could kill her.[5] Naerys thus went to her husband, and asked him, as he now had an heir, if they could live as brother and sister, instead of husband and wife. Aegon refused.[5][6]

The marriage of Aegon and Naerys was an unhappy one. Aegon is known to have stated that he had loved nine women in his entire lifetime, yet Naerys was not counted as being among those.[5] While unhappy in her marriage, Naerys still had her brother Aemon and her son Daeron, who both knew how to make her smile.[6]

Throughout the years, Naerys went through several more difficult pregnancies, despite Alford's warning that another pregnancy could kill her. In 161 AC, Naerys nearly died giving birth to twins,[5] and the twins' deaths shortly after birth led King Baelor I Targaryen to fast for a moon's turn.[4] Baelor also sent Naerys's husband, Aegon, to Braavos on a diplomatic mission after this pregnancy. Accounts at the time suggest it was an excuse to make sure Aegon left Naerys alone as she recovered from the difficult childbirth.[5]

In 172 AC, Naerys gave birth to a second set of twins. The boy was stillborn, but the girl, Princess Daenerys, survived. Yet again, this delivery caused Naerys to linger near death, and Aegon's Hand of the King, Lord Bracken, went as far as to speak openly about marrying his own daughter Barba (who had given birth to the king's bastard Aegor Rivers a fortnight before Naerys had gone into labor) to Aegon, after Naerys's expected eventual death. However, Naerys eventually recovered, and the scandal caused Lord Bracken to be removed from his office.[5]

Naerys died in childbirth a year after Prince Aemon's death. The child, never mentioned again, most likely died as well.[5] 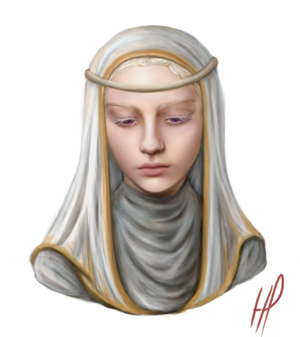 After Naerys's husband became King Aegon IV Targaryen, rumors that their son Daeron had not been fathered by Aegon, but by their brother, Prince Aemon the Dragonknight, started being spread. The truth of this claim has never been proven or disproven, though the singers claim Naerys loved Aemon, and Aemon loved her.[3] Aemon championed her and defended her honor against the slanders of Ser Morgil Hastwyck,[8] when he accused her of treason.[3]

The writings of Maester Kaeth in the Lives of Four Kings state that it was King Aegon IV who secretly started the rumors of Naerys's adultery, using Morgil to spread this tale, though the king denied this at the time. These accusations only started when Aegon and Daeron quarreled in 174 AC, when Daeron opposed his father's plan for an unprovoked war against Dorne.[5]

Prince Aemon once won a tourney as a mystery knight so he could name Naerys the queen of love and beauty, instead of said title going to one of Aegon's mistresses.[9]

Aemon eventually died defending Aegon from two men from House Toyne who attempted to murder him to avenge their brother, Ser Terrence Toyne of the Kingsguard. Naerys did not long survive Aemon's death, as she died in childbirth a year later. King Aegon, who had already slighted both Naerys and Aemon at every previous chance in the past, did little to honor either of his siblings' memories. Daring to go further now that the Dragonknight was dead, Aegon also began to make more references to Daeron's alleged parentage.[5]

As far as is known, there are only rumors about Daeron's parentage, with no one having questioned the paternity of Daenerys, the only other child of Naerys who lived past infancy.

Naerys: I have done my duty by you, and given you an heir. I beg you, let us live henceforth as brother and sister.
Aegon: That is what we are doing.[7]