Oldstones is the name given by smallfolk to a ruined castle in the northern riverlands. Once the seat of House Mudd, its original name has long been lost.[1]

The ruined stronghold sits on a hill above the Blue Fork of the Trident.[1] The overgrown and stony road slowly goes twice around the hill before reaching the summit.[2] Beneath the castle ruins, the lower slopes of the hill are thickly forested with ash, elms, oaks, pines, and sentinels. The landscape also contains blackberry, bracken, gorse, sedge, and thistle.[2]

Only the foundations remain among the weeds to show where the dismantled walls of Oldstones had once stood.[1] The curtain wall which once encircled the brow of the hill now consists of waist-high piles of crumbling stone spotted with lichen, and the ruins are extensive near the former gatehouse.[2] The only remnants of the keep are mossy hummocks, behind which is the godswood.[3]

A great carved sepulcher rests in the castle yard, half-hidden in waist-high brown grass among of ash trees. The weathered sepulcher entombs Tristifer IV Mudd, King of the Rivers and the Hills. The stone is cracked and crumbling at the corners and discolored by splotches of white lichen, while wild roses creep up over the king's feet almost to his chest.[1]

Near Oldstones is a bridge across the Blue Fork, older and smaller than the bridge downstream at Fairmarket.[1] 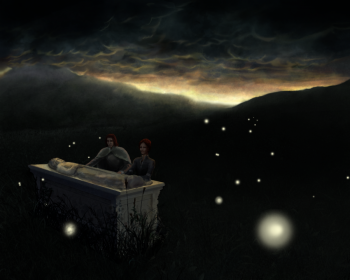 The castle now called Oldstones was the seat of House Mudd, who succeeded in unifying more of the riverlands than previous First Men dynasties. Tristifer IV Mudd, King of the Rivers and Hills, beheaded Roland II Arryn, King of Mountain and Vale, at Oldstones during the coming of the Andals. However, the Mudds were eventually overwhelmed by Andal warlords such as Armistead Vance, and their castle fell to ruin over the centuries.[1][4][5] Smallfolk made off with most of the stones to raise barns, holdfasts, and septs.[1]

During the occupation of the riverlands by the Storm Kings, Ser Lymond Fisher, the Knight of Oldstones, unsuccessfully claimed to be a river king.[4]

There is a song about Jenny of Oldstones.[6][1]

Hoster Tully, the Lord Paramount of the Trident, once camped at Oldstones with his daughter, Catelyn, and his ward, Petyr Baelish, while traveling to Seagard. Catelyn played at being Jenny, while Petyr pretended to be the Prince of Dragonflies.[1]

The rising waters of the Blue Fork wash away the bridge near Oldstones.[1] On the way to the Twins, Robb Stark, the King of the Trident, encamps upon the ruins of Oldstone atop the hill. recalling the fate of King Tristifer IV Mudd, Robb discusses with his mother, Catelyn Stark, whom he will name has his successor, as he and his queen, Jeyne Westerling, have not yet any children. Against his mother's wishes he plans to legitimize his half-brother, Jon Snow, and name him his heir.[1]

After the Red Wedding, during which Robb and Catelyn were betrayed by House Frey, the brotherhood without banners abducts Petyr Frey. Merrett Frey travels to the snowy ruins of Oldstones with the ransom for Petyr Pimple, the grandson of his half-brother Stevron. When Merrett enters Oldstones hears faint music coming drifting through the trees from somewhere deep within the castle. As he reaches the site of Tristifer's sepulchre, he finds Tom of Sevenstreams sitting cross-legged atop it, fingering the strings of his woodharp, along with other outlaws. Petyr is revealed to have already been hanged in the godswood. A revived Catelyn allows the outlaws to surround Merrett, take his gold, and hang him for his own involvement in the Red Wedding.[2]

The murderers of Merrett flee Oldstones, with one band escaping Lord Lucias Vypren at Fairmarket.[7] 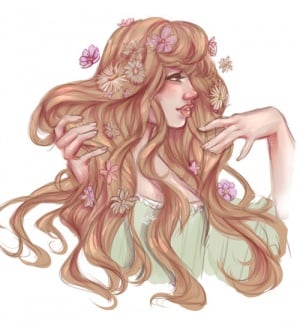 Jenny of Oldstones by Rae Lavergne

Robb: Does this castle have a name?
Catelyn: Oldstones, all the smallfolk called it when I was a girl, but no doubt it had some other name when it was still a hall of kings.[1]

High in the halls of the kings who are gone, Jenny would dance with her ghosts ...[2]

Chapters that take place at Oldstones