Orys Baratheon, also known as Orys One-Hand, was the founder of House Baratheon and was the first Lord of Storm's End after House Durrandon.[6][7] During the Wars of Conquest, he slew the last Storm King, Argilac the Arrogant, married his daughter Argella, and became the first Lord Paramount of the Stormlands. Orys is also considered the first Hand of the King, serving Aegon the Conqueror.[8]

Famed for his prowess at arms, he was believed to be the bastard brother of Aegon I. Although these rumors were never proven, maesters and members of House Targaryen insist on their authenticity. He distinguished himself fighting for the Targaryens during Aegon's Conquest, the First Dornish War, and the Vulture Hunt.[2]

Known for his prowess in battle and his strong loyalty to King Aegon I and House Targaryen,[2] Orys was described as a fierce warrior.[3][8] After the loss of his hand in the First Dornish War, he became crabbed and bitter, turning his attention to Dorne and obsessed with the idea of revenge.[2]

Orys was the rumored bastard half-brother of Aegon I Targaryen by their father Aerion, Lord of Dragonstone. Orys was one of Aegon's fiercest commanders, and was regarded as Aegon's only true friend and champion of his youth.[8]

Aegon I's grandson Jaehaerys I Targaryen considered it an open secret that Orys was Aerion's bastard son, a dragonseed of House Targaryen. Nonetheless, even Jaehaerys knew absolutely nothing about Orys's mother or the circumstances of his birth, not even rumors - such as whether Orys was conceived as a product of first night or just a youthful dalliance by Aerion.[10][11] When King Argilac Durrandon offered Aegon his daughter Argella in marriage and some lands as her dowry, the Lord of Dragonstone spurned the Storm King's proposal. Instead, he requested significantly more land and offered to seal the pact by wedding Orys to Argilac's daughter. The Storm King angrily rejected these terms, for Argilac the Arrogant believed that Orys was a bastard and that such a match would dishonor his daughter.[3][8]

When Aegon's Conquest's had begun, Orys had command on the ground during the first battle, defeating Lords Mooton and Darklyn. After Aegon's coronation at Aegonfort, Orys was raised to Hand of the King. Within days of the coronation, Orys and Queen Rhaenys Targaryen, with her dragon Meraxes, were then tasked with capturing Storm's End, taking the greater part of Aegon's host with them. While King Argilac gathered his banners, Lords Fell, Buckler, and Errol ambushed the advance elements of Orys's host, until they were forced to retreat when Meraxes burned the surrounding woods. Argilac the Arrogant, hearing of the burning of Harrenhal, knew his formidable walls would not protect him from dragonfire. Argilac rode out with his great host to give open battle.[3][8]

Orys was made aware of Argilac's march by Rhaenys, who provided him with the Storm King's numbers and dispositions, for she had spotted the host with her dragon. Baratheon took up a strong position on the hills south of Bronzegate, digging in on the high ground while he awaited the stormlanders. Argilac's host was twice the size of Orys's, and when the battle called the Last Storm begun, the stormlanders managed to break through the Baratheon center, only to be engulfed by dragonflame. With Meraxes and Rhaenys turning the battle into chaos, Orys descended down the hill, where he encountered the Storm King. Ordering his own men to stand aside, he gave Argilac a chance to yield. Instead, Argilac cursed Orys and they fought instead. Though he took a wound, Orys slew Argilac the Arrogant, ending the reign of the Storm Kings. The loss of their king made the stormlanders loss heart, who surrendered or fled.[3][8]

After the battle, Argella Durrandon, the daughter of Argilac, declared herself the Storm Queen and continued to hold Storm's End until her household turned against her to avoid the same fate of Harrenhal. They delivered her to Orys, naked and chained. Orys, however, covered her with his cloak and treated her chivalrously. Aegon rewarded Orys with the lands and incomes of Storm's End and named him Lord Paramount of the Stormlands. None dared suggest that he was unworthy of these honors.[2] Orys took Argella as his wife and to honor Argliac's valor, he adopted the stag banner, honors and words of the Durrandons, "Ours is the Fury", forming House Baratheon.[8] 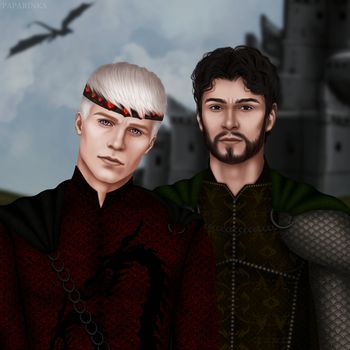 King Aegon I Targaryen and his Hand Orys Baratheon, by © Paparinka Art

Orys later joined King Aegon I in the First Dornish War in 4 AC, leading an assault on the Boneway with one thousand picked knights. His horses struggled up the stony, narrow, and twisty paths, while his knights were hit with boulders from above, the work of defenders the stormlanders never saw. Where the Boneway crossed the river Wyl,[1] the cunning Dornishmen launched a night raid, raining arrows, rocks, and spears from above[12] as the stormlanders crossed a bridge. The bodies of the invading army blocked the Boneway from both ends, and when Lord Orys ordered his men to fall back, a triggered rockfall cut off their retreat. With no way forward or back, the stormlanders were massacred, save for Orys and a dozen other lords thought worth the ransom. However, Orys and his bannermen found themselves the captives of the Wyl of Wyl, the savage mountain lord called the Widow-lover.[1]

When Aegon eventually agreed to the Dornish ransom demands, Lord Baratheon and his bannermen were ransomed in 7 AC for each man's weight in gold. However, they were freed only after having their sword hands chopped off so they would not be able to use them again against Dorne. Orys became known as Orys One-Hand thereafter.[12] In retaliation for this treachery, King Aegon descended on the mountain fastnesses of House Wyl with his dragon Balerion and burned them to rubble, though the Wyls managed to take refuge in their caves and tunnels beneath the mountains.[1]

Orys was said to have become crabbed and bitter after that, so he resigned his office as Hand and returned to the stormlands. He became obsessed with vengeance against the Dornish, especially House Wyl, whose lord had removed his hand.[9] When Princess Deria Martell came to King's Landing to provide peace terms, Lord Orys argued for sending the princess back to her father Nymor, the Prince of Dorne, without a hand.[1]

Orys received his opportunity for vengeance against the Wyls in the Second Dornish War, during the early reign of Aegon's son, King Aenys I Targaryen. In 37 AC, a Dornish outlaw known as the Vulture King led a huge army to reave the lands north of the Red Mountains, attacking Blackhaven and Nightsong. The Vulture King split his host, having one half led by Lord Walter Wyl to besiege Stonehelm, the seat of House Swann. The Lord of Storm's End, eager for revenge against the Dornish, led his forces from Storm's End one last time to participate in the Vulture Hunt.[5][13]

While Wyl's host sat besieging Stonehelm, Orys's forces crushed the Dornishmen beneath the walls of the castle.[5] Lord Walter Wyl, the son of the Widow-lover, was brought to Orys, wounded but alive. Lord Baratheon chopped off Walter's sword hand, then his other hand, followed by both feet, which he called his "usury". On his trip home to Storm's End, Orys died of the wounds he had taken in the battle. Orys died content, according to his son Davos, smiling at the rotten hands and feet dangling in his tent.[2][5]

The King's Hand should have a hand. I will not have men speaking of the King's Stump.[1]

—Orys, resigning from office as Hand

Your father took my hand. I claim yours as repayment.[5]

My shield, my stalwart, my strong right hand.[8]

Orys Baratheon's parentage was never proven, though he was widely believed to be a bastard of Aerion Targaryen, the Lord of Dragonstone. As such, he would have been the half-brother of Aegon I Targaryen and his sisters, Visenya and Rhaenys. The favor Aegon showered upon Orys gave credence to these rumors.[2][3] During the Wars of Conquest, Orys took Princess Argella Durrandon, the only heir of King Argilac the Arrogant and the last of House Durrandon, as his wife, forming House Baratheon. Orys had at least two children, Davos and Ser Raymont Baratheon.[2]