Ser Osmund Kettleblack is a member of House Kettleblack who claims to be a hedge knight.[4] He is the son of Oswell Kettleblack and he has two brothers, Osfryd and Osney. In A Storm of Swords, he is twice mistakenly called Oswald Kettleblack.[1][2]

Osmund stands six feet and six inches, most of it muscle. He has a hook nose, bushy eyebrows, and a spade-shaped beard[5] described as brown[5] and black.[6] Osmund has narrow cheeks[7] and broad shoulders.[6] His chest is covered with black hair.[7] Osmund thinks that he and Osfryd are stronger than Osney.[8] Like his two brothers, Osmund is illiterate.[9]

Osmund and his brothers are amiable, being popular with both knights and servants and amorous with serving women.[10] Tyrion Lannister considers all three to be deceitful and unsavory,[4] but none as dangerous as Bronn.[11] Ser Jaime Lannister thinks of Osmund as a dolt[6] and less skilled than Ser Loras Tyrell.[12]

Osmund is among Cersei's escort when she visits the Great Sept of Baelor to visit the High Sparrow.[13]

Ser Osmund served in the Stepstones and the Disputed Lands with the Gallant Men fighting for Lys and then Tyrosh. He claims to have been knighted on a battlefield by Ser Robert Stone, who is now dead.[1]

In order to match her brother Tyrion's personal power base of sellswords, Queen Cersei Lannister calls on the High Septon at the Great Sept of Baelor as cover for secret meetings with the Kettleblack brothers, who are supposed to hire other sellswords for her. Unbeknownst to Cersei, however, the Kettlebacks are already being paid by Bronn, Tyrion's captain.[4][14] Ser Osmund sell Cersei's secrets and provides Bronn with information about Cersei's moves.[4]

Osmund is named to the Kingsguard by Cersei when Ser Boros Blount is stripped of his white cloak for cowardice on the Rosby road. Tyrion thinks the appointment gives him another agent close to King Joffrey I Baratheon.[5] Osmund eventually takes the position next to Joffrey that used to be reserved for Sandor Clegane.[10]

Osmund and his brothers become great favorites in the Red Keep, getting along with both servants and highborns with their easygoing manner and their humor. It is rumored that they get best along with the serving wenches, although Osmund's position in the Kingsguard implies celibacy.[10]

Osmund and Ser Meryn Trant guard King Joffrey during the Battle of the Blackwater.[15] When Joffrey goes off to catapult the Antler Men into the Blackwater Rush, Tyrion warns Osmund to keep the king safe and in the city.[16] When Osney tells Cersei that the Mud Gate has come under attack by a ram, however, she issues an order for Osmund to bring the king from the city back to the Red Keep. When Osney points out Tyrion's diametrically opposite orders, Cersei threatens that she will send the Kettleblacks into the middle of the battle if they do not do as told.[10] The flight of the king from the battlefield provokes some members of the City Watch to mutiny.[17] Osmund later conveys the news to Osney that the defenders have been saved by the combined forces of the Lannisters and the Tyrells.[17]

After the battle, Osmund and the other remaining members of the Kingsguard spend hours knighting more than six hundred men.[18] While later standing guard, he leers at Sansa Stark when she visits the Red Keep's godswood.[18] While recuperating from wounds suffered at the Blackwater, Tyrion regrets having trusted Osmund.[19] 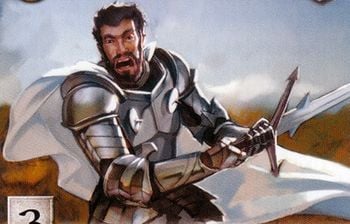 Osmund's brothers, Osney and Osfryd, receive their knighthoods after the Battle of the Blackwater.[20] Cersei has the Kettleblacks retrieve Prince Tommen Baratheon from Rosby.[20] Varys informs Tyrion that Cersei has been flirtatious toward Osmund.[21]

Ser Osmund is one of the Kingsguard assigned to bring Sansa to the royal sept for her marriage to Tyrion Lannister. While Meryn's mere look promises violence, Osmund speaks to Sansa kindly and convinces her to come along quietly. During the feast,Osmund laughs when Tyrion mocks King Joffrey.[22]

When Joffrey chokes at his own wedding feast, Osmund rips open the king's collar in an attempt to save the boy king.[23]

Osmund stands guard outside the royal sept when Cersei is within with Joffrey's corpses. He does not recognize Ser Jaime Lannister when Cersei's disheveled brother arrives, and Osmund is forced to apologize to the Lord Commander of the Kingsguard after disrespecting him.[6]

Osmund is called as a witness for the prosecution during the trial of Tyrion for the death of King Joffrey, but his testimony is made up.[11] Osmund is amiable toward Jaime when the Kingsguard meet in White Sword Tower. Osmund jokingly accuses the new High Septon of Joffrey's murder, and he laughs when Boros is appointed the food taster for King Tommen I Baratheon. Jaime is skeptical of Osmund's backstory.[1] Osmund brings Ser Gregor Clegane his shield when the Mountain duels Prince Oberyn Martell in Tyrion's trial by combat.[2]

Petyr Baelish reveals to Sansa that the Kettleblacks have been in his employ all along, unbeknownst to Cersei and Tyrion, although he thinks Osmund has become unreliable.[14]

When Jaime helps Tyrion escape from the black cells, Tyrion learns from Jaime that his first wife, Tysha, had not been a whore as claimed by their father, Lord Tywin Lannister, but was as she had said: an innocent, orphaned crofter's daughter. In his fury, one of the things that Tyrion tells Jaime is that Cersei has been having sex with Osmund, Ser Lancel Lannister, and probably Moon Boy. Tyrion murders Tywin, the Hand of the King, before disappearing from the Red Keep.[24]

Ser Osmund and Ser Boros Blount bring the news to Cersei that Tywin is dead. Cersei has Osmund escort her to the Tower of the Hand. Osmund and his brothers are ordered by the Queen Regent to dispose of the corpse of Shae.[25] Boros and the Kettleblacks also kill two sleeping gaolers for Cersei, which upsets Jaime.[7]

Osmund guards one of the doors of the Small Hall for the feast after King Tommen weds Margaery Tyrell. Afterward, Cersei has Osmund guard her while she has the Tower of the Hand destroyed with wildfire.[26]

In order to ruin Margaery, Cersei plots for the young queen to be found in bed with Osney by Osmund.[27] Osney is unable to seduce Margaery, however.[28]

Tyrion's claim that Cersei has been sleeping with Osmund bothers Jaime.[29] Cersei wants Osmund to command the Kingsguard when Jaime departs for the siege of Riverrun, but the Lord Commander insists that Ser Loras Tyrell have command instead.[29] Jaime considers gelding Osmund and sending him to the Wall.[30]

Osmund supports Cersei when she interrogates Grand Maester Pycelle,[31] and the Queen Regent has Osmund say out of sight for when his brother Osney's accusation of adultery against Margaery is made public.[9] Cersei and Osney both end up imprisoned by the Faith of the Seven as well, however.[9]

Osmund and Osfryd are thrown into a dungeon[32] by Ser Kevan Lannister when Cersei falsely[33] admits to bedding all three of the Kettleblack brothers.[34] The Lord Regent plans to send them to the Wall, if they plead guilty. If they plead not guilty, they will face Ser Robert Strong in trial by combat.[32]

Do as you're told, sweetling, it won't be so bad. Wolves are supposed to be brave, aren't they?[22]

Osmund: It was the day they gave me the white cloak, my lords. That brave boy said to me, 'Good Ser Osmund, guard me well, for my uncle loves me not. He means to be king in my place.'
Tyrion: Liar![11]

Jaime: Ser Osmund. I do not know you. I find that curious. I've fought in tourneys, mêlées, and battles throughout the Seven Kingdoms. I know of every hedge knight, freerider, and upjumped squire of any skill who has ever presumed to break a lance in the lists. So how is it that I have never heard of you, Ser Osmund?
Osmund: That I couldn't say, my lord. I'm a soldier, though, not no tourney knight.[1]

His sister had insisted that Joffrey strip Blount of his white cloak on the grounds of treason and cowardice. And now she replaces him with another man just as hollow.[5]

Varys: And the eldest, Ser Osmund of the Kingsguard, dreams of certain other ... favors ... as well. You can match the queen coin for coin, I have no doubt, but she has a second purse that is quite inexhaustible.


Tyrion: Are you suggesting that Cersei's fucking Osmund Kettleblack?


Varys: Oh, dear me, no, that would be dreadfully dangerous, don't you think? No, the queen only hints ... perhaps on the morrow, or when the wedding's done ... and then a smile, a whisper, a ribald jest ... a breast brushing lightly against his sleeve as they pass ... and yet it seems to serve. But what would a eunuch know of such things?[21]
—Varys and Tyrion Lannister

What was Cersei thinking when she gave this one a white cloak?[1]

Osmund has become especially unreliable since he joined the Kingsguard. That white cloak does things to a man, I find. Even a man like him.[14]

As fond as she was of Osmund, at times he seemed as slow as Robert. I hope his sword is quicker than his wits. The day may come that Tommen has some need of it.[28]