A palanquin is a litter, a class of wheel-less vehicle for the transport of persons. It can be carried by people[1] or by animals like oxen.[2]

The Prince of Pentos rides about the city in a palanquin of ivory and gold. Three heralds go before him.[3]

Those who dwell in Asshai often ride in palanquins of ebony and iron, hidden behind dark curtains and carried upon the backs of slaves.[4]

In Volantis it is said that travelling afoot can taint visitors in the eyes of foreign captains and the Volantenes alike, therefore persons of quality travel by palanquin, or in the back of a hathay.[5]

The people of Meereen seldom ride within their city walls, preferring instead palanquins, litters, and sedan chairs borne upon the shoulders of their slaves. The Meereenese believe that horses befoul their streets, but slaves do not.[6]

Palanquins are uncommon in the poorer neighborhoods of Qarth.[7]

According to legend, the God-on-Earth traveled in a palanquin carved from a single pearl and carried by his hundred wives.[8]

Septon Alfyn was carried in a litter because of his missing legs while he toured the realm spreading the Doctrine of Exceptionalism.[9]

Rego Draz, a native of Pentos, was resented for flaunting his wealth by riding in a gilded palanquin in King's Landing.[10] In 59 AC, Rego was murdered after his palanquin was overwhelmed in Flea Bottom.[11]

Daenerys Targaryen, her brother Viserys, and Magister Illyrio Mopatis travel in Illyrio's elaborately carved palanquin on the way to present Daenerys to her prospective husband, Khal Drogo. The streets of Pentos are pitch-dark when they set out so servants go ahead to light the way, carrying ornate oil lanterns with panes of pale blue glass, while a dozen strong men hoist the poles on their shoulders.[1]

While in Vaes Dothrak, a pregnant Daenerys opts to be carried in a litter to visit the Western Market. If Drogo were accompanying her she would have ridden her silver not wanting to appear weak in his eyes. With her husband off hunting, however, Daenerys finds it pleasant to lie back on soft cushions and be carried with red silk curtains to shield her from the sun.[12] 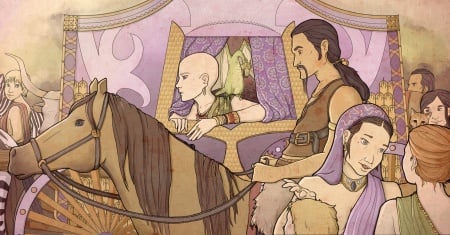 Daenerys Targaryen in Qarth travelling by palanquin, by Mustamirri ©

Xaro Xhoan Daxos gives Daenerys a palanquin of ebony and gold with a matched set of bullocks to bear it.[2] After being refused by the Pureborn of Qarth, Daenerys rides with Rhaegal and Xaro as Jhogo clears a path. The drapes keep out the dust and heat of the streets.[2] Daenerys rides in her palanquin to visit the House of the Undying.[13]

Daenerys chooses to ride the silver for her visit to port of Qarth. She rejects going by palanquin, feeling she had reclined too long on its satin cushions. [7]

At the kingsmoot, Erik Ironmaker is carried on a palanquin by three of his grandsons.[14]

Yurkhaz zo Yunzak of Yunkai comes and goes in a palanquin so huge it requires forty slaves to carry it.[15]

Tyrion Lannister is smuggled out of Pentos inside the litter of Illyrio Mopatis, and they travel in it on their way to the Rhoyne. The palanquin[16] is suspended between eight draft horses on heavy leather straps. Four Unsullied pace beside the horses. Inside it is pleasantly warm, despite the autumn chill.[5]

A matron on an antique palanquin bids on Tyrion and Penny when they are up for sale on the slave auction block outside of Meereen.[17]

Reznak mo Reznak orders that Daenerys's palanquin be made ready for her wedding procession in Meereen, but she instead chooses a sedan chair.[6] Daenerys and her new husband, Hizdahr zo Loraq, ride on two thrones side by side in an ornate open palanquin, surrounded by Brazen Beasts, on their way to the reopening of Daznak's Pit.[18] After Daenerys disappears from Meereen atop Drogon, a woman complains to Reznak about damage to her palanquin.[19]

Dany had freed the slaves, yet palanquins, litters, and sedan chairs still choked the streets as before, and none of them floated magically through the air.[6]