From A Wiki of Ice and Fire
Jump to: navigation, search
Not to be confused with Renly's peach. 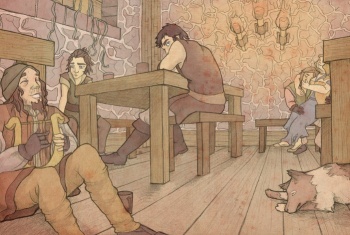 Tom Sevenstrings, Arya Stark, and Gendry at the Peach - by mustamirri ©

The Peach is an inn and brothel located at the eastern side of Stoney Sept's main market square. It has white-washed walls, and its sign is a wooden shingle painted like a peach with a bite taken out of it. The inn is run by Tansy, while Alyce, Bella, Cass, Helly, Jyzene, and Lanna work there as prostitutes or "peaches".[1] Next to the inn are stables.[2]

During Robert's Rebellion, Lord Robert Baratheon hid at the Peach before the Battle of the Bells. According to Leslyn, Robert laid with all of the inn's prostitutes but his favorite was Bella's mother.[2] An alleged son of Tom of Sevenstreams also resides at the inn.[2]

The Peach is damaged when Stoney Sept is attacked during the War of the Five Kings. When Arya Stark and Gendry arrive in the town with a group of the brotherhood without banners, however, they see that half of the inn's roof has been patched over. After the visitors are bathed, Tom of Sevenstreams performs in the common room, singing "Six Maids in a Pool", "The Maids that Bloom in Spring", and "Two Hearts That Beat as One".[2]

Bella flirts with Gendry and Jack-Be-Lucky, and she reveals that she does not charge friends of Thoros of Myr and Beric Dondarrion. Greenbeard flirts with two girls, while Anguy and Lem disappear into private rooms with their own women. Later, Tansy reveals to Lem and Harwin of the release of Ser Jaime Lannister from captivity at Riverrun by Catelyn Stark and Brienne of Tarth, which Arya disbelieves. An old man propositions young Arya, but Gendry sends him away by protecting his "sister".

Arya and her companions sleep on a large mattress under eaves at the top of the stairs. The next morning, they awake to find the Mad Huntsman has returned to Stoney Sept with Sandor Clegane in custody.[2][3]

Arya: I bet this is a brothel.


Gendry: You don't even know what a brothel is.

Across the square the dead men were rotting in their crow cages, but inside the Peach everyone was jolly. Except it seemed to her that some of them were laughing too hard, somehow.[2]