Polliver is a man-at-arms among the Mountain's men in service to Ser Gregor Clegane. In the television adaptation Game of Thrones he is portrayed by Andy Kellegher. 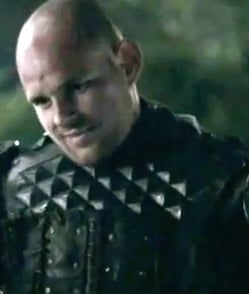 Andy Kellegher as Polliver in Game of Thrones

Polliver is near as tall as Sandor Clegane, but not as heavily muscled.[2] He has a thick, black, spade-shaped beard that is neatly trimmed, covering his jaws and jowls. His head is more bald than not.[3]

Polliver is a grim and methodical fighter,[2] but Arya Stark does not believe him to be as evil as his more violent comrades in the Mountain's men.[3]

Polliver serves with Ser Gregor Clegane in the riverlands and is among the Mountain's men who capture Arya Stark, Gendry and Hot Pie near the Gods Eye. He takes Needle from Arya.[3] For this, Arya adds him to her prayer kill list.[3]

Polliver later departs Harrenhal alongside Lord Tywin Lannister as part of Gregor's vanguard, unknowingly putting himself out of Arya's reach to choose him as her next target for Jaqen H'ghar.[4] He is the standard bearer of Gregor and is seen wearing Gendry's bull helm when leaving, supposedly having taken it from Dunsen.[4]

Polliver participates in the Battle of the Fords under Gregor's command, managing to cross the Red Fork as one of his best men. He survives the battle at Stone Mill and successfully retreats when Ser Edmure Tully counter-attacks with his reserve.[5]

Polliver's atrocities are recalled by Arya, who informs Harwin and the brotherhood without banners.[6] He continues to be included in Arya's list, though as time goes on she struggles to remember his face as well as the other marked members of Gregor's men-at-arms.[7]

After the capture of Harrenhal, Polliver, the Tickler and a Sarsfield squire go whoring at the inn at the crossroads, where they encounter Sandor Clegane and Arya.[2] A fight ensues after Sandor refuses to accompany Polliver to Harrenhal and the three Mountain's men are killed, with Polliver being slain by Sandor. Arya retrieves Needle from his corpse.[2]

Ser Jaime Lannister discovers that Gregor had named Polliver as Harrenhal's castellan after his departure, but Polliver was killed by Sandor, leaving no one in charge at the castle.[1]