Priest of the Drowned God Priests of the Drowned God are the religious leaders for the ironborn from the Iron Islands. The priests worship the Drowned God and oppose his rival, the Storm God. Followers of their religion are symbolically drowned by having salt water poured over their heads by priests or having their head placed in water.[1][2] Some priests, such as Aeron Greyjoy, believe that true believers must actually be drowned and then revived with the kiss of life.[2] Aeron's acolytes are known as drowned men.[2][3]

Most priests wander the Iron Islands barefoot and poorly clad in seawater robes.[1] Theirs is an oral tradition, so most cannot read. Lords and smallfolk are obliged to give them shelter, and some priests only eat fish. Most only bathe in the sea.[4] Priests sometimes drink a mouthful of salt water to strength their faith.[5]

Priests perform the ceremony when a man weds a rock wife or a salt wife.[4] Priests of old called kingsmoots[6] and carried burning brands.[1] They are more supportive of the Old Way and paying the iron price.[7][8] 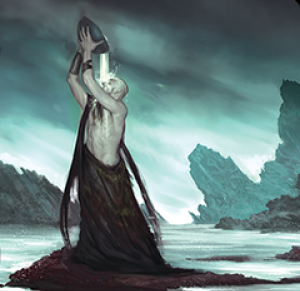 While maesters believe the ironborn descend from the First Men, the Drowned God's priests claim their people came from the sea.[4] Priests proudly tell stories of the Grey King and ancient reavers from the Age of Heroes.[4] The greatest priest was Galon Whitestaff, who called for a kingsmoot to name Urras Greyiron as High King of the Iron Islands.[6]

Priests denounced Urrathon IV Goodbrother for claiming the crown while Torgon Greyiron was away.[3] Urron Greyiron killed half a hundred priests and prophets at the kingsmoot in which he established House Greyiron as hereditary Kings of the Iron Islands.[6] Priests ardently opposed House Hoare for wedding Andals and supporting the Faith of the Seven, claiming the Hoares had "black blood".[7] King Horgan Hoare slaughtered priests after they attacked followers of the Seven.[7] The Shrike led a rebellion against King Harmund III Hoare.[7]

During Aegon's Conquest, King Harren Hoare was killed in the burning of Harrenhal. Twoscore priests crowned Lodos at Old Wyk, and the would-be king called for krakens to destroy the ships of King Aegon I Targaryen. When none of the beasts appeared, a stone-laden Lodos walked into the sea with thousands of followers to see his supposed father, the Drowned God.[9]

Priests were angered by Lord Vickon Greyjoy allowing the Faith of the Seven to return to the Iron Islands.[9] After Lord Goren Greyjoy slew Lodos the Twice-Drowned in 37 AC, King Aenys I Targaryen allowed the septons to be expelled from the islands.[10]

Maester Cerrick studied the beliefs and customs of the priests.[11]

Aeron Greyjoy became a priest after his ship went down in a storm.[1]

After Aeron Greyjoy calls for a kingsmoot on Old Wyk after the death of his brother Balon, King of the Isles and the North,[2] his effort is supported by other priests throughout the Iron Islands.[12]

Aeron Damphair attempts to rouse the islands against his brother, King Euron Crow's Eye, after Euron's selection at Old Wyk.[13]

Erik Ironmaker hunts down drowned men and priests during the search for the vanished Damphair.[3]

Men from other lands often think them mad, and so they may appear, but it cannot be denied that they wield great power.[4]

We are born to suffer, that our sufferings might make us strong.[2]