Pylos is a maester of the Citadel, newly sent to serve Stannis Baratheon at Dragonstone. He is to be the eventual replacement for Maester Cressen.[2]

No more than twenty-five years old, Pylos is very solemn and polite.[2] He is clever and diligent and well-meaning,[3] as well as kind[3] and courageous,[4] and can see a man's worth is more than his birth.[3]

When Maester Cressen became ill in 298 AC, Pylos was sent by the Citadel to Dragonstone. It was said that he was to be Cressen's assistant, but Cressen was aware that Pylos was to be his replacement when he dies.[2] 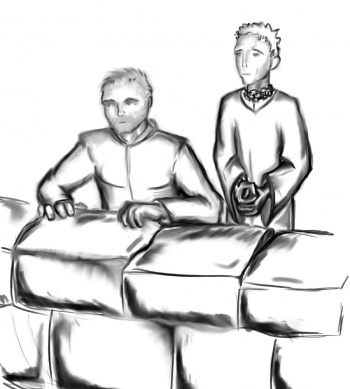 Pylos serves on Dragonstone as an assistant maester, helping Maester Cressen, who is too old and frail to perform all his duties. Pylos shows the white raven (sent from the Citadel to announce the end of summer) to Princess Shireen Baratheon. Cressen is distraught when he arrives late to Stannis's feast to find that Pylos is in his place at the table.[2]

After Cressen's death, Pylos becomes Dragonstone's official maester. He helps prepare Stannis Baratheon's letter to all the lords of Westeros, which proclaims him the true king and asserts that Ser Jaime Lannister, not Robert I Baratheon, is the father of Cersei Lannister's children (and thus that Joffrey Baratheon is a bastard born of incest and illegitimately sitting the throne).[5]

When Ser Davos Seaworth is imprisoned in Dragonstone's dungeons, he takes ill and Maester Pylos treats him.[6] Pylos also treats the sick Edric Storm (bastard son of Robert Baratheon), leeching him; these blood-filled leeches are used by Melisandre in her ritual to curse the false kings, Joffrey Baratheon, Balon Greyjoy, and Robb Stark.[7]

Maester Pylos educates the children on Dragonstone, Princess Shireen Baratheon, Edric Storm, and Devan Seaworth. After Davos Seaworth is raised to the position of Stannis's Hand of the King, he seeks out Maester Pylos for guidance, and to be taught how to read and write. During this process, Pylos shows Davos a letter from Maester Aemon of the Night's Watch, begging for assistance from the five kings against the wildling forces of Mance Rayder and the oncoming threat of the Others. Pylos tells Davos that Stannis had not yet seen the letter, as his previous Hand Alester Florent had deemed it not worth his attention or resources.[3]

Pylos is made aware of Davos's plan to remove Edric Storm from Dragonstone to keep him safe from Melisandre's scheme to sacrifice him, and chooses to cooperate with it. Pylos becomes an essential part of the plan, as Edric is taken to a ship to the Free Cities during his lessons with the maester, and he also encourages the boy to follow Davos's orders. Davos thinks how he had been unsure of Pylos, perhaps because of resentment over Cressen's death; but now he can only admire the maester's courage, since if Stannis judges the plan as treason, Pylos could also be executed.[4]

Though Stannis and his army have left for the Wall, Pylos remains at Dragonstone as part of its garrison.[8] He is likely present during the siege of Dragonstone by the Redwyne fleet and the successful assault by Ser Loras Tyrell, who is gravely wounded while taking the castle.[9]

Davos recalls that Maester Pylos had taught him how to read.[10][11]

Davos Seaworth: The King's Hand should be a highborn lord, someone wise and learned, a battle commander or a great knight...
Pylos: Ser Ryam Redwyne was the greatest knight of his day, and one of the worst Hands ever to serve a king. Septon Murmison's prayers worked miracles, but as Hand he soon had the whole realm praying for his death. Lord Butterwell was renowned for wit, Myles Smallwood for courage, Ser Otto Hightower for learning, yet they failed as Hands, every one. As for birth, the dragonkings oft chose Hands from amongst their own blood, with results as various as Baelor Breakspear and Maegor the Cruel. Against this, you have Septon Barth, the blacksmith's son the Old King plucked from the Red Keep's library, who gave the realm forty years of peace and plenty. Read your history, Lord Davos, and you will see that your doubts are groundless.[3]

Any man can read, my lord. There is no magic needed, nor high birth.[3]

Davos had been uncertain of Pylos. Perhaps he resented him for taking old Cressen's place. But now he could only admire the man's courage. This could mean his life as well.[3]

—Davos Seaworth's thoughts on Pylos when he comes for Edric Storm