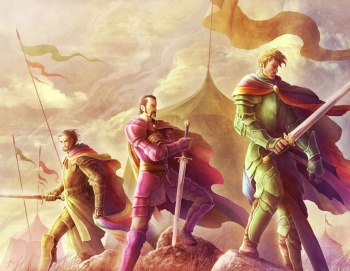 The Rainbow Guard, also called the rainbow knights,[2] is an organization created by Renly Baratheon to serve as his equivalent of the Kingsguard. Its members wear rainbow-striped silk cloaks,[1] although they use their own sigils on their shields and garb.[1][3] The rainbow connects the organization to the Faith of the Seven,[4] for which the rainbow is a religious symbol.[5] Each member of the Rainbow Guard wears armor of a single different color, with the group of seven together representing the seven-colored rainbow.[2] Unlike the Kingsguard, the Rainbow Guard appears to have no restriction on its members holding hereditary lands, with one lord being a member of the Rainbow Guard.[6]

At the start of the War of the Five Kings in 298 AC, Renly Baratheon declares himself Lord of the Seven Kingdoms after the death of his brother, King Robert. To reflect his status, King Renly creates the Rainbow Guard, his own version of the Kingsguard. Ser Loras Tyrell, Renly's lover, is the first appointee and Lord Commander. Except for the Lord Commander, each of the members are given a color of the rainbow.[2]

The last position is held open, in the hope of awarding it to Ser Barristan Selmy, should he join Renly's cause. Barristan the Bold never arrives in Renly's camp, however, and the cloak is granted to Brienne of Tarth, who is awarded the position after winning the great melee at Bitterbridge involving over a hundred knights, including Loras.[1]

Following the death of Renly at Storm's End in 299 AC,[3] the Rainbow Guard disintegrates, with Loras Tyrell joining his family in declaring for King Joffrey Baratheon, two killed by Loras, three switching allegiance to King Stannis Baratheon, and one fleeing and becoming the sworn sword of Lady Catelyn Stark. 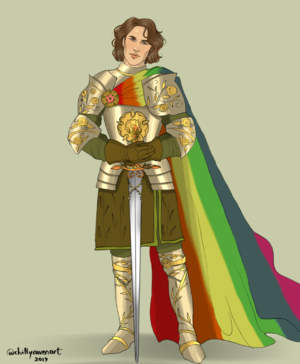 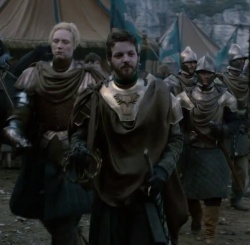 Renly's guards in Game of Thrones

Worldwide, the LGBT rights political movement has adopted the rainbow as its symbol.[15] However, author George R. R. Martin did not intend the books' use of "Rainbow Guard" to refer to Renly's homosexuality.[4] Despite the explicit depiction of the relationship between Renly Baratheon and Ser Loras Tyrell in the television adaptation Game of Thrones, HBO elected not to use the term "Rainbow Guard" due to the political connotations. The organization is instead described in the show as "King Renly's Kingsguard" and wear the colors of Renly's Baratheon-Tyrell alliance: gold and green.[16]

It was just the sort of notion that would appeal to Renly Baratheon; a splendid new order of knighthood, with gorgeous new raiment to proclaim it.[2]

Brienne: I ask the honor of a place among your Rainbow Guard. I would be one of your seven, and pledge my life to yours, to go where you go, ride at your side, and keep you safe from all hurt and harm.
Renly: Done.[1]

—Brienne of Tarth and Renly Baratheon

I was one of King Renly's chosen seven. With his own hands, he cloaked me with the striped silk of the Rainbow Guard.[17]

—Brienne of Tarth, to Jaime Lannister