From A Wiki of Ice and Fire
(Redirected from Rattleshirt)
Jump to: navigation, search

The Lord of Bones,[2] also mocked as Rattleshirt,[8] is a free folk leader of renown.[1][9] His given name is unknown. In the television adaptation Game of Thrones he is portrayed by Edward Dogliani and Ross O'Hennessy.

The Lord of Bones is a small man with a knobby chin, thin mustache, and pinched cheeks. His eyebrows join over the bridge of his nose, and he has a widow's peak with his dark hair.[9] He has cracked brown teeth and yellow-tinged eyes.[7]

The raider is considered sly, cruel and treacherous.[10] The Lord of Bones distrusts wargs and the Night's Watch.[2][9]

The Lord of Bones is mocked as Rattleshirt due to his boiled leather armor, which is covered with loosely-tied bones that clatter as he moves.[2][9] The bones come from aurochs, cows, elk, goats, humans, mammoths, and sheep.[2] Rattleshirt wears a yellowed broken giant's skull as his helm,[9] and his arms are covered with bearclaws sewn to the leather. Rattleshirt rides a goat-like horse which is also armored in bones.[2] He wields a sword[3] and commands a pack of dogs.[2][9]

Before Mance Rayder made peace between them while becoming King-Beyond-the-Wall, Rattleshirt warred with Harma Dogshead.[3] 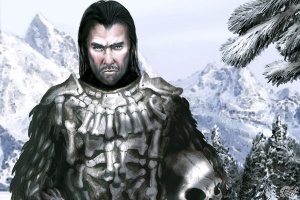 Lord of Bones by Amok ©

When the Night's Watch plans for the coming battle with the gathered wildlings, they are wary of a few of the leaders, Rattleshirt among them.[1]

Rattleshirt leads a party of fourteen free folk and eight dogs that catches up with Qhorin Halfhand and Jon Snow in the Skirling Pass. He claims Ebben's steel battle-axe and orders Ragwyle to gut Jon when the youth attempts to yield, but Ygritte calls for the sparing of Jon's life. Qhorin has secretly encouraged Jon to join the wildlings, and the Lord of Bones reluctantly accepts Jon into his party after the youth slays Qhorin with the aid of his direwolf, Ghost. Rattleshirt claims some of the Halfhand's bones after his body is burned in a pyre.[2]

Rattleshirt brings Jon Snow to Mance Rayder's camp along the Milkwater. He is dismissed by Mance, but not before he casts suspicion on Jon's true motives.[9] Upon Mance's suggestion, Ygritte, Jon, and Longspear Ryk leave Rattleshirt's band for the party of Tormund Giantsbane.[3] Mance tasks his Lord of Bones with doubling patrols and ensuring the free folk host continues south toward the Wall.[3] The eagle of Orell often perches on Rattleshirt's helm.[2][3]

Shortly before the attack on Castle Black takes place, Rattleshirt is spotted near Long Barrow[11] and captured there by Cotter Pyke.[12] The wildling is brought forth out at the meeting at Castle Black between Jon, Janos Slynt, and Ser Alliser Thorne as a witness of Qhorin's death at the hands of Jon. Rattleshirt tells Janos that "All men fear the Lord o' Bones" after being mocked by him, so Ser Glendon Hewett kicks the captive into silence.[13]

The Lord of Bones remains a captive at Castle Black.[14]

Jon Snow, now Lord Commander of the Night's Watch, hears rumors that Stannis Baratheon intends to grant lands and castles to Rattleshirt and Sigorn, the new leader of the Thenns.[15] Stannis and his red priestess, Melisandre, execute Mance for desertion from the Night's Watch and for trying to destroy the Wall with the Horn of Joramun.[7] Before and while being burned in a cage, Mance denies being King-Beyond-the-Wall. Jon has his archers kill the hysterical Mance to end his suffering.[7]

After the Lord of Bones submits to Stannis,[7] Melisandre controls the wildling raider with a magical ruby on his wrist.[16] Stannis assigns him to serve the Lord Commander.[16] Rattleshirt appears larger while clad in mail and plate, and he surprisingly defeats Jon in a sparring session.[17]

Melisandre tasks Rattleshirt with rescuing a girl she believes to be Jon's sister, Arya Stark. Jon is shocked to learn that Melisandre glamored Mance and Rattleshirt to each appear as the other, with the Lord of Bones actually the panicked man burned in Melisandre's cage.[5] Now using the name Abel, Mance travels with spearwives to rescue Arya from Ramsay Bolton at Winterfell.[18]

Quotes by the Lord of Bones 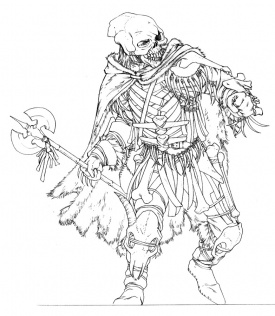 Lord of Bones: To crows I be the Lord o' Bones.


Qhorin: I see no lord. Only a dog dressed in chickenbones, who rattles when he rides.


Lord of Bones: It's your bones I'll be rattling soon, Halfhand. I'll boil the flesh off you and make a byrnie from your ribs. I'll carve your teeth to cast me runes, and eat me oaten porridge from your skull.[2]
—Lord of Bones to Qhorin Halfhand

Lord of Bones: The free folk have no need of cravens.


Ygritte: This is the Bastard of Winterfell, who spared me. Let him live.


Lord of Bones: The black crow is a tricksy bird. I trust him not.[2]
—Lord of Bones and Ygritte

Might be you fooled these others, crow, but don't think you'll be fooling Mance. He'll take one look a' you and know you're false. And when he does, I'll make a cloak o' your wolf there, and open your soft boy's belly and sew a weasel up inside.[9]

—Lord of Bones to Jon Snow

—Lord of Bones to Mance Rayder

—Lord of Bones as "Mance Rayder" upon seeing Melisandre's cage

Quotes about the Lord of Bones 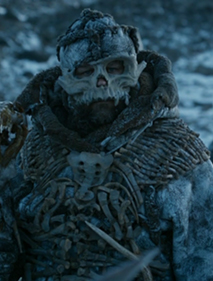 Edward Dogliani as Rattleshirt in Game of Thrones

Rattleshirt, we called him. Treacherous and bloodthirsty. If there's honor in him, he hides it down beneath his suit of bones.[10]

A small, malicious, treacherous man, as stupid as he is cruel. Jon did not believe for a moment that he would keep faith.[7]

The Lord o' Bones? No one ever trusted Rattleshirt but fools.[5]

Rattleshirt could wash his hands a hundred times a day and he'd still have blood beneath his nails.[5]