Fleet from the Arbor - by Tomasz Jedruszek © Fantasy Flight Games

It is the largest fleet in Westeros.[2] Lord Paxter Redwyne owns two hundred warships, while also serving the Redwynes are five times as many merchant carracks, wine cogs, trading galleys, and whalers.[3] Paxter's galleas is the Arbor Queen.[4] 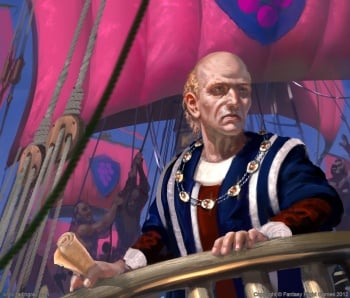 During the coming of the Andals to Westeros, Andals were prevented from landing in the Reach by the fleets of the Redwynes of the Arbor and the Hightowers of Oldtown.[5]

The war fleet of the Arbor participated in the invasion of the Iron Islands by King Aegon I Targaryen in 2 AC.[6]

When Lord Alyn Velaryon sailed to the Sunset Sea to confront Lord Dalton Greyjoy, Lord Redwyne agreed to augment the Oakenfist's fleet with thirty ships. Alyn eventually left for the westerlands when the Redwyne ships were slow to arrive, however. The Redwyne contingent met Alyn during his return voyage south.[7]

During Robert's Rebellion, Lord Paxter Redwyne's galleys established a blockade at the siege of Storm's End. The smuggler Davos evaded the cordon, however, and delivered onions and salt fish to Stannis Baratheon and his starving garrison within the castle.[8]

During Greyjoy's Rebellion, warships from the Arbor served under Stannis when he smashed the Iron Fleet in the sea battle off Fair Isle.[9]

With his sons Horas and Hobber held at the Red Keep by Cersei Lannister, Lord Paxter Redwyne refrains from supporting Renly Baratheon at the start of the War of the Five Kings.[10] The Redwynes support King Joffrey I Baratheon, however, after Lord Petyr Baelish negotiates an alliance between the Tyrells and the Lannisters.[11]

With the royal fleet largely destroyed in the Battle of the Blackwater, the Redwyne fleet is to sail from the Arbor to Blackwater Bay.[12] At the time of Joffrey's royal wedding, Lord Paxter promises his fleet will soon set sail.[13] 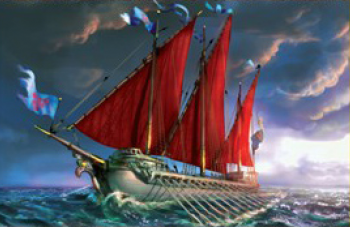 While most of the westermen return home after the funeral of Lord Tywin Lannister, two thousand Lannister soldiers remain at King's Landing so they can eventually be transported by the Redwyne fleet to Dragonstone.[2] Aurane Waters suggests the crown commission new dromonds to replace the ships lost at the Blackwater.[14] Queen Regent Cersei Lannister agrees, as she considers the Redwynes to be too close to their liege lords, the Tyrells.[15]

Most of the Redwyne fleet aids in the siege of Dragonstone, ferrying men over to the island. Some Redwyne ships patrol Shipbreaker Bay to the south, aiding Lord Mace Tyrell in his siege of Storm's End by preventing that castle from being resupplied.[3]

With the Redwynes away in the narrow sea, King Euron Greyjoy sends his ironborn and the Iron Fleet to attack first the Shield Islands and then the Arbor.[16][17] The ironborn take or sink the Redwyne warships left behind for defense, which number no more than a dozen.[18] To hasten the conquest of Dragonstone so the Redwyne fleet can return to the Reach,[3] Ser Loras Tyrell leads a successful assault in which he is wounded.[18]

Although Horas and Hobber are arrested through Cersei's plotting against Margaery Tyrell, the queen regent ensures they will be vindicated in order to keep the loyalty of the Redwynes and their navy.[19]

Paxter, the lord admiral and master of ships,[20] is reported as passing the Broken Arm[21] and then Dorne[22] during his voyage back to the Sunset Sea to deal with the ironmen.

At Ghost Hill Valena Toland tells Princess Arianne Martell she was wise not to come by sea. Since the Redwyne fleet passed through the Stepstones, those waters have been crawling with strange sails, all the way north to the Straits of Tarth and Shipbreaker Bay.[23]