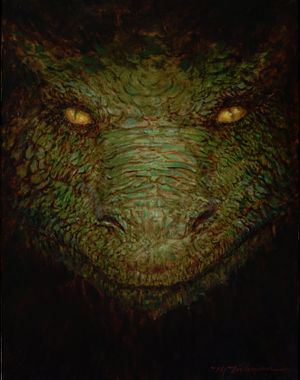 Rhaegal is one of the dragons born on the Dothraki Sea, along with Drogon and Viserion. Commanded by Daenerys Targaryen, he was named for her brother, Prince Rhaegar Targaryen.[1]

Rhaegal is a green and bronze dragon:[2][3] his scales[4][5] and wings[6] are jade-green, while his eyes are bronze.[5][N 1] He has black claws and teeth like black needles.[6] His flames have been described as being yellow,[4] yellow and red[7] and "orange-and-yellow fire shot through with veins of green".[8]

Rhaegal's egg is a deep green, with burnished bronze flecks that comes and goes depending on how Daenerys turns it.

The maegi Mirri Maz Duur proclaims that in order to bring new life one had to give life. Daenerys burns Drogo's body, along with Mirri Maz Duur herself and the three eggs to give birth to Rhaegal, along with his brothers, Viserion and Drogon.[9]

In the Red Waste, Daenerys names the green dragon Rhaegal, after her brother Rhaegar.[1]

When Daenerys arrives in Qarth, Rhaegal and the other dragons are a marvel in the ancient city.[2][6]

When Daenerys receives the news of the Usurper's death, Rhaegal is with her. Beneath her fingers he stares at Quhuru Mo with eyes of molten gold. When his mouth opens, his teeth gleam like black needles.[2]

During her visit to the Hall of a Thousand Thrones to petition the Pureborn, Daenerys takes Rhaegal with her on her shoulder.[6]

Rhaegal is about the size of a small dog. At Astapor, Jhiqui frees Rhaegal to attack the Good Masters when Daenerys has the Unsullied attack their former masters.[10]

Rhaegal and the other dragons begin to misbehave. Rhaegal snaps at Irri.[12]. His head is now larger than a horse's.[5]

When Drogon allegedly kills the young girl Hazzea outside Meereen, Daenerys has Viserion and Rhaegal chained in a makeshift "dragon pit" in the Great Pyramid.[13]

When Quentyn Martell tries to tame the dragons, Rhaegal mortally burns him with dragonfire.[5] Once loosed from the pit, Rhaegal makes his new lair in the great black pyramid of Yherizan, where he hulks in the gloom like a fat woman bedecked with glowing orange jewels. The Pyramid is now a smoldering ruin, and its former occupants are either dead or in flight.

Ser Barristan Selmy notes that thus far Rhaegal has shown himself to be more dangerous than his brother Viserion.[14]

As the Second Siege of Meereen begins, Rhaegal and Viserion are both drawn to the battle. Tyrion Lannister sees Rhaegal circling above the bay, banking and turning as longships and galleys clash and burn below him. When Ben Plumm and his companions come galloping back from the camp of Malazza, the Girl General, Rhaegal is still prowling, soaring in wide circles above the city and the bay on great green wings.

The green one shall be Rhaegal, for my valiant brother who died on the green banks of the Trident.[1]