From A Wiki of Ice and Fire
Jump to: navigation, search
For the sister-wife of King Aerys II Targaryen, see Rhaella Targaryen.

Septa Rhaella, born Rhaella Targaryen, was a daughter of Prince Aegon and Princess Rhaena Targaryen. She had an older twin sister, Aerea.[3][1]

Rhaella was the mirror image of her twin-sister, Aerea.[4] She had silver hair and purple eyes.[1]

As a young child, Rhaella was a bolder and more robust girl than her sister Aerea. She was said to be a bold and willful child who was a terror to her septas.[4]

Following the coronation of her uncle Jaehaerys at Oldtown, however, Rhaella devoted herself to prayer and study, and never again required chastisement. This change in character, as well as a simultaneous change in the character of her twin, Aerea, led to rumors that Rhaella had switched places with her sister Aerea while both girls had been in the city.[4] 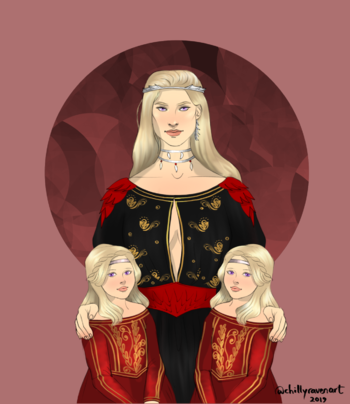 Rhaella Targaryen, with her mother Rhaena and twin sister Aerea, by Chillyravenart ©

Rhaella was born in 42 AC at Casterly Rock, where her father, Prince Aegon Targaryen, and her mother, Princess Rhaena Targaryen, were residing, hiding from the Poor Fellows who had risen in rebellion against House Targaryen.[1]

Upon the death of Rhaella's grandfather, King Aenys I Targaryen, the crown had been claimed by her uncle Maegor, who thereby usurped the claim of her father Aegon.[5] Aegon finally went to battle against Maegor in 43 AC, but was killed in battle later that year. Rhaena disguised Rhaella and her twin sister Aerea and sent them away with allies. Not even Rhaena herself was aware where Rhaella and Aerea went. Both girls were found by Tyanna of the Tower, one of King Maegor's wives. When Rhaena was summoned to King's Landing in 47 AC to marry Maegor, Tyanna used the girls' presence to assure her cooperation.[5][1]

As she was the younger of the two girls, Rhaella was sent to Oldtown to be trained as a septa, while her twin sister was named Maegor's heir and kept at court. When Rhaella's mother, Queen Rhaena, learned that Prince Jaehaerys, the youngest of her brothers, had announced his claim to the Iron Throne, Rhaena fled King's Landing on Dreamfyre to join Jaehaerys's cause, taking Aerea and the Valyrian steel sword Blackfyre with her. An enraged Maegor sent a rider to Oldtown, commanding Lord Hightower to behead Rhaella as punishment for Rhaena's betrayal. However, Lord Hightower refused and instead imprisoned the messenger.[1]

Reign of Jaehaerys I 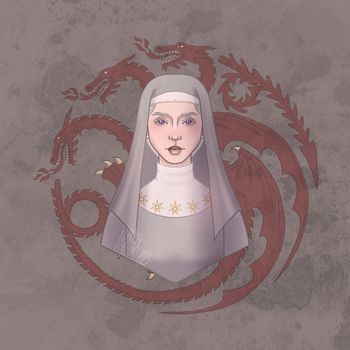 Rhaella was present in Oldtown at the coronation of King Jaehaerys I Targaryen in 48 AC, together with her mother and sister. After her sister had left with King Jaehaerys back to King's Landing, a change in the behaviors of both girls was noticed, and Rhaella's behavior appeared much as that of her sister Aerea, whilst Aerea became much more like Rhaella had been. At the time, it was widely believed that someone had used the presence of both girls at Oldtown to switch them. This was never proven, however, and no one was inclined to question the potential deception, as Aerea (or now Rhaella disguised as Aerea) was the heir of King Jaehaerys I until he had children of his own.[4]

In 50 AC, after he had failed to undo the secret marriage of King Jaehaerys I to his younger sister, Alysanne, Lord Rogar Baratheon suggested setting Jaehaerys aside before he reached manhood, and in his place crowning Princess Aerea. For this, Rogar was fired from his office. He attempted to seize Aerea by force, but the small council had acted faster and hidden the girl. Unwilling to give up, Lord Rogar then sent his brother Orryn to the Starry Sept at Oldtown to demand that the High Septon turn over Rhaella, still a novice, so she could be taken to Storm's End. There, he planned to force her to confess that she was the actual Princess Aerea, not Rhaella. Rogar subsequently hoped to crown her queen. However, this plot failed as well.[6]

In 54 AC, while Jaehaerys and Alysanne stayed in Oldtown awaiting the election of the new High Septon, Alysanne met Rhaella, still a novice, when she spent a day with the septas who cared for the city's sick and destitute. Alysanne pronounced her to have become "a learned and devout young woman though much given to stammers and blushes.".[7]

After her sister Aerea had disappeared on Balerion later that same year, Queen Rhaena visited Oldtown, hoping that Aerea might have sought out her twin sister Rhaella. Aerea was not in Oldtown, however. Rhaena visited with Rhaella for a time, and expressed regret about not having been a better mother. In reply, Rhaella embraced her mother and told her "I have had the best mother any child could wish for, the Mother Above, and you are to thank for her.”.[2]

Following the death of Aerea in 56 AC, Queen Rhaena would never again visit King's Landing or Dragonstone, but she did travel to Oldtown once a year to visit Rhaella at the Starry Sept until her death in 73 AC.[2]

By 58 AC, Rhaella had taken her vows as a septa. Near the end of 58 AC, the High Septon sent Rhaella to King's Landing for the tourney held to celebrate the tenth anniversary of the coronation of King Jaehaerys. It was said that Queen Alysanne wept when she saw Rhaella, as she was the very image of Aerea, only older.[2]

Rhaella's name is misspelled as "Rhalla" in earlier prints of The World of Ice & Fire. This was corrected to "Rhaella" in later editions.[8]