From A Wiki of Ice and Fire
Jump to: navigation, search
For other characters with the same name, see Rhaena Targaryen.

In the television adaptation House of the Dragon, Rhaena is portrayed by Phoebe Campbell and Eva Ossei-Gerning (young).[9][10]

Rhaena and her twin, Baela, had fine features, silver-white hair, and purple eyes.[6] As young girls, the twins had been inseparable and impossible to tell apart. Though they were both tall and slim by the age of sixteen, they no longer looked alike. Rhaena was slender and graceful, and Baela was lean and quick with hair as short as a boy's. Rhaena loved to dance whilst Baela preferred to ride and to fly.[2] 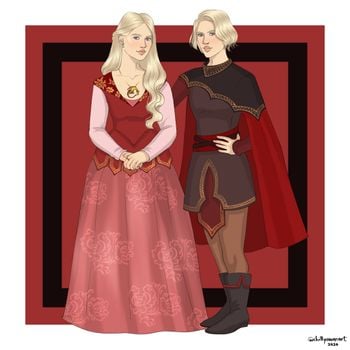 Rhaena and Baela Targaryen, by chillyravenart ©

Rhaena and Baela were born small and sickly in Pentos in 116 AC. Rhaena was named after her maternal grandmother, Princess Rhaenys Targaryen.[6] When they were half a year old, the twins sailed from Pentos to Driftmark with their mother, Laena Velaryon. In 117 AC, Rhaena was presented at court by her father, Prince Daemon Targaryen.[11]

In 118 AC, with the blessing of King Viserys I Targaryen, Rhaena was betrothed to her cousin, Prince Lucerys Velaryon.[6] Rhaena received a dragon egg, but the hatchling dragon was unhealthy and died within hours of emerging from its egg. Eventually, an egg from another clutch, laid by Syrax, was given to Rhaena, and it was said that she slept with it every night and prayed for a dragon to match her sister's, Moondancer.[7] 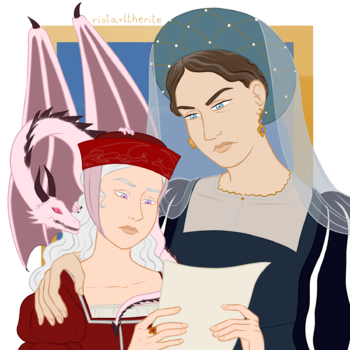 During the Dance of the Dragons, Rhaena was chosen to accompany Prince Joffrey Velaryon to Gulltown for their protection, although they were told it was to defend the Vale of Arryn against King Aegon II Targaryen's dragons. Rhaena brought three dragon eggs with her to the Vale, where she prayed nightly for their hatching.[1]

Rhaena remained in the Vale throughout the duration of the civil war as the ward of Jeyne Arryn, Lady of the Eyrie.[12] In the Vale, Rhaena enjoyed a life of comfort and privilege, with maids brushing her hair and drawing her baths. Singers composed odes to her beauty, and knights jousted for her favor. Rhaena befriended Ser Corwyn Corbray during her stay at the Eyrie, and grew "especially fond" of him.[2] Eventually one of her dragon eggs hatched, and Rhaena quickly bonded with the hatchling, which she named Morning.[13][14] News of Morning's birth reached the greens around the start of 131 AC, greatly troubling them, as they had lost all of their dragons during the fighting. Dowager Queen Alicent Hightower feared that the smallfolk would consider the blacks as more legitimate, due to Morning's birth.[14] However, the war lasted only for another half a year,[15] during which time Morning was still too young to be ridden.[13] 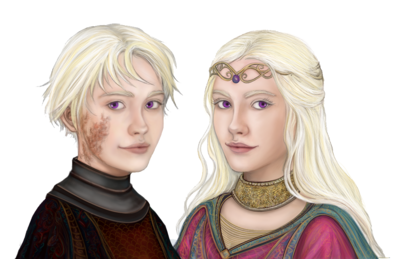 At the end of the war, Rhaena and her dragon accompanied Lady Jeyne, sailing from Gulltown towards King's Landing with a great host. Once at the capital, Rhaena was reunited with her twin sister Baela, and the pair became the darlings of the city overnight. The smallfolk became ecstatic at the sight of Morning, one of the few still living dragons and the only one in King's Landing. However, Rhaena's half-brother, Prince Aegon Targaryen, who had seen a dragon eat his mother Rhaenyra Targaryen, paled when he saw Morning for the first time and commanded his guards to "get that wretched creature out of my sight."[4]

Rhaena and Baela were among the foremost of those pleading for a pardon for their grandfather, Lord Corlys Velaryon. They made their plea directly to Aegon, who went against the wishes of the Hand of the King, Lord Cregan Stark, and pardoned the Sea Snake. Mushroom, on the other hand, claimed that it was Lady Alysanne Blackwood who convinced Cregan to spare Corlys.[4]

After the ascension of her cousin and half-brother, as King Aegon III Targaryen, Rhaena and her sister Baela were thought to be the only living Targaryens aside from the king and his queen, Jaehaera Targaryen, as Prince Viserys Targaryen was presumed dead at the time. Rhaena and Baela were very popular in King's Landing, as they frequently traveled through the city, while Aegon and Jaehaera remained in the Red Keep. The twins often rode out to hunt or hawk, gave alms to the poor, served as hosts, and met with envoys and visiting lords. Dozens of young lords competed for Rhaena's smiles, artists requested to draw or paint her, and the city’s finest dressmakers sought the honor of making her gowns. Everywhere Rhaena went was with Morning, her young dragon, usually coiled around her shoulders like a stole.[2]

In 132 AC, following the sudden death of Rhaena's grandfather, Lord Corlys Velaryon, the council of regents began to discuss the matter of Aegon's heir. Baela and Rhaena were considered to be the only two claimants the realm would likely accept as the childless king's heirs. Despite the fact that Baela was the elder twin, the council considered Rhaena more suitable, as she was the less willful and more tractable of the two. Furthermore, Rhaena had her dragon, Morning, unlike Baela, whose Moondancer had died during the fall of Dragonstone. When Myles Mooton noted that Rhaena only had a hatchling, Lord Roland Westerling further pointed out that Baela had taken down King Aegon II, and that there were many who would be angered should she be crowned. Grand Maester Munkun attempted to end the debate, insisting that both Baela and Rhaena were female and thus disqualified altogether, as that the Dance of the Dragons had shown that they had to favor the male claimant per the ruling of the Great Council of 101 AC. However, the Hand Tyland Lannister pointed out that all the male claimants had been killed.[2]

The regents planned to marry Baela to Lord Thaddeus Rowan to curb her wilful ways and provide a proper consort to a possible queen. However, she greatly disagreed with their choice and escaped to Driftmark to marry Lord Alyn Velaryon, her cousin and a legitimized bastard. This act confirmed the regents' opinion of Baela, and they feared she would soon become pregnant. They decided that Rhaena must be Aegon's heir, and that she should marry quickly. Rhaena agreed to do as the king and council wished, and when Ser Tyland asked if she had any preference from among her suitors, she named Ser Corwyn Corbray, whom she had met in the Vale. Corwyn was not the ideal choice, as he was a second son who had been previously married and widowed. Still, House Corbray was old and prestigious, Corwyn was a great warrior and the bearer of the Valyrian steel sword Lady Forlorn, and his brother Lord Leowyn Corbray was Protector of the Realm. Rhaena and Corwyn were married within a fortnight.[2]

In second half of the year of 133 AC, the court rejoiced when Rhaena announced that she was pregnant, but unfortunately she miscarried within a month. Later that year, young Queen Jaehaera apparently committed suicide, and some wondered if she had become despondent over Rhaena's miscarriage. Desiring to prevent the succession of Rhaena or Baela, the Hand Unwin Peake planned to betroth King Aegon to his maiden daughter Myrielle. However, the other regents and the lords of the realm felt Lord Unwin had overstepped, and instead forced him to declare a ball to be held on Maiden's Day, where the king himself would be able to choose his own bride. At the Maiden's Day Ball, hundreds of young maidens were presented to the king, but when only a few remained, Baela and Rhaena suddenly arrived. Though Baela was heavily pregnant, and Rhaena pale and thin from her miscarriage, they were as one, dressed in black velvet and red rubies, with the Targaryen sigil on their cloaks. Mounted on a pair of black chargers, the twins rode down the hall together, and Rhaena announced to Aegon that they had brought his new queen. Rhaena's husband Corwyn presented Baela's young ward, Daenaera Velaryon, and at the ball's conclusion, Aegon announced he would marry Daenaera. The twins were cheered by the people of King's Landing when Aegon wed Daenaera on the last day of 133 AC.[3] However, Unwin Peake had never cared for Baela, but now disliked Rhaena as well; he was convinced both of them were working against him.[16] 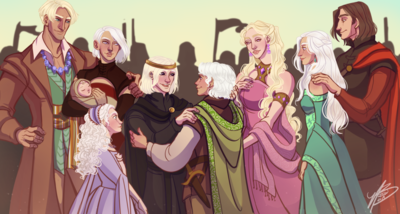 The reunion of King Aegon III and Prince Viserys Targaryen, attended by Rhaena and her family, by Naomimakesart ©

In 134 AC, Rhaena and Corwyn accompanied the royal court to the harbor of King's Landing to welcome back Alyn Velaryon from his first great voyage, and the Oakenfist revealed that he had returned with Prince Viserys Targaryen, Aegon's long-lost younger brother. Viserys's return greatly pleased the regents as well as his family, as he was the undisputed heir apparent, ahead of any child born to Baela or Rhaena, or the twins themselves.[16]

Later that year, Corwyn became a member of the council of regents, and in the spring of 135 AC, he was sent to the Vale to settle the matter of succession to House Arryn and restore peace. On the third day of the third moon of 135 AC, Rhaena rode Morning for the first time. She only circled once around the city before returning to the Dragonpit, but soon grew bolder and flew farther every day. However, she only once landed in the Red Keep, as King Aegon was still terrified of dragons, and shortly thereafter Rhaena flew across Blackwater Bay to stay at Dragonstone where, as she said, "Dragons and those who ride them are more welcome." Later that spring, Rhaena's husband Corwyn was killed at Runestone in the Vale while dealing with the Arryn succession. Baela traveled to Dragonstone to comfort her widowed twin, and to ensure that Rhaena would not use Morning to attempt to avenge her husband's death.[8]

When preparations were being made in 136 AC for a royal progress to be held after Aegon turned sixteen, Rhaena desired to accompany the king on Morning. However, this suggestion was delicately deflected by the council of regents.[8]

Later in life, Rhaena married Garmund Hightower, the younger brother of Lord Lyonel Hightower,[4] by whom she had six daughters.[17]

So long as [my husband] is kind and gentle and noble, I know that I shall love him.[2]

—Rhaena, to the council of Aegon III's regents

Brother, if it please you, we have brought your new queen.[3]

—Leowyn Corbray, to the regents