From A Wiki of Ice and Fire
Jump to: navigation, search
For others with the same name, see Rickon Stark (disambiguation).

Rickon Stark is Eddard and Catelyn's youngest child, only three years old when the series begins. Rickon is a naturally aggressive and strong-willed child, but his youth makes it difficult for him to cope with the terrible changes that come to his family and life. He is usually accompanied by his direwolf, Shaggydog. In the television adaptation Game of Thrones Rickon is played by Art Parkinson.[4]

Rickon favors his mother Catelyn in appearance, having the bright blue eyes, auburn hair, and easy smile of a Tully.[5][6][7]

Young Rickon is playful but temperamental and stubborn.[8][9] He has a breathless laughter[10] and fiercely tries to be like his older brothers.[11] Rickon's family often thinks of him as a baby.[12][13][14]

Rickon wears an ermine mantle.[15] His bedchamber is half a turn below Bran's in a tower at Winterfell.[16]

Born at Winterfell in 295 AC, Rickon is the third son and youngest child of Catelyn and Eddard Stark, Lord of Winterfell. Maester Luwin helped deliver the child.[17] Rickon's brothers are Robb and Bran, while his sisters are Sansa and Arya. Rickon also has a bastard half-brother, Jon Snow, from whom Rickon begs for sweets.[7] Rickon and Shaggydog in the crypts of Winterfell, by Chris Casciano © Fantasy Flight Games

Lord Eddard Stark allows his children to adopt a litter of direwolves found by Jon Snow.[18] Rickon is initially afraid of his pup,[19] which he eventually names Shaggydog.[20] When King Robert I Baratheon visits Winterfell, Jon prods his half brother on when Rickon stops during the procession.[21]

When he departs for King's Landing to serve Robert as Hand of the King, Eddard leaves his youngest son at Winterfell with the boy's mother, Catelyn Stark, and eldest brother, Robb.[17] Bran Stark was supposed to join his sisters, Sansa and Arya, with Eddard in the capital, but Rickon's older brother becomes comatose after falling from the First Keep.[20]

A grief-stricken Catelyn lingers at Bran's bedside, so Rickon follows Robb around, crying. After Bran wakes from his coma, Catelyn departs Winterfell to inform Eddard of the catspaw assassin, leaving Robb to rule the castle.[6] Rickon enjoys running with Shaggydog, Grey Wind, and Summer—the direwolves of Robb and Bran—in the castle's yard.[8] Rickon becomes upset whenever Robb departs Winterfell to address matters in the north.[8] Rickon calls Shaggy back to him when the direwolves threaten Tyrion Lannister.[8]

Having learned that Robb is marching south to rescue their father from imprisonment in King's Landing, an upset Rickon hides in the crypt of Winterfell. Rickon slashes at Robb's men with a rusty sword and Shaggydog wounds Gage and Mikken. Rickon cries even more when Shaggy is chained in Farlen's kennel, and the boy refuses to bid farewell when Robb departs Winterfell.[22]

Bran has a dream of Eddard in the crypt, so Osha and Maester Luwin bring the boy to the vaults so he can see that his father's tomb is empty. Shaggydog jumps out of the shadows and wounds Luwin, however, and Summer begins fighting with Shaggy. Four-year-old Rickon, who had freed Shaggy from the kennel, explains that he had also dreamed that Eddard would be coming home. Rickon accompanies the group to Luwin's tower, and the maester shows obsidian arrowheads to the boys. Rickon cries when a raven then arrives at the tower bringing word that Eddard has been executed by order of King Joffrey I Baratheon in the capital.[23]

After the Battle of the Camps, Robb is proclaimed King in the North at Riverrun by northmen and rivermen.[24] 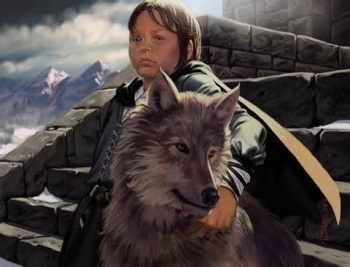 Rickon is initially upset when Big Walder and Little Walder Frey arrive at Winterfell as wards according to the alliance between Houses Stark and Frey.[25] When Little Walder knocks the boy into a pool while playing lord of the crossing, Shaggy leaps at the guest. Rickon then becomes friends with the Frey cousins, playing other games like monsters and maidens, rats and cats, and come-into-my-castle. Bran is angered when his brother shows the crypt of Winterfell to their guests.[25] Rickon sits near the Freys during the harvest feast.[15]

With his mother Catelyn away in the south, Rickon refuses to have his hair cut and instead bites a girl who tries to cut his long, unruly hair.[15] Ser Rodrik Cassel, the castellan of Winterfell, confines the direwolves in the godswood of Winterfell after Shaggy bit Little Walder.[25] Maester Luwin discounts the dreams which Bran and Rickon experienced before Winterfell was informed of Lord Eddard's death,[26] while Jojen Reed explains he has had green dreams of the Stark brothers in the crypt[9] and also of the boys being flayed by Reek.[9]

Rickon became a hostage of Theon Greyjoy after the capture of Winterfell by ironborn. Meera Reed protects Rickon when Stygg kills Mikken.[27] After Osha, Hodor, the direwolves, and the Reed and Stark siblings vanish from the castle, Theon and Reek hunt for them in the wolfswood to no avail.[16] The hunters instead kill two miller's boys at the Acorn Water, with Reek flaying the children and Theon presenting their tarred heads to Winterfell as those of the missing Starks.[28]

During the Battle of the Blackwater, Sansa Stark sings for her siblings.[29] Arya Stark becomes teary-eyed at Harrenhal after learning of her brothers' fate.[30]

Rickon and his companions have secretly hid from Theon in the crypts, however, and they survive the sack of Winterfell by Reek, who is actually Ramsay Snow.[31][1] The group emerges to find Winterfell in ruins and a mortally wounded Maester Luwin, who tells them that Bran and Rickon need to be separated and taken into hiding. Osha agrees to look after Rickon, taking the prince and Shaggydog to parts unknown.[1]

Traveling north toward the Wall, Bran Stark wonders if Osha took his brother to White Harbor or the Last Hearth.[32]

Robb Stark, the King in the North, sleeps with Jeyne Westerling at the Crag after having been informed of his brothers' supposed deaths. Robb then marries Jeyne, breaking his promise to marry a daughter of Lord Walder Frey.[33] Believing that Bran and Rickon are dead, Catelyn Stark frees Ser Jaime Lannister from captivity at Riverrun and tasks him with retrieving Sansa and Arya from King's Landing.[34][35] After Lord Hoster Tully dies at Riverrun, Catelyn thinks her father will be awaited in the afterlife by his grandsons, Bran and Rickon.[36] Maester Aemon informs Jon Snow of his brothers' murders when the youth returns to Castle Black after the great ranging.[37]

Sansa, expecting to marry Willas Tyrell, hopes to one day name sons after Rickon, Bran, and Eddard.[38] Lord Tywin Lannister forces her to marry Tyrion Lannister,[39][40] however, so that House Lannister can one day claim Winterfell.[36] To prevent that possibility, King Robb names his half brother Jon as his heir.[41][42] Robb and Catelyn are then murdered by Freys and Boltons in the Red Wedding, however.[43]

Most of Westeros believes Rickon dead, but Lord Wyman Manderly and Robett Glover learn from Wex Pyke, Theon's onetime squire and a survivor of the sack of Winterfell, that the boy is alive. Wex tells them—via writing and chalk drawings since he cannot speak—that Ramsay killed Rodrik Cassel, not Theon, in the battle at Winterfell, and that Wex followed a boy, a woman, and a direwolf after they left the castle.[44] Wex learned that Osha was taking Rickon to Skagos.[45]

When Lord Davos Seaworth attempts to convince Lord Manderly to take up Stannis Baratheon's cause, Wyman brings Wex into their meeting in the New Castle and explains to Davos what Wex witnessed. Wyman explains that in order for House Manderly to take Stannis as king, Davos must use his smuggling skills to retrieve Rickon, the heir of House Stark with Robb dead and Bran's fate unknown, from Skagos.[44]

Ramsay, who is now Lord of Winterfell,[46] intends to kill Bran and Rickon with his hounds if the Stark boys reappear.[47]

Northmen in Stannis's army at the crofters' village want the king to execute Theon for having killed supposedly Bran and Rickon. Theon, who has been tortured by Ramsay, incoherently tries to explain his actions to his sister, Asha Greyjoy.[48] Art Parkinson as Rickon in Game of Thrones

Rickon: You let my father be. You let him be.

Are we going home? I want my horse. And I want applecakes and butter and honey, and Shaggy. Are we going where Shaggydog is?[1]

Rickon needs you. He's only three, he doesn't understand what's happening. He thinks everyone has deserted him, so he follows me around all day, clutching my leg and crying. I don't know what to do with him.[6]

His baby brother had been wild as a winter storm since he learned Robb was riding off to war, weeping and angry by turns.[22]

Though he knew Lord Eddard was dead, sometimes Rickon forgot ... willfully, Bran suspected. His little brother was stubborn as only a boy of four can be.[9]

Brienne: I ... there are no words, my lady. My good lady. Your sons, they ... they're with the gods now.
Catelyn: Are they? What god would let this happen? Rickon was only a baby. How could he deserve such a death?[11]

—Brienne of Tarth and Catelyn Stark

Roose Bolton has Lord Eddard's daughter. To thwart him White Harbor must have Ned's son ... and the direwolf. The wolf will prove the boy is who we say he is, should the Dreadfort attempt to deny him. That is my price, Lord Davos. Smuggle me back my liege lord, and I will take Stannis Baratheon as my king.[44]