Ser Ronnet Connington, also known as Red Ronnet, is the Knight of Griffin's Roost.[2] He is a landed knight[3] and the head of House Connington. Ronnet has a bastard son, Ronald Storm.

Ronnet is a husky man[2] with a long red beard and long red hair.[4] He is considered fierce.[5]

Ronnet was once betrothed to Brienne of Tarth. This was his father Ronald's idea, who probably considered his son marrying the daughter of Lord Selwyn Tarth of Evenfall Hall a good match, as the Conningtons were only landed knights. However, Ronnet was opposed, having been told that Brienne was ugly.[6] When they first met at Evenfall, the two had the same height, although Ronnet was six years older. Brienne remembers how Ronnet brought a rose to give it to his betrothed. She was not able to look him in the eye or speak the simple words of welcome that she had been taught, however.[7] When he handed her the rose, he told her that this was all she would ever have from him, as he had no real interest in marrying her.[6]

During the War of the Five Kings, Ronnet is with King Renly Baratheon's host at Bitterbridge. He participates in a great mêlée in which his once-betrothed, Brienne of Tarth, also joins. Brienne, using the mêlée to take revenge on a couple of former suitors, considers meeting Ronnet last among them a gift by the Mother and every blow she deals him sweeter than a kiss, defeating him in the end.[2][8]

Ronnet is among the lords and knights that follow Renly to Storm's End and switch sides to King Stannis Baratheon after Renly’s death.[5]

Ronnet survives the Battle of the Blackwater, either being taken captive or turning sides in the midst of the conflict, and is presented to King Joffrey Baratheon in the throne room to swear his allegiance.[5] 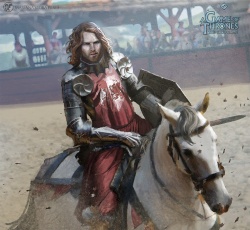 When Brienne of Tarth meets Podrick Payne for the first time and he is unable to even pronounce his own name, she feels a rush of sympathy for the boy, remembering how, at the age of twelve, she was unable to speak the simple words of welcome to her betrothed Ronnet Connington that she had been taught.[7] She later has a dream, in which she changes the outcome of her first meeting with Ronnet, cutting his hand off when he holds the rose out to her.[9]

Ser Ronnet is spotted by Ser Jaime Lannister riding at a quintain in the yard of the Red Keep in which he breaks his lance clean.[10]

When Jaime is sent north to end the siege of Riverrun, Ser Ronnet accompanies him as his standard bearer. He joins Jaime and others for supper at Castle Hayford on the first night of their voyage. At Harrenhal, Jaime comes across Ronnet as he inspects the bear pit. When asked what he is doing there, Ronnet explains he wanted "to see where the bear danced with the maiden not-so-fair". He asks Jaime whether it is true that Brienne fought naked and, when Jaime denies this, says that the sight might have made the bear flee in terror. Jaime realizes that Ronnet knows Brienne, but he is completely surprised when he learns that they were engaged. Ronnet shares some details about this as well as his utter disdain for her. When he suggests that the bear was "less hairy than that freak", Jaime snaps and hits him with his golden hand on the mouth, sending him tumbling down the steps and causing some bleeding. Jaime demands that Ronnet respect a highborn lady and that he call her by her name, in reply to which Ronnet speaks of "Brienne the Beauty".[6]

After Harrenhal, Jaime, to get rid of Ronnet, charges him with returning Ser Wylis Manderly to White Harbor via Maidenpool.[11] He also gives him command of Gregor Clegane's former men as an escort, so Jaime will be rid of them, too.[4]

When Jon Connington retakes his former seat Griffin's Roost, until then ruled by his cousin Ronald's son Ronnet, he learns that Ronnet is away, said to be fighting in the Riverlands with Ser Jaime Lannister. Jon is relieved about this, as he expected that Ronnet would fight for Griffin's Roost and he would not have wanted to celebrate his return home by killing one of his own kin. Ronnet may be the son of the cousin who took advantage of his downfall, but he was a child at the time and Jon bears him no personal grudge. However, Jon considers it fortunate that Ronnet's siblings Raymund and Alynne, as well as his bastard son Ronald Storm become his captives, as they would make good hostages in case Ronnet should return and try to get the castle back. He announces, "No harm will come to any of you unless Red Ronnet proves an utter fool."[12]

Ser Ronnet arrives in Maidenpool in the company of twenty soldiers, some of whom immediately commit crimes. From Maidenpool, he is sent to King's Landing and brought before Ser Kevan Lannister, Lord Mace Tyrell, Lord Randyll Tarly and the other members of the small council, to determine whether he was involved when the Golden Company attacked the Stormlands. Ronnet swears he is King Tommen Baratheon's man and will prove it with his sword by bringing the council the heads of his uncle Jon Connington and the Targaryen pretender, Aegon Targaryen. The council decides to put him under guard until they march on Jon and the Golden Company, where he will be given a chance to prove his loyalty. After Ronnet has been taken away, Grand Maester Pycelle points out how his promise of delivering the heads of Jon and Aegon reflects Jon's promise to King Aerys II Targaryen to bring him the head of Robert Baratheon. Randyll suggests sending Ronnet and all in his company to the Wall.[4]