The sack of Winterfell occurs when House Bolton has the castle burned shortly after the battle at Winterfell.[3]

House Greyjoy invades the north during the War of the Five Kings, leading Ser Rodrik Cassel to take Winterfell's garrison to assist in the defense of Torrhen's Square. Since Rodrik is away, Theon Greyjoy is able to capture lightly-defended Winterfell by stealth. While Rodrik is gathering an army to retake Winterfell, Theon allows a previously-imprisoned House Bolton serving man, "Reek", to leave Winterfell in search of aid when he promises to find a few hundred reinforcements for Theon.[4]

When Rodrik's scouts approach Winterfell, Maester Luwin warns Theon his ironborn will not hold the castle against an assault. Urzen, Stygg, and ten men previously brought by Asha Greyjoy abandon Theon's cause. He is left with only seventeen followers, including his squire Wex Pyke, Black Lorren, Red Rolfe, Kromm, Werlag, Tymor and his two brothers, Ulf the Ill, Harrag Sharp, four Harlaws (probably including Dykk and Gevin), two Botleys, and Kenned.[3]

When the ironborn-held Winterfell is besieged by Rodrik's Stark army of near two thousand, Luwin tries to persuade Theon to surrender and join the Night's Watch. They are interrupted by the arrival of House Bolton's garrison from the Dreadfort, however, which betrays Rodrik's army and routs it in the battle at Winterfell's winter town. The Boltons lose only twenty or thirty men from their force of near six hundred. 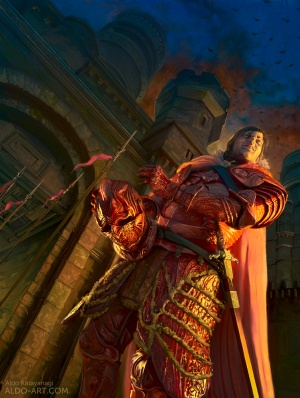 Ramsay Snow during the Sack of Winterfell

After the battle ends, a group of Dreadfort riders approaches Winterfell's main gate. Their leader, whom Theon Greyjoy dubs "Red Helm" because of his fine armor, has the bodies of Rodrik Cassel, Cley Cerwyn, and Leobald Tallhart dropped. Theon then allows the Dreadfort men to pass Winterfell's moat and inner gate. Theon recognizes Red Helm to be Reek when he removes his helm, but he is actually Ramsay Snow, the Bastard of Bolton. When Theon balks at relinquishing his bedwarmer Kyra, Ramsay strikes Theon and the Bolton men begin to kill the ironborn, including Red Rolfe, Kenned, and Ulf the Ill,[3] although Black Lorren is able to kill a few Boltons before he too falls.[5] Maester Luwin is speared and ridden over. Ramsay orders his men to spare the wards from House Frey, Big Walder and Little Walder, and orders his men to burn Winterfell.[3]

Unbeknownst to Theon and Ramsay, hiding in the crypts of Winterfell are Bran and Rickon Stark, Meera and Jojen Reed, Hodor, and Osha. The direwolves Summer and Shaggydog, who are outside of Winterfell, smell the blood and burnt flesh from the battle and ensuing sack, and they hear the Boltons attack the defenseless people of Winterfell and burn its buildings. The next morning the direwolves find only wild dogs, dead bodies, and dying horses amidst the burning winter town.

When Bran and his companions leave Winterfell's crypt that morning, they find that one side of the First Keep has fallen away and its interior is burnt. Winterfell's previously broken tower remains standing, however. After being joined by Summer and Shaggydog, they reconnoiter Winterfell. Its granite walls still stand, though somewhat blackened by fire, but the interior is heavily damaged. The Great Hall's roof has collapsed, fires are visible in its cellar and a storehouse, and the glass gardens are destroyed. The stables have burned along with the horses, such as Dancer and Smiler, while most of the hounds were slain in the kennels. Water from Winterfell's hot springs leaks from the Library Tower. The bridge between the Bell Tower and the rookery has collapsed, while Luwin's turret is destroyed. The sept built by Lord Eddard Stark for Lady Catelyn Tully is burned. The iron portcullis at the Hunter's Gate has been warped by heat.[5]

They find Luwin dying in the godswood, which is mostly unscathed. The group separates after Osha gives Luwin the gift of mercy. As Bran leaves Winterfell, he believes that the castle will survive despite the destruction.[5]

Concept art by Kim Pope for Game of Thrones

At Riverrun, Lothar Frey tells Robb Stark, the King in the North, of a letter the Frey wards wrote to Lord Walder Frey. The youths claim that Theon's ironmen had burnt Winterfell and put its men to the sword, but that Ramsay had led the surviving women and children to safety at the Dreadfort.[6] At the Twins prior to the Red Wedding, Lord Roose Bolton tells Robb that Ramsay has captured Theon and indicates Ramsay is torturing his captive.[7]

Theon's sister, Asha Greyjoy, visits Winterfell before returning to the Iron Islands. Finding only wolves eating the corpses and unable to identify Theon's body, Asha thinks the northmen were fighting each other.[8]

Wex Pyke, Theon's squire, survives the sack by hiding in Winterfell's godswood. Wex later reveals to Lord Wyman Manderly that Ramsay took Theon and the women of Winterfell back to the Dreadfort.[9]

After being tortured by Ramsay at the Dreadfort,[10] Theon attends Ramsay's wedding to "Arya Stark" at Winterfell. Most of the towers and keeps are roofless, and some have collapsed. Roose has squatters build stout new gates and a new roof for the Great Hall, after which he has the squatters hanged. The kitchens, barracks keep, and stables are also rebuilt, although the quality is questionable.[11][12] 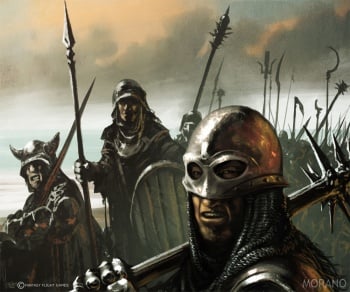 —Ramsay Snow to his men

All through the night the fires crackled, and once there was a great roar and a crash that made the earth jump under his feet. Dogs barked and whined and horses screamed in terror. Howls shuddered through the night; the howls of the man-pack, wails of fear and wild shouts, laughter and screams. No beast was as noisy as man.[5]

—thoughts of Bran Stark while in the mind of Summer

If the gods are good, the Others will take them that did this work.[5]

The tops of the keeps and towers still stood as they had for hundreds of years, and it was hard to tell that the castle had been sacked and burned at all. The stone is strong, the roots of the trees go deep, and under the ground the Kings of Winter sit their thrones. So long as those remained, Winterfell remained.[5]

Aemon: Your brothers died at the command of Theon Greyjoy, after he took Winterfell in his father's name. When your father's bannermen threatened to retake it, he put the castle to the torch.
Grenn: Your brothers were avenged. Bolton's son killed all the ironmen, and it's said he's flaying Theon Greyjoy inch by inch for what he did.[13]

—Aemon and Grenn to Jon Snow