Selhorys is a walled Volantene town located at the confluence of the Selhoru and the lower Rhoyne in western Essos.[1] It lies north of Valysar, northwest of Volantis, and south of Chroyane.[2]

Although it is larger than the cities of King's Landing and Oldtown in Westeros,[3] Selhorys is still considered a town, not an independent city.[4] Alone among the major towns, Selhorys stands upon the eastern bank of the Rhoyne, making it more vulnerable to Dothraki than its sister towns west of the river.[4] Timber from the Forest of Qohor is sold in the markets of Selhorys.[5]

Selhorys has towers, domes, and cobbled paths. The city's sandstone walls shelter shops, stalls, and storehouses along the piers. The river gate is guarded by Volantene slave soldiers with tiger stripes, while prostitutes in its brothels are also slaves. Volantene river galleys loaded with slave soldiers protect the waterway.[4] Lanterns within the city are made of colored glass, unlike the parchment lanterns outside of the city walls.[4]

The main square in Selhorys contains an ornate but headless statue of Triarch Horonno and a stone red temple of R'hllor. Pleasure houses and inns front the square, including a large stone inn with an immense turtle hanging above its door.[4] 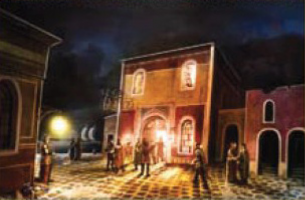 During the Second Spice War, Garin the Great achieved his first victory over the Valyrian Freehold at Selhorys.[6]

The town has been under the authority of Volantis since the Century of Blood, the years of expansion under the tigers.[7]

A Yunkish envoy comes to Selhorys with chests of gold and gems and two hundred slaves, seeking support for their war against Meereen.[4]

The Shy Maid stops at Selhorys, and Haldon Halfmaester and Tyrion Lannister listen to a red priest calling for Volantis to support Daenerys Targaryen. Tyrion plays cyvasse with Qavo Nogarys, a customs officer, within the stone inn. After fornicating with the sunset girl at a modest brothel, Tyrion is kidnapped by Ser Jorah Mormont[4] and taken by him to Volantis on horseback.[8]

Shops and stalls and storehouses huddled beneath a sandstone wall. The towers and domes of the city were visible beyond it, reddened by the light of the setting sun. No, not a city. Selhorys was still accounted a mere town, and was ruled from Old Volantis. This was not Westeros.[4]

Chapters that take place at Selhorys