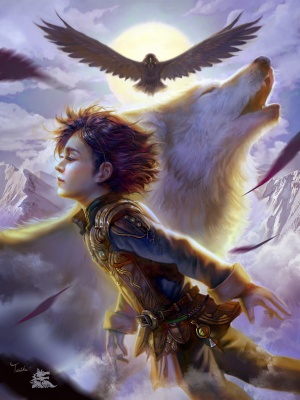 The interaction between the skinchanger's and animal's minds influence both personalities, with detrimental effects to the human if the animal's influence is not fought. It is much easier for a skinchanger to do so if a bond exists between the two parties.[4] An untrained skinchanger may unconsciously enter the mind of an animal, especially while sleeping, particularly if a bond exists.[5] It is traumatic if an animal is killed while its mind is inhabited by a skinchanger.[6] If a skinchanger is killed while inhabiting a creature, a part of his consciousness will remain in the creature.[7][4] The greatest skinchangers were greenseers, who among many other things were also wargs. The greatest greenseers could wear the skin of any beast.[8]

According to Haggon, dogs are easy to bond with, because they live in close proximity to humans and are trusting; it becomes easier with time to enter a dog. Wolves are harder, as one has to forge a lasting bond, much like a marriage. Birds are tempting, but a skinchanger may soon lose contact to the mundane things of earth and want only to fly. Cats are cruel and vain beasts and cannot be easily controlled, only forced. Elk and deer are prey whose skins can cause a man to become cowardly.[4]

An unwritten code for free folk skinchangers, as told by Haggon, forbids them to eat of human meat and to mate as wolf with wolf. Seizing the body of another man is considered the worst abomination.[4]

A skinchanger can experience many deaths while in another body. It is only when the person's human body dies that the "true death" occurs.[4] It is possible for the warg to live a type of second life, a much simpler life inside the mind of an animal he controls. In the second life, the skinchanger's memory slowly fades until nothing of the man is left and only the beast remains.[4]

Skinchangers and wargs are feared and honored by free folk, while people of the Seven Kingdoms hunt them.[9][10] 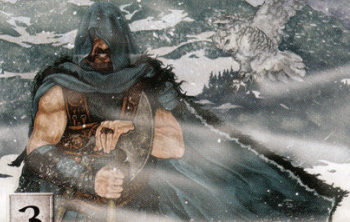 The greenseers of the children of the forest inspired the first legends about skinchangers.[2] Septons and maesters serving with the Night's Watch with the Wall recorded stories of skinchangers among the free folk found beyond the Wall.[2]

According to ancient ballads, Gaven Greywolf was a skinchanger defeated by the Kings of Winter in the War of the Wolves. House Stark also defeated the Warg King in a war for Sea Dragon Point.[11] Rose of Red Lake, one of the legendary children of Garth Greenhand, supposedly could turn into a crane.[12]

Varamyr slew and devoured his mentor, Haggon, and came to rule a dozen free folk villages as a lord of sorts.[4]

Robb Stark, the King in the North, avoids the Golden Tooth by following a goat track found by his direwolf, Grey Wind.[14] Robb is said to have led an army of wargs in the Battle of Oxcross.[15]

During the great ranging, Jon Snow slays the wildling skinchanger Orell[16] and has dreams of his direwolf, Ghost.[17]

Bran briefly slips into the mind of Hodor when his simple-minded friend is scared by thunder.[18]

Part of Orell lives on in his eagle, which attacks Jon.[7] Varamyr claims the eagle, and when the bird is later burned by Melisandre during the battle beneath the Wall.[6] Varamyr is almost driven mad.[19]

Although Arya Stark had chased away her direwolf, Nymeria, the girl dreams of the death of Iggo.[20] Arya later dreams of a wolf recovering a body from the Green Fork.[21]

When they are surrounded by wights, Varamyr attempts to take control of Thistle but the spearwife resists. The humans are killed by wights, but Varamyr begins his second life by entering one of his wolves, One Eye.[4] Bran's direwolf, Summer, later forces One-Eye to submit.[22]

In order to save his own life and the lives of his companions, Bran enters Hodor so that he can fight wights more effectively.[23] Bran furthers enters Hodor in the cave of the three-eyed crow, using him to explore the cavern. Meera and Jojen are unaware of Bran's actions, and Hodor hides deep within himself.[24] Under the tutelage of the three-eyed crow, Brynden Rivers, Bran learns to enter a raven and later the great weirwood at Winterfell.[24]

Jon's wolf dreams intensify,[25] but he declines Melisandre's offer of guidance at Castle Black.[26] Jon is wary of the wildling skinchanger Borroq.[27][28]

Ser Jared Frey claims that Robb and his northmen were wargs who turned into wolves during the Red Wedding.[29]

Alysane Mormont tells Asha Greyjoy, perhaps jokingly, that House Mormont women are skinchangers who turn into bears and find mates in the woods.[30]

Having been blinded at the House of Black and White, Arya dreams of being the night wolf and sees through the eyes of a cat.[31]

According to semi-canon sources, the current generation of Stark children are all skinchangers to greater or lesser degrees, but only Bran Stark has been actively training his ability.[32][33]

Bran: You're a greenseer.
Jojen: No, only a boy who dreams. The greenseers were more than that. They were wargs as well, as you are, and the greatest of them could wear the skins of any beast that flies or swims or crawls, and could look through the eyes of the weirwoods as well, and see the truth that lies beneath the world.[8]

Can a bird hate? Jon had slain the wilding Orell, but some part of the man remained within the eagle. The golden eyes looked out on him with cold malevolence.[7]

Orell was withering inside his feathers, so I took the eagle for my own. But the joining works both ways, warg. Orell lives inside me now, whispering how much he hates you. And I can soar above the Wall, and see with eagle eyes.[6]

Look! The beast that tore the life from Halfhand. A warg walks among us, brothers. A WARG! This ... this creature is not fit to lead us! This beastling is not fit to live![1]

—Janos Slynt to the Night's Watch

They say you forget. When the man's flesh dies, his spirit lives on inside the beast, but every day his memory fades, and the beast becomes a little less a warg, a little more a wolf, until nothing of the man is left and only the beast remains.[4]

Slipping into a dog's skin was like putting on an old boot, its leather softened by wear. As a boot was shaped to accept a foot, a dog was shaped to accept a collar, even a collar no human eye could see. Wolves were harder. A man might befriend a wolf, even break a wolf, but no man could truly tame a wolf.[4]

The free folk fear skinchangers, but they honor us as well. South of the Wall, the kneelers hunt us down and butcher us like pigs.[4]

The big stableboy no longer fought him as he had the first time, back in the lake tower during the storm. Like a dog who has had all the fight whipped out of him, Hodor would curl up and hide whenever Bran reached out for him. His hiding place was somewhere deep within him, a pit where not even Bran could touch him.[24]