Skulls of the Targaryen dragons 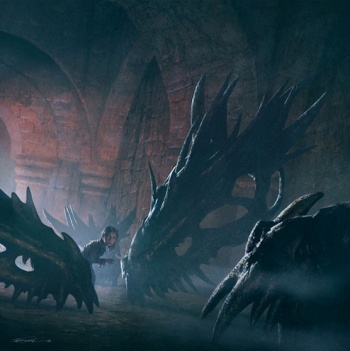 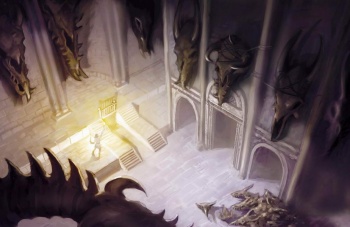 After the fall of House Targaryen, King Robert I Baratheon replaced the dragon skulls with banners and tapestries.[2] The skulls were stored in a dank cellar in the Red Keep where they remain.[3]

There are nineteen skulls of various sizes. Some of the skulls have been identified but the identity of most of the dragon skulls are unknown. It is possible that some of the dragon skulls may have been brought to Westeros by the Targaryens when they fled Valyria prior to the Doom. George R. R. Martin has said that there were once dragons all over,[4] so it is possible some skulls could have originated from Westeros.

On the way to the Wall Tyrion Lannister remembers seeking out the dragon skulls in King's Landing the first time he was there. He recalls having a torch with him when he discovered the skulls and having the sensation that they seemed to like it when he put his torch to them. There were three skulls much larger than the others, the ones that belonged to Vhagar, Meraxes and Balerion.[5]

Arya Stark ends up lost in a dark cellar in the Red Keep, and in the gloom she finds the dragon skulls all around her. Initially she is afraid, but she soon overcomes her fear and makes her way over to touch one of the monsters. She can tell it is bone and that it is dead, but has a feeling that it knows she is there and that it does not love her.[3]

In Qarth Daenerys Targaryen sees the dragon skulls in the Red Keep's throne room in one of her visions in the House of the Undying.[7]

Arstan Whitebeard tells Daenerys Targaryen that he served for a time in King's Landing and walked beneath the dragon skulls that looked down from the walls of King Aerys II Targaryen's throne room. Dany tells him that her brother Viserys talked about those skulls. She tells Arstan that Robert I Baratheon took them down and hid them away, as he could not bear them looking down on him upon his stolen throne.[8]

Tyrion Lannister and Shae rendezvous in the cellar amongst the dragon skulls.[1] 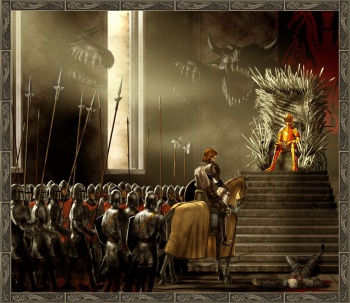 I rode the length of the hall in silence, between the long rows of dragon skulls. It felt as though they were watching me, somehow.[9]

Finally a great pair of bronze doors appeared to her left, grander than the rest. They swung open as she neared, and she had to stop and look. Beyond loomed a cavernous stone hall, the largest she had ever seen. The skulls of dead dragons looked down from its walls.[7]

Beneath the empty eyes of the skulls, Jaime hauled the last dragon king bodily off the steps.[10]

A vague light was leaking through the row of long narrow windows set high in the cellar wall. The skulls of the Targaryen dragons were emerging from the darkness around them, black amidst grey.[1]