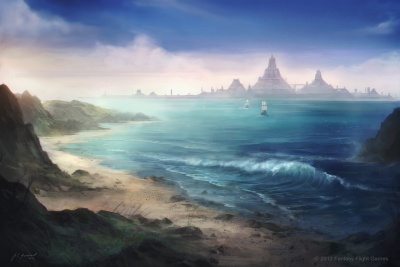 Slaver's Bay with the city of Yunkai in the background - by Juan Carlos Barquet. © Fantasy Flight Games 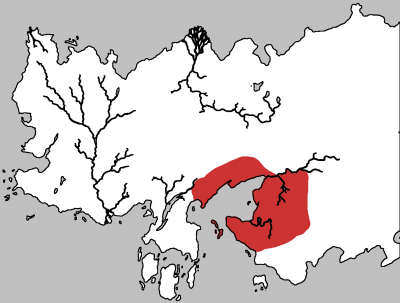 The location of Slaver's Bay on the continent of Essos 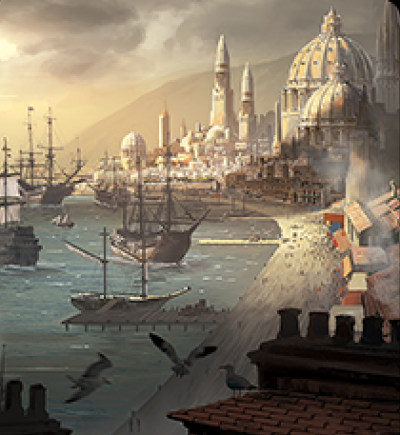 Slaver's Bay is a cultural and geographical region of central Essos. Built from the ashes of the Old Empire of Ghis, Slaver's Bay became a wealthy hub of the global slave trade. It flows into the Gulf of Grief.[1]

Slaver's Bay is located along the south of central Essos. In the west it reaches the eastern shores of the Valyrian peninsula and contains isle of Elyria. Tolos and the ruins of Bhorash are located along the Black Cliffs in the bay's north. In the east of Slaver's Bay are the isle of Yaros, the hilly peninsula of Ghiscar, and the great slave cities of Astapor, Meereen, and Yunkai. The bay is separated from the Gulf of Grief to its south by the Isle of Cedars.[2]

Descending from the Ghiscari of old, most Astapori have amber skins, broad noses, dark eyes, and black or dark red hair, or a mixture of red and black hair which is distinctive to the ancient Ghiscari.[3][10] Astapori warriors of noble birth oil and twist their hair into fantastic shapes like horns, wings, blades, and grasping hands, giving them a demonic look,[3][10] while other Astapori men might only oil their hair and beard.[10] In Yunkai and Meereen, other nobility oils and twists their hair into multiple shapes as well, using combs, wax, and irons.[6][7][11] The Yunkai'i wear tall helms in order to preserve the stylings.[6]

In all three of the slaver cities, freeborn men and women wear tokars,[10][6][7] which is a sign of power, as the wearer is required to hold onto the fabric with one hand whilst wearing it.[7] The fringe on the tokar signifies a person's status.[10]

Slavery is the dominant industry of Slaver's Bay. Stories told about the flesh marts of the slave cities are dire and frightening.[12] The cities' slave traders form their ruling aristocracy. The slavers of Astapor, Yunkai, and Meereen call themselves the Good,[10][13] Wise,[6][13] and Great Masters[4][14] respectively.

The Good Masters are rivals of one another when dealing in bed slaves, fieldhands, scribes, craftsmen, and tutors. However, when dealing in their far-famed eunuch soldier slaves, the Unsullied, they work together as allies.[10] Trained from a young age, the Unsullied are trained to be obedient, fearless warriors who feel no pain.[3] The Astapori claim that the Unsullied are the lockstep legions of the Old Empire come again, although unlike the soldiers of these ancient legions, the Unsullied are not free men.[3][13] Yunkai is known for training bed slaves who are taught the way of the seven sighs and the sixteen seats of pleasure.[6] Meereen's fighting pits are far-famed across the world, drawing trade to the city.[7][15] Warriors are bred and trained in the fighting pits,[12][14] and sold across Essos.

The Dothraki deliver many of the slaves trained and sold on the slave markets of the slaver cities on Slaver's Bay.[13]

Copper is plentiful in the Ghiscari hills near Meereen.[16] Ghiscari wine, made from small pale yellow grapes native to the regions, produces a notably inferior vintage.[7][17]

Ruled by the Good Masters, Astapor is far-famed for its eunuch slave soldiers, the Unsullied. Trained from a young age, these men are trained to be obedient and fearless.[3] The Astapori like to claim that the Unsullied are the lockstep legions of the Old Empire of Ghis come again, but unlike these ancient legions, the Unsullied are not free men.[3][13] An old rhyme about Astapor says "Bricks and blood built Astapor, and bricks and blood her people," referring to the red bricks of which the city is built taking their color from the blood of the slaves who made them.[13][3] Astapor is also known as the Red City.[18]

The Astapori emblem is a variation on the harpy of Old Ghis, which shows a chain with open manacles at either end in the harpy's talons.[3]

Yunkai is ruled by cunning[19] and corrupted[13] slavers called the Wise Masters.[6][13] The city is also known as the Yellow City, referring to the yellow bricks the city is made of.[6] Yunkai is known for training bed slaves who are taught the way of the seven sighs and the sixteen seats of pleasure.[6]

The Yunkish emblem is a variation on the harpy of Old Ghis, which shows the harpy grasping a whip and an iron collar in its talons.[6]

The largest[4] and most formidable of the cities along Slaver's Bay,[13] Meereen is as large as Astapor and Yunkai combined. The city is made of brick, but unlike Astapor and Yunkai, Meereen's bricks are of many different colors.[4] The nobility of Meereen lives in stepped pyramids, each made of a different set of colors.[N 1] The greatest pyramid of them all is the Great Pyramid, located on Meereen's central plaza,[20] which stands eight hundred feet tall.[4] The slavers who rule Meereen are called the Great Masters.[4][14]

Like the other slaver cities of Ghiscari descent, Meereen uses a harpy as its emblem.[4]

The ancient city of Ghis, in Ghiscar along the Gulf of Grief, was one of the oldest known cultures and nations in the world. Its founding and golden age predate that of its successor, Valyria, by thousands of years. The city grew into a military, economic and cultural powerhouse, the Old Empire of Ghis. From Ghiscar, the empire conquered and colonized the east of Slaver's Bay.[13]

At its height, Ghis fielded highly-disciplined lockstep legions reputed to have been nearly unbeatable on the battlefield. The architecture of Ghis was dominated by massive brick towers and pyramids built on the back of slave labor. Its symbol was the harpy, a fanged woman with leathery wings for arms, the legs of an eagle, and the tail of a scorpion, clutching a thunderbolt in her talons.[3]

The Old Empire fell over five thousand years ago after warring with the Valyrian Freehold to the west, losing a series of five wars with Valyria before toppling. Despite its wealth and nearly invincible legions, Ghis could not stand against Valyria's ultimate weapon, dragons.[13]

As the Old Empire collapsed, the city of Ghis toppled into ruin and most Ghiscari bloodlines were extinguished or enslaved. The Ghiscari language was replaced with High Valyrian[13] spoken in local dialects.[6]

The Valyrian peninsula was destroyed in the Doom of Valyria, causing chaos in the rest of the Freehold.[21] Astapor, Yunkai, and Meereen, once lowly colonies along Slaver's Bay, rose into prominence and thrived after the Doom. These cities reestablished themselves as hubs of the global slave trade and became wealthy.[13]

Astapor is conquered by Daenerys Targaryen after she purchases the city's entire population of Unsullied and sends them against the helpless Good Masters.[10] Daenerys sets up a new government headed by a healer, a priest and a scholar. After she leaves, however, a former butcher named Cleon seizes control of the city and reinstates slavery, only with the former slaves as the new masters. Cleon the Butcher King sends Daenerys gifts and wedding invitations, though shes does not approve of his rule.[14]

After the fall of Astapor, Yunkai girds itself with a slave army of approximately four thousand and purchases the services of the Second Sons and Stormcrows, totaling over one thousand sellswords. Daenerys lures the Stormcrows to her service and ambushes the Second Sons, scattering them. The Wise Masters surrender and release all of their slaves.[6]

Meereen utilizes a scorched earth defense against Daenerys, razing the land surrounding the city and nailing slave children onto posts with their fingers pointing to the city. Outside the city's gates, Oznak zo Pahl challenges Daenerys's forces but is slain by Strong Belwas.[4] In order to avoid an extended siege, Daenerys has a small group infiltrate the city and free the enslaved pit fighters of the fighting pits. They use the ensuing chaos to open the gates and force a surrender. Daenerys has a number of the Great Masters executed, then linger in the city to rule as its queen.[14]

While Daenerys attempts to rule in Meereen, Astapor is conquered by Yunkai and New Ghis.[18] The Yunkai'i then lead another siege of Meereen.