Sphinx at the Gates, by Andrew Bosley © Fantasy Flight Games
This article is about the mythical creature. For the acolyte, see Alleras.

A sphinx is a mythical creature with the body parts of existing animals, such as having a human face, the body of a lion, and the wings of a hawk.[1] 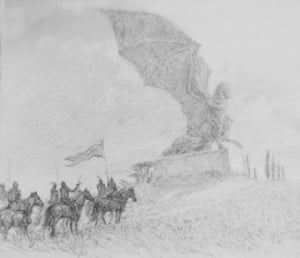 Valyrian sphinx beside a road, by Marc Fishman ©

In tales, sphinxes speak in riddles,[1] including far-fetched stories of dragons riddling with them.[1][2]

The gates of the Citadel are flanked by a pair of towering green sphinxes[3] with eyes of onyx.[1] They have the bodies of lions, the wings of eagles, and the tails of serpents. One has a man's face, and the other a woman's.[3]

The gateway to the Long Bridge in Volantis is a black stone arch carved with sphinxes, manticores, dragons, and other creatures.[4]

Statues of Valyrian sphinxes in the Velvet Hills have human faces and the bodies of dragons.[5]

The small council chamber door in the Red Keep is flanked by a pair of Valyrian sphinxes with eyes of polished garnets smoldering in black marble faces.[6][7]

As Tyrion Lannister enters the chambers of the small council in the Red Keep, he pauses to admire the Valyrian sphinxes at its entrance, and he rests his hand on the head of one of them.[8] 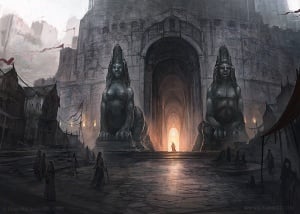 Alleras, also called the Sphinx, is a novice studying at the Citadel.[1] His dark eyes remind Pate of the onyx-eyed sphinxes at the Citadel gates,[1] and Archmaester Marwyn refers to him as a Dornish sphinx.[3]

Euron Greyjoy uses plunder from half a hundred distant lands to bind the ironmen to him. Among the plunder are ancient Valyrian sphinxes.[9]

While traveling in the Velvet Hills, Tyrion sees a huge Valyrian sphinx with a dragon's body and a woman's face crouched beside the road. Illyrio Mopatis explains that the accompanying male sphinx was dragged off its nearby plinth and taken by the Dothraki on wooden wheels to Vaes Dothrak.[5]

In visions seen by Aeron Damphair, after being forced by Euron Greyjoy to drink shade of the evening, Aeron sees Euron blow a great horn, causing dragons, krakens, and sphinxes to come at his command and bow before him.[10]

Sphinxes always speak in riddles in the tales.[1]

The sphinx is the riddle, not the riddler. Do you know what that means?[3]