Stoney Sept
The riverlands and the location of Stoney Sept

Stoney Sept is a walled town in the southern riverlands. It is located south of Acorn Hall, southeast of Pinkmaiden, and north of the Goldroad.[1] The headwaters of the Blackwater Rush are nearby.[2]

The heart of Stoney Sept is a market square with a fountain in the shape of a leaping trout. A brothel known as the Peach is located on the east side of the market.[3]

The town's namesake old sept sits on a hill. Below it is a stout holdfast of grey stone.[3][N 1] Bronze bells and silver chimes can be heard throughout Stoney Sept.[4]

The bells of Stoney Sept rang in celebration after King Harwyn Hoare's victory over King Arrec Durrandon in the battle at Fairmarket, but Harwyn subsequently claimed the riverlands for himself instead of granting the rivermen independence.[5]

During Aegon's Conquest, Stoney Sept was the gathering place for Aegon I Targaryen and his sisters, Visenya and Rhaenys, prior to the Field of Fire.[6]

Hundreds of Warrior's Sons from Stoney Sept fought against King Maegor I Targaryen at the Great Fork of the Blackwater during the Faith Militant uprising.[7] While in the town, Septon Moon denounced Maegor's plans to wed three wives at the same time.[8]

When King Jaehaerys I Targaryen visited Stoney Sept in 53 AC, Jennis Templeton held a women's court in the town on behalf of Queen Alysanne Targaryen.[9] 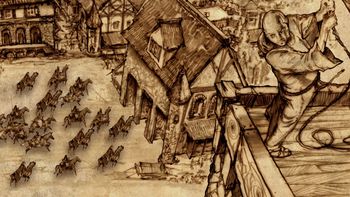 The Battle of the Bells, from Game of Thrones Blu-ray

Widow Fairs were held at Stoney Sept after the Dance of the Dragons.[10] Septon Eustace returned to the town of his birth after being dismissed by Lord Unwin Peake.[11]

It was rumored that Ser Bennis of the Brown Shield once killed a knight near Stoney Sept.[12] Ser Duncan the Tall and Prince Aegon Targaryen were in the town prior to the Second Blackfyre Rebellion. A hunchbacked septon spoke treason in the town square about Lord Brynden Rivers, so his head was displayed above the town gates after his execution.[13]

During Robert's Rebellion, Lord Robert Baratheon hid in Stoney Sept from a royal army led by Lord Jon Connington, Hand of the King to Aerys II Targaryen.[14] Jon's men searched from house to house and hostages were hung in cages,[14] but the townsfolk moved Robert from one hiding place to another, including the Peach.[3] When Robert's allies, Lords Eddard Stark and Hoster Tully, arrived at Stoney Sept, Robert defeated Jon in the Battle of the Bells, forcing the Hand to retreat.[14] After the battle, Ser Barristan Selmy and Ser Jonothor Darry rode to Stoney Sept to rally surviving royalists.[15] 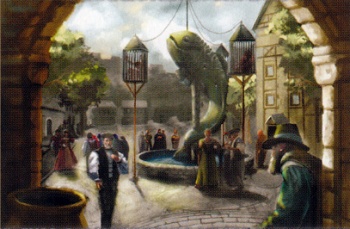 Ser Wilbert, a prominent knight from Stoney Sept, is slain by Lannister raiders early in the War of the Five Kings.[3] Wilbert's sons ride to the westerlands with Robb Stark, King of the Trident.[3] Lannisters also attack the household of the Mad Huntsman, raping his wife and his sister.[3] Besides Lannisters, Stoney Sept is also attacked by northmen and Brave Companions.[3]

The town is supportive of the brotherhood without banners. Lady Ravella Smallwood tells Harwin there is famine around Stoney Sept and the Threepenny Wood.[16] When Arya Stark visits the town with the brotherhood, she finds its gates have been rebuilt with new wood and every third house is burned and empty. An alehouse has been reduced to rubble, and the Peach's roof is rebuilt.[3]

After the Mad Huntsman captures northmen accused of crimes committed at Tumbler's Falls, he imprisons them in crow cages in Stoney Sept's square. Anguy puts the surviving prisoners out of their misery.[3] Arya and her outlaw companions stay overnight at the Peach, and the next day the Mad Huntsman returns with a captured Sandor Clegane.[3][17]

The whole town was a nest of traitors. At the end they had the usurper hidden in a brothel. What sort of king was that, who would hide behind the skirts of women? Yet whilst the search dragged on, Eddard Stark and Hoster Tully came down upon the town with a rebel army. Bells and battle followed, and Robert emerged from his brothel with a blade in hand, and almost slew Jon on the steps of the old sept that gave the town its name.[14]