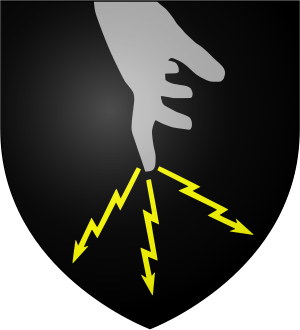 The sigil of House Kenning of Harlaw depicts lightning flashing from the Storm God's hand.

The Storm God[1] or storm god[2] is a god of the ironborn of the Iron Islands. The eternal enemy of the Drowned God, he lives in a cloudy hall and ravens are his creatures.[1] He sets snares to lure the ironborn to their destruction and sends storms at sea. The hand of the storm god is included in the sigil of House Kenning of Harlaw.[2]

After the Grey King killed the first sea dragon, Nagga, the Drowned God turned the beast's bones to stone. From her bones the Grey King made his hall, which he heated with Nagga's living fire. For a thousand years he reigned, during which he plotted his war against the Storm God. When the Grey King died, the Storm God snuffed out the fire.[3]

Aeron Greyjoy believes the Storm God in his wrath plucked Balon Greyjoy from Pyke and cast him down, but he is now feasting in the watery halls of the Drowned God.[1]

It is whispered that Euron Greyjoy and his warlocks offered a blood sacrifice to appease the Storm God. This allowed his ships to sail far to the west in the Sunset Sea, rather than hugging the coast of Westeros, thereby enabling the taking of the Shields to be a surprise.[4]