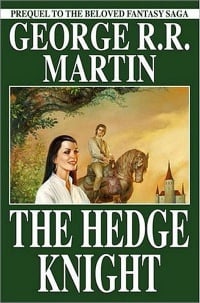 The adaptations originally appeared in two comic book limited series of six issues each, with collected editions distributed by Marvel Comics. Foreign-language translations have been published by Milady Graphics in France, Bolsillo in Spain, and Panini in Germany.

Out of print in English for several years, the two graphic novel collections were reprinted by Jet City Comics in 2014, under the titles of The Hedge Knight: The Graphic Novel and The Sworn Sword: The Graphic Novel.

The Hedge Knight single issue comics, adapting the first Dunk and Egg novella, were published by Image Comics (for issues #1-3) and Devil's Due Publishing (for issues #4-6) between 2003 and 2004. Retailer incentive variant covers were supplied by noted fantasy artists including the Brothers Hildebrant, Boris Vallejo and Julie Bell, and Ted Nasmith. Issue #1 contains a foreword from Robert Silverberg introducing the Dunk and Egg series.

The collected graphic novel was published in three editions.

The first edition contains two additional pages of art depicting a scene from the First Blackfyre Rebellion, which was later incorporated into The Hedge Knight II: Sworn Sword. It also includes a roll of arms depicting the shields of the participants of the tourney at Ashford Meadow.[N 1]

Additional supplements in further collected editions include portrait art from Amok and a preview of the adaptation of The Sworn Sword. 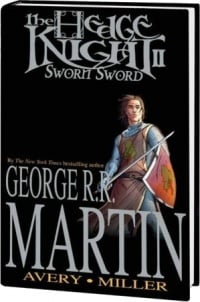 The Hedge Knight II: Sworn Sword single comics, adapting the second Dunk and Egg novella, The Sworn Sword, were published in six issues by Marvel Comics between 2007 and 2008.

Issue #3 is an over-sized 28-page issue which incorporates the First Blackfyre Rebellion two-page story which was included as a bonus in The Hedge Knight collected edition, as well as an interview with George R. R. Martin.

The collected graphic novel was published in two editions: a hardcover and a trade paperback.

The Mystery Knight: A Graphic Novel