Tom of Sevenstreams, also known as Tom o' Sevens or Tom Sevenstrings, is a singer and a member of the brotherhood without banners.[1]

Tom looks around fifty years old. He is small and trim with thinning brown hair. He has thin, foxy appearances with a sharp nose and a wide smile.[1][4] He wears patched, faded greens[4] and wields a woodman's axe and throwing knives.[1] He sometimes wears a hat.[5]

Tom is a singer and plays a woodharp, which he occasionally plucks when he talks.[1][2] He has a dubious reputation.[6] Tom often half sings his speech[7] and makes up songs.[1] Tom's voice is less harsh than Lem's[4] and he claims to know more bawdy songs than Whitesmile Wat.[8]

Tom comes from Sevenstreams in the northern riverlands.[4] He claims to have fathered at least seven sons long ago and claims they all have beautiful voices.[7] One of his sons supposedly resides at the Peach in Stoney Sept, though Tom does not claim him.[9]

House Tully has never been good to Tom. Tom once ran afoul of Edmure Tully when he stole a girl that Edmure was supposed to bed to take his virginity. Edmure had drunk too much and was unable to perform. Tom then made a song about a floppy fish, which led to Edmure's hatred of music.[7] Edmure's sister, Lady Lysa Arryn, once sent Tom up the high road, where the Vale mountain clans took his gold, horse, and clothes. He walked up to the Bloody Gate with nothing but his harp. There the guards made him sing "The Name Day Boy" and "The King Without Courage" before letting him pass.[10]

Tom sang at the wedding of his cousin, Ser Pate of the Blue Fork, to Amerei Frey, though his cousin never paid him.[4]

Tom once seduced Lady Ravella Smallwood with the song, "Let Me Drink Your Beauty".[7] 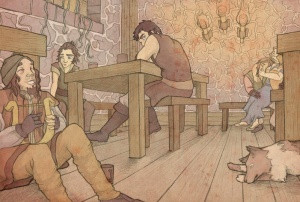 Tom, Arya Stark, and Gendry at the Peach - by mustamirri ©

Tom sings "Off to Gulltown" as he his companions, Lem and Anguy, stumble upon Arya Stark, Gendry, and Hot Pie digging in a garden. There, after a display of archery from Anguy, they force the three youths to accompany them. Tom sings "The Bear and the Maiden Fair" during the journey.[1] At the Inn of the Kneeling Man, Husband accuses Tom of impregnating Fern, but the singer explains the girl was interested in Anguy.[1]

At Sallydance Tom sings a silly song about Big Belly Ben and the High Septon's goose.[7] Tom tells Arya about High Heart, and its dwarf woman has him sing her a song about Jenny of Oldstones.[7] Arya's group meets Tom's one-time lover, Lady Ravella Smallwood, at Acorn Hall. She accuses him of seducing milkmaids with the song, "Oh, Lay My Sweet Lass Down in the Grass" Tom sings another love song after Arya and Gendry return from the castle's forge.[7] He later performs "Six Maids in a Pool", "The Maids that Bloom in Spring", and "Two Hearts That Beat as One" at the Peach in Stoney Sept.[9] When the Mad Huntsman returns to the town, his hounds are soothed by Tom's woodharp.[2] 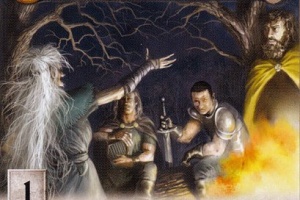 Within the hollow hill, Tom lists victims of House Lannister's violence during the War of the Five Kings to Sandor Clegane.[2] He plays a dirge after the battle at the burning septry for Brave Companions as they are hanged. At the septy's brewhouse, Tom sings "The Mother's Tears," "When Willum's Wife Was Wet," "Lord Harte Rode Out on a Rainy Day," and "The Rains of Castamere".[11] He later plays Jenny's song to the dwarf woman when the outlaws return to High Heart.[10]

Tom is playing Jenny's sad song when Merrett Frey arrives at Oldstones to ransom Petyr Frey but is captured by the brotherhood. Tom offers to release Merrett in return for the whereabouts of Sandor and Arya, but Merrett has no new information. Tom reveals that Catelyn Stark, who was slain in the Red Wedding, is still alive, and the outlaws hangs Merrett.[4]

A member of Lady Stoneheart's outlaws,[6] Tom serves for a fortnight as a musician in the company of Ser Ryman Frey during the siege of Riverrun.[8] Ser Jaime Lannister has Tom follow him after claiming the captive Lord Edmure Tully from the Freys. After Jaime is done threatening Edmure, he orders Tom to sing "The Rains of Castamere". Recognizing Tom, Edmure responds by saying, "No. Not him. Get him away from me."[8] According to a semi-canon source, Tom informs the brotherhood of Jaime's dismissal of Ryman, allowing the outlaws to ambush and hang Ryman near Fairmarket.[12]

Tom jokes he will make a song called "Talking to the Fish" about Lord Emmon Frey's speech to the people of Riverrun. When asked by Jaime why he does not depart with the Freys after Riverrun's surrender, Tom claims he hopes to replace Whitesmile Wat at Riverrun. Jaime suggests he court the favor of his aunt, Genna Lannister, instead of Riverrun's new lord, Emmon.[8] 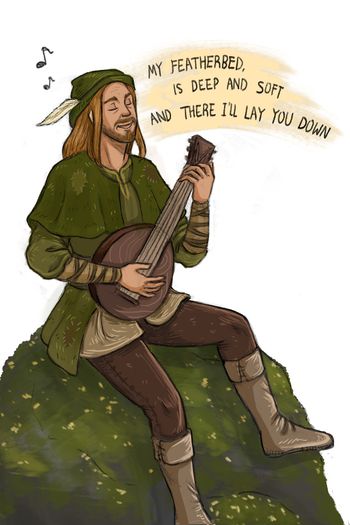 Tom singing "My Featherbed", by Gaya-the-K ©

There are worse things than dying with a song on your lips.[1]

Sometimes a man knows more than he says.[1]

If a song makes a maid want to slip off her clothes and feel the good warm sun kiss her skin, why, is that the singer's fault?[1]

Thoros: We are brothers here. Holy brothers, sworn to the realm, to our god, and to each other.


Tom: The brotherhood without banners. The knights of the hollow hill.


Sandor: Knights? Dondarrion's a knight, but the rest of you are the sorriest lot of outlaws and broken men I've ever seen.[2]
—Thoros, Tom, and Sandor Clegane

Tom: I know better songs than 'The Rains of Castamere.' I could have played you ... oh, all sorts o' things.


Jaime: Some other time. Do you have a name?
Tom: Tom of Sevenstreams, if it please my lord. Most call me Tom o' Sevens, though.

The riverlands are full of maids you've pleased, all drinking tansy tea. You'd think a man as old as you would know to spill his seed on their bellies. Men will be calling you Tom Sevensons before much longer.[7]

We're outlaws. Outlaws steal. It's in the songs, if you ask nice Tom may sing you one.[11]

Fifty if he's a day, thought Jaime, a hedge harp, and hard used by life.[8]