From A Wiki of Ice and Fire
(Redirected from Trial by battle)
Jump to: navigation, search

Trial by combat or trial by battle is a custom and method of law and justice used in Westeros to determine the guilt or innocence of a person. A trial by combat is usually fought between two people, although a variation known as a trial of seven exists.[1] 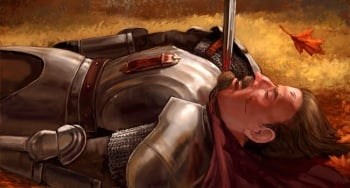 Trial by battle, by Nicole Cardiff ©

When a person is accused of a crime, especially when he or she is highborn, that person cannot be denied a trial where the highest ranking lord or lords sit in judgement.[2] At any point before or during a trial, one can request a trial by combat, in which the accuser and accused ask the gods to decide the issue between them.[1] Knights, no matter their status of birth, cannot be denied a trial by combat.[1] Highborn women accused of a crime can request a trial by battle as well, although a champion will fight in their stead.[3] Men who are no warriors can request a champion to fight for them as well.[2] The trial by combat ends when the accuser yields and withdraws the accusations,[1] or when one of the fighters die.

A trial of seven can be requested in rare instances, such as when a person is accused by multiple people. In this ancient form of a trial by combat, seven champions fight on each side, as the Andals believed that doing so would honor the gods feel and make them more likely to ensure that a just result is achieved.[1] 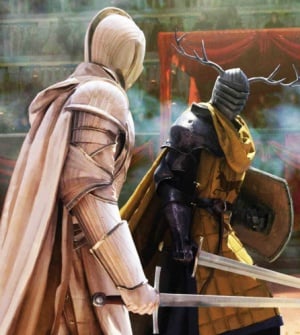 Ser Duncan the Tall fighting Lord Lyonel Baratheon, as depicted by Chase Stone in The World of Ice & Fire.

Trial of seven, originally a religious ceremony,[5] is a form of trial by combat which was brought across the narrow sea during the coming of the Andals to Westeros.[1]

In 42 AC, during the Faith Militant uprising, King Maegor I Targaryen claimed the Iron Throne after the death of his brother, King Aenys I. When Maegor arrived with his mother, Dowager Queen Visenya Targaryen, in King's Landing, she challenged all in the city who opposed Maegor's right to the throne. Ser Damon Morrigen, the Grand Captain of the Warrior's Sons, accepted her challenge. After Maegor insisted upon a trial by combat, the king accepted Morgan's proposal of a trial of seven.[N 1] Maegor was the only survivor of the ensuing battle.[6][7]

In 48 AC, Ser Harrold Langward, one of Maegor's Kingsguard, demanded a trial by combat instead of joining the Night's Watch. The fourteen-year-old King Jaehaerys I Targaryen wished to face the knight himself, but his mother, Queen Regent Alyssa Velaryon, forbade it. Ser Gyles Morrigen acted as the crown's champion instead and slew Harrold.[8]

In 84 AC, Ser Braxton Beesbury asked for trial by combat after being accused of seducing Jaehaerys's daughter, Saera Targaryen. Jaehaerys decided to face the younger Braxton personally. After Braxton tired himself during the trial, Jaehaerys slew him with Blackfyre.[9]

In the regency of Aegon III, Ser Victor Risley demanded a trial by combat after being accused of treason. He was slain by Ser Gareth Long.[10]

During the reign of King Aegon IV Targaryen, Queen Naerys Targaryen was accused of adultery and treason by Ser Morgil Hastwyck. Naerys's brother, Prince Aemon Targaryen, defended his sister's honor in a trial by combat and slew Morgil, thereby disproving the accusations.[11][12][3] This event became famous and inspired many songs, stories and fables by bards, furthering Aemon the Dragonknight's renown, much to Aegon's annoyance.[12]

In 209 AC during the tourney at Ashford Meadow, several events led to a trial of seven in which Prince Aerion and Prince Daeron Targaryen accused a hedge knight, Ser Duncan the Tall. Although both princes eventually withdrew their accusations, the trial ended with the crown prince, Baelor Targaryen, among the deceased.[1]

Lyonel Baratheon, Lord of Storm's End during the reign of King Aegon V Targaryen, rebelled against the Iron Throne when Prince Duncan Targaryen broke his betrothal to Lyonel's daughter. The rebellion was eventually settled in a trial by combat between Lyonel and Aegon's champion, Duncan the Tall, by then a knight of the Kingsguard.[13]

In 282 AC, Lord Rickard Stark demanded a trial by combat when called to answer for the alleged crimes of his son, Brandon Stark, and King Aerys II Targaryen granted the request. When Rickard, dressed in his armor, was brought to the throne room, however, Aerys named fire as the champion of House Targaryen. The king declared that in order to prove his innocence, all Rickard had to do was not burn. Aerys then had Rickard suspended from the rafters while a fire was lit beneath him. Rickard cooked in his armor as his cloak burned away and his armor melted in the heat.[14]

When accused of the murder of Lord Jon Arryn by Lady Lysa Arryn and of the attempted murder of Bran Stark by Lady Catelyn Stark, Tyrion Lannister requests a trial by combat at the Eyrie. Bronn champions for Tyrion and Ser Vardis Egen, captain of the Arryn guard, champions for Lysa.[2] Bronn slays Vardis in the duel and Tyrion is released.[15]

King Joffrey I Baratheon often rules that disputes should be resolved by trial by combat, usually to the death.[16][17][18]

Sandor Clegane is accused of murdering Mycah. Ser Beric Dondarrion decides to judge him by combat and loses,[19] therefore decreeing Sandor innocent of that crime.

When Tyrion is accused in the murder of King Joffrey, Prince Oberyn Martell offers to be his champion in trial by combat.[4] Ser Gregor Clegane represents Tyrion's accuser, Queen Regent Cersei Lannister.[20] Although Oberyn severely wounds Gregor and forces the Mountain to admit to having murdered Elia Martell and Aegon Targaryen in the Sack of King's Landing, Gregor manages to crush his opponent's skull.[20]

The accusations directed towards Margaery Tyrell and Cersei by the Faith of the Seven make both consider demanding trial by combat. Their status as queens makes it necessary for both to choose from the Kingsguard at a time when the order's ranks are depleted. Cersei writes a letter to Ser Jaime Lannister, her brother and the Lord Commander of the Kingsguard, currently in the riverlands, asking him to return to King's Landing to be her champion, but Jaime has the letter burned.[3]

After learning of Jaime's disappearance, Cersei must choose a new champion from the Kingsguard for her trial by combat.[21] Ser Robert Strong is the eventual choice.[22][23]

In any trial by combat, the accuser and accused are asking the gods to decide the issue between them.[1]

—Baelor Targaryen to Duncan the Tall

The gods know the truth of my innocence. I will have their verdict, not the judgment of men. I demand trial by combat.[2]

Tyrion: I presume that House Arryn remembers its own words. As High as Honor.


Robert: You promised I could make him fly.


Lysa: The gods have seen fit to proclaim him innocent, child. We have no choice but to free him.[15]
—Tyrion Lannister, Robert Arryn, and Lysa Arryn

Obara: My father has been murdered.
Doran: He was slain in single combat during a trial by battle. By law, that is no murder.[24]