Trident
The riverlands and the location of the Trident

The Trident is a major river in the riverlands of the Seven Kingdoms. Made of numerous smaller tributaries, it is one of the largest rivers on the continent of Westeros. It is a confluence of three main branches, the Red Fork, the Green Fork, and the Blue Fork.[1] 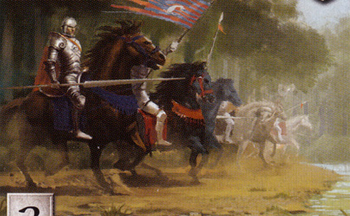 The Red Fork of the Trident begins in the foothills of the westerlands. The meandering[2] river flows northeast past Pinkmaiden Castle toward Riverrun, where it is joined by the Tumblestone. The Red Fork continues east through the riverlands, with the lands of House Bracken to the south and those of House Blackwood north of the river.[3]

The Green Fork of the Trident begins in the swamps of the Neck and flows southeast through the lands of House Frey, with the kingsroad nearby.[4] There is no crossing on the river between the Twins and the ruby ford on the Trident.[5]

Beginning in rills and marshes near Sevenstreams south of the Twins,[6] the Blue Fork of the Trident flows southeast between the Red Fork and the Green Fork.[4] At least two towns, Ramsford and Fairmarket, lie on the Blue Fork,[6] and Seagard lies near its headwaters.[7] The ancient castle called Oldstones is also on the Blue Fork.[6]

All branches of the Trident are swifter and at least twice as wide as the Little Rhoyne in Essos.[8] The Green Fork and the Blue Fork meet first, and the enlarged river is then joined by the Red Fork west of Lord Harroway's Town and the crossroads.[4] The Trident then continues east past the ruby ford[9] and eventually flows into the Bay of Crabs.[10] Saltpans and the Quiet Isle are located at the broad[11] mouth of the Trident,[12] with fields and farms found nearby.[10] Darry and Harrenhal are south of the Trident.[13]

Other tributaries of the Trident include the Big Willow and the Darry.[14]

The forks of the Trident are the easiest way to move goods and men across the riverlands, with common sights including fisherfolk on skiffs, grain barges, floating shops, mummers' boats,[2] and river galleys.[2][10] The rivers can have lines of poleboats stretching for a mile.[1] The ruby ford and the Twins are two of the major crossings over the rivers. The Trident and its branches can be effective barriers during wartime, but they can also facilitate quick travel by longship.[1]

The colors of the Trident's branches are represented in the arms of Houses Shawney and Strong, and the river kings from House Teague used a trident in their sigil.

Tristifer IV Mudd, King of the Rivers and the Hills, ruled from the Trident to the Neck.[6] During the coming of the Andals to Westeros, the newcomers used longships to sail up the Trident and its tributaries to attack the kingdoms of the First Men.[1]

During Aegon's Conquest, Lord Edmyn Tully of Riverrun declared for Aegon I Targaryen and led the river lords of the Trident in rebellion against Harren Hoare, King of the Isles and the Rivers. After the burning of Harrenhal, Aegon the Conqueror named Edmyn his Lord Paramount of the Trident.[15] Later during the war, Torrhen Stark, King in the North, marched a great northern host to the banks of the Trident. Instead of fighting, Torrhen chose to submit to Aegon on the south bank.[15] The Inn of the Kneeling Man is allegedly located where the two kings met.[16]

Prince Maegor Targaryen hunted down the Giant of the Trident, a robber knight, in 31 AC.[17] Thousands of Poor Fellows haunted the Trident during the Faith Militant uprising.[17] 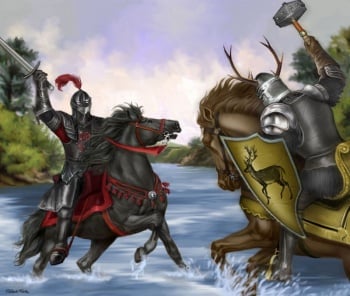 The Battle of the Trident, by M. Luisa Giliberti ©

Princess Rhaenyra Targaryen visited the Trident in 112 AC.[18] Most of the river lords supported Rhaenyra during the Dance of the Dragons, although the ruling Tullys were divided in intention.[19] Prince Aemond Targaryen used Vhagar to become the terror of the Trident, attacking Old Willow, White Willow, Hogg Hall, Merrydown Dell, Harrenhal, Stonyhead, Sweetwillow, Sallydance, Bowshot Bridge, Old Ferry, Crone's Mill, and Bechester.[20] Led by the Lads, however, the Lords of the Trident hastened the downfall of Aegon II Targaryen and the rise of Aegon III Targaryen.[21][22] Once the civil war ended, Alysanne Blackwood suggested that some of Lord Cregan Stark's host of northmen could marry widows and help rebuild the war-torn Trident.[23]

The inn at the crossroads once was located next to the Trident. It became known as the River Inn, since at that time the river flowed beneath its back door and half the rooms were built out over the water. It was said that the inn's guests could throw a line out their window and catch fish. There was also a ferry landing at the inn, where travelers could cross to Lord Harroway's Town and Whitewalls. However, c.220 AC-230 AC, the course of the river moved, flowing miles south of the inn.[24]

During Robert's Rebellion, Robert Baratheon, Lord of Storm's End, defeated Rhaegar Targaryen, Prince of Dragonstone, in the decisive Battle of the Trident. The site of Rhaegar's death became known as the ruby ford.[25]

Archmaester Laurent wrote Old Places of the Trident.[1] Trident Three is a war galley of the royal fleet.[26] 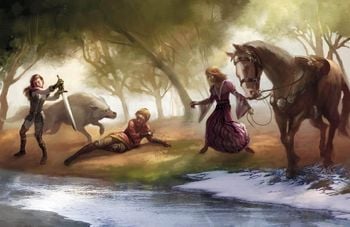 When the retinue of King Robert I Baratheon stops at the crossroads inn, Sansa Stark and Prince Joffrey Baratheon range along the woods on the northern bank of the Trident. The youths explore riverbank caves, track a shadowcat to its lair, and eat fresh trout at a nearby holdfast.[27] Near the ruby ford, however, Arya Stark tosses Joffrey's sword, Lion's Tooth, into the Trident after an altercation.[27]

Comatose after falling from the First Keep, Bran Stark sees the rushing blue-green waters of the Trident in a dream.[28]

The battle on the Green Fork takes place along the eastern bank of the Green Fork.[29] At Riverrun, Robb Stark is declared King in the North by the lords of the riverlands and the north.[30]

Fighting spreads north of the Trident almost to the Twins during the War of the Five Kings.[31] Lord Roose Bolton occupies the ruby ford.[32]

For his service in allying House Tyrell with House Lannister and House Baratheon of King's Landing, Lord Petyr Baelish receives the title Lord Paramount of the Trident, replacing Lord Hoster Tully as liege lord of the riverlands according to the Iron Throne.[33]

Robb Stark includes King of the Trident amongst his titles.[34] Robb names Ser Brynden Tully as Warden of the Southern Marches when he leaves Riverrun.[6]

Daenerys Targaryen, sister of the late Rhaegar Targaryen, has a dream of the Battle of the Trident in which she melts icy enemies with dragonflame, turning the river into a torrent.[35]

Heavy rain make the Trident and its forks overflow their banks, slowing travel for Robb and Roose as they march to the Twins.[6][36] Gregor Clegane defeats a group of northmen in the fighting at the fords of the Trident.[36][37] The green and brown torrent of the Trident looks a mile wide when it is reached by Arya and Sandor Clegane on their way to the Twins, and they find Lord Harroway's Town to be flooded.[38]

In the aftermath of the Red Wedding, Gregor crosses the Trident and seizes the ruby ford.[39] Sandor and Arya head for Saltpans after fighting the Mountain's men at the crossroads inn, and Arya notices that the once-raging Trident has died down. Arya eventually abandons the wounded Sandor to die along the banks of the river, and she continues on to Saltpans alone.[10]

The Hound is said to have crossed the Trident with a hundred outlaws.[40] Because of the raiding, Queen Cersei Lannister wants Sandor's head.[41]

Searching for Sansa Stark, Brienne of Tarth is told by Timeon that Beric Dondarrion is seeking a Stark girl who was with Sandor all along the Trident, but she does not realize that Beric's outlaws are seeking Arya instead of Sansa.[42] At the Quiet Isle, the Elder Brother tells Brienne that the Hound died in his arms along the Trident and that Sandor is at rest.[43]

Outlaws roam freely on both sides of the Trident,[44] and hundreds of wolves hunt in a great pack near the river.[13] Ser Harwyn Plumm leads a detachment from Darry to hunt outlaws.[45]

During his visits to Sisterton and White Harbor, Ser Davos Seaworth hears that Sandor Clegane is plundering and killing in the lands along the Trident.[46]

Ser Jaime Lannister expects that his work pacifying the Trident will be done once the siege of Raventree ends.[47] 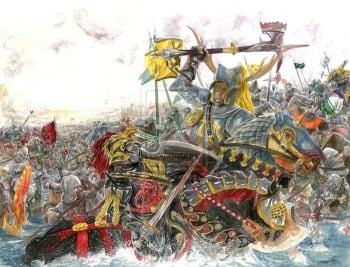 The Battle of the Trident, by Abe Papakhian ©

Eddard: Do you remember the Trident, Your Grace?
Robert: I won my crown there. How should I forget it?[48]

—Eddard Stark and Robert I Baratheon

I mean to make you liege lord of the Trident. These river lords have proven they cannot be trusted. Let them do you fealty for their lands.[49]

It is time to cross the Trident, Dany thought, as she wheeled and rode her silver back.[35]

—thoughts of Daenerys Targaryen before the fall of Astapor

Ser Brynden would hold the Trident if any man could.[6]

The river had returned meekly to its accustomed channel, Arya saw, all its wet brown rage vanished with the rains. It's tired too, she thought.[10]