Prince Trystane Nymeros Martell, better known simply as Trystane Martell, is the youngest child of the ruling Prince of Dorne, Doran Martell, and his wife, Lady Mellario of Norvos. He is affectionately called Trys by his sister Arianne.[1]

Born in 287 AC,[2] Trystane was the youngest child of his father, Prince Doran Martell, and mother, Lady Mellario of Norvos.[3] At the age of four, Trystane suffered from redspots.[4] While he was still young, his mother left Dorne and returned to Norvos, the city of her birth.[5] 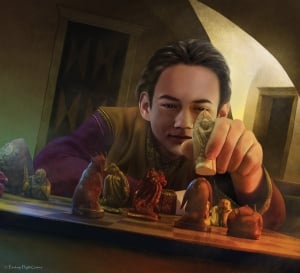 When King Joffrey I Baratheon is crowned, Trystane is summoned to court, along with his father and brother Quentyn, to swear fealty to the new King.[6]

The acting Hand of the King, Tyrion Lannister concocts a plan to prevent the Dornish from supporting Lannister enemies by suggesting a betrothal between his niece, princess Myrcella Baratheon, and Trystane. Trystane's father, Prince Doran Martell, accepts the betrothal offer, and Myrcella departs King's Landing for Sunspear together with Ser Arys Oakheart, a member of the Kingsguard.[7][8]

Lord Tywin Lannister informs to his son Tyrion that he has received a letter from Ser Arys, in which the latter writes that Trystane is enchanted with Myrcella.[9]

Trystane has becomes fond of the game cyvasse, and Myrcella has learned the rules so they can play together. Myrcella wins more often than Trystane, but as Ser Arys Oakheart notes, Trystane does not mind.[1] When Trystane's older sister, Arianne, conspires to have Myrcella crowned as ruling Queen of the Seven Kingdoms, she spirits Myrcella out of Sunspear with the help of Ser Arys. Myrcella's bedmaid, Rosamund Lannister, is left to impersonate the princess. In order to keep anyone from discovering that Myrcella is gone, Ser Arys has told the maester that Myrcella suffers from redspots. However, this does not prevent Trystane from wanting to visit her, as he already had his own redspots years before.[4]

Queen Cersei Lannister sends Ser Balon Swann to Sunspear to deliver the skull of Ser Gregor Clegane. At the welcoming feast, he presents Prince Doran Martell with a letter by Queen Cersei, in which she requests Myrcella to return home, for Prince Doran to travel to King's Landing to take up his seat on the small council, and for Trystane to come visit King's Landing. Prince Doran agrees with Ser Balon that Trystane will go to King's Landing, but later that evening, during a private meeting with his daughter Arianne, nieces Obara, Nymeria and Tyene Sand, and captain of guards Areo Hotah, Doran reveals that Queen Cersei's invitation is a ruse; Trystane is supposed to die on the way to King's Landing during an attack in the Kingswood, which will be blamed on Tyrion Lannister, and Doran is only invited so he can witness the attack personally, absolving Cersei of any blame.[10]

The two children could not have looked more different, him with his olive skin and straight black hair, her pale as milk with a mop of golden curls; light and dark, like Queen Cersei and King Robert. He prayed Myrcella would find more joy in her Dornish boy than her mother had found with her storm lord.[1]