Tyene Sand is the bastard daughter of Prince Oberyn Martell and a septa. She is one of the infamous Sand Snakes. In the television adaptation Game of Thrones she is portrayed by Rosabell Laurenti Sellers.

Tyene is fair, with golden hair and deep blue eyes.[2] Dimples bloom in her cheeks, and she has a gentle, sweet voice.[2][3]

Despite her innocent and pious persona, Tyene is regarded as treacherous. Her soft pale hands are as deadly as Obara's callused ones.[3] She shares her father Oberyn's knowledge of poisons, her chosen weapon.[2]

Tyene owns a clinging gown of pale blue samite with sleeves of Myrish lace,[2] as well as a cream and green gown with long lace sleeves.[3] Tyene is envious of Princess Myrcella Baratheon's curls.[2]

When Tyene was in the cradle her mother, a septa, read to her from The Seven-Pointed Star. Tyene spent her youth at the Water Gardens with her cousin, Princess Arianne Martell, and the two grew as close as sisters, learning to read, ride, and dance together. They have shared meals, jewelry, beds, and onetime a flagon of wine stolen by Arianne. The two would have lost their virginity together to Andrey Dalt as well, but he was premature in the encounter.[4]

Arianne once crossed the Mander with three of the Sand Snakes to visit Tyene's mother.[5] Tyene and Arianne once fled Sunspear to try to marry Arianne to Willas Tyrell at Highgarden, but they were caught by Tyene's father, Oberyn Martell, at Vaith.[4] Oberyn also once brought Tyene with Arianne and Sarella Sand to Shandystone, where he showed Tyene how to milk vipers for their venom.[5]

Doran Martell, Prince of Dorne, kept a marriage pact hidden from Arianne because he feared his daughter would not have kept it a secret from Tyene, who would then have informed her sisters, Obara and Nymeria.[4] 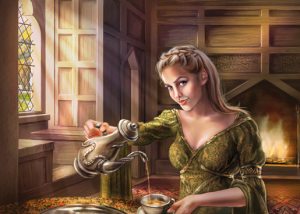 Tyene waits for Doran Martell, Prince of Dorne, in the throne room of Sunspear to demand vengeance for her father, Oberyn Martell, who was slain by Ser Gregor Clegane in King's Landing. She works on an embroidery of Oberyn armored in red atop a sand steed.[2]

Nymeria Sand wants Tyene to aid her in assassinating Lord Tywin Lannister, Queen Regent Cersei Lannister, Ser Jaime Lannister, and King Tommen I Baratheon. Tyene instead wants to crown Tommen's sister, Princess Myrcella Baratheon, as queen, and if the Lannisters and Tyrells invade Dorne they would then be slain in the Dornish mountains and sands. After Doran states that he will think about her proposal, Tyene asks for his blessing. After he lays his hand on her head, Maester Caleotte searches for scratches and puncture marks, demonstrating a fear of her knowledge of poisons.[2]

Doran has Areo Hotah detain Tyene and her sisters as a gesture of good will towards Tommen's court.[2] Tyene, Nym, and Obara are detained in the Spear Tower of Sunspear, as is Princess Arianne Martell after her own plot to crown Myrcella is foiled by Areo.[4]

Tyene, her sisters, and Arianne are released from their cells in the Spear Tower and are present at the feast when Ser Balon Swann presents the Mountain's skull to Doran. She refuses to drink when Ricasso raises a toast to King Tommen.[3]

Doran tasks Nymeria with returning Mycella to King's Landing and joining the small council. Tyene is to accompany her sister and, disguised as a septa, gain the confidence of the High Sparrow.[3] 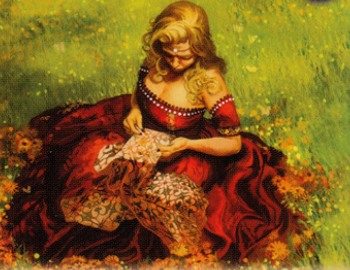 Forgive me if I gave offense; my heart is broken all to pieces.[2]

Sisters, truly, I know the poison Father used. If his spear so much as broke the Mountain's skin, Clegane is dead, I do not care how big he was. Doubt your little sister if you like, but never doubt our sire.[3]

Doran: The Swords and the Stars have been re-formed, and this new High Septon is not the puppet that the others were. Try and get close to him.
Tyene: Why not? White suits my coloring. I look so ... pure.[3] 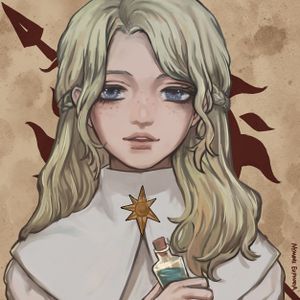 Lady Tyene's voice was gentle, and she looked as sweet as summer strawberries. Her mother had been a septa, and Tyene had an air of almost otherworldy innocence about her.[2]

I have never been as fearless as my cousins, for I was made with weaker seed, but Tyene and I are of an age and have been close as sisters since we were little girls. We have no secrets between us. If she can be imprisoned, so can I, and for the same cause ... this of Myrcella.[6]

Her hands are dangerous.[4]

Hotah studied each of them in turn. Obara, rusted nails and boiled leather, with her angry, close-set eyes and rat-brown hair. Nymeria, languid, elegant, olive-skinned, her long black braid bound up in red-gold wire. Tyene, blue-eyed and blond, a child-woman with her soft hands and little giggles.[3]